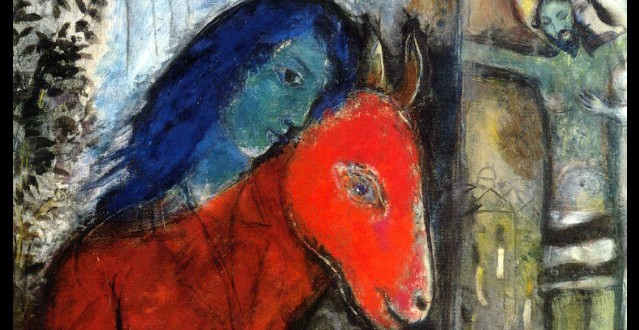 When a major exhibition on a major artist’s relatively unknown and neglected oeuvre comes by, it will be surely featured in galleryIntell’s top stories; and this week, we are talking about Marc Chagall. Chagall: Love, War & Exile will be opening on September 15, 2013, at the Jewish Museum with artworks created by the artist during the more difficult years of his life. Also featured this week are Van Gogh’s newly discovered painting, Jeff Koons’s Balloon Venus & Les Lalanne’s sheep. Read on…

Marc Chagall, ‘Self Portrait With A Clock In Front Of Crucifixion’, 1947, oil on canvas

Marc Chagall is generally associated with colorful paintings full of symbolic imagery and themes. The upcoming exhibition at the Jewish Museum in NYC will be revealing a darker side of the artist through paintings with themes ranging from war and politics to exile. These paintings were made during the period of World War II when Chagall was forced to flee from Russia to Paris with his wife and daughter. Even though they are darker in nature, the paintings remain true to his style portraying floating animals and human figures in ethereal backgrounds. Certainly for this artist, as with many others, the tragedy of war acted as an impetus for a brilliant new range of works. Source: NY Times

Cheers to Jeff Koons for being featured two weeks in a row!

In honor of the end of New York Fashion Week, it seems fitting to raise our glass once again to Jeff Koons for combining art with luxury. How did he do that? Well, by designing a $20,000 case that houses a bottle of Rose Vintage 2003 champagne by Dom Perignon, called “Balloon Venus for Dom Perignon”. Inspired by the “Venus of Willendorf” – a sculpture made approximately between 24000 BC and 22000 BC – Koons has created a bridge between commerce and art, something that artists like Yayoi Kusama and Damien Hirst have also ventured into. He was approached two years ago by the brand to create a unique piece for the famed label while he was working on Balloon Venus, and it was finally unveiled this week at an elite gala in the West Village. We hope to pop a few of these babies open at our next event! Source: Observer

A flock of concrete sheep designed by Francois-Xavier Lalanne will grace the art installation, “Sheep Station”, at an abandoned gas station at 10th Avenue and 24th Street in Chelsea, New York. These prized sheep, which have previously sold at Christie’s and Sotheby’s at well over their estimated value, belong to Paul Kasmin, art dealer, and Michael Shvo, developer and art collector. The installation opens on September 17th to the public and, will no doubt enhance the appeal of this already artistically rich neighborhood. Source: GalleristNY

Is this newly discovered Van Gogh painting not as exciting?

Van Gogh’s lost painting titled “Sunset at Montmajour” has been discovered by the good folks at the Van Gogh Museum this week. Originally thought to be a forgery and dismissed as a fake, the painting has been accused of not being a visionary work by the great Van Gogh. It is only recently that it has been definitively established as an original, as the paint from this piece has been matched exactly to Van Gogh’s palette from this time period. At the end of the day though, the discovery of even a “bad” Van Gogh is still pretty exciting news in our books. Source: The Guardian