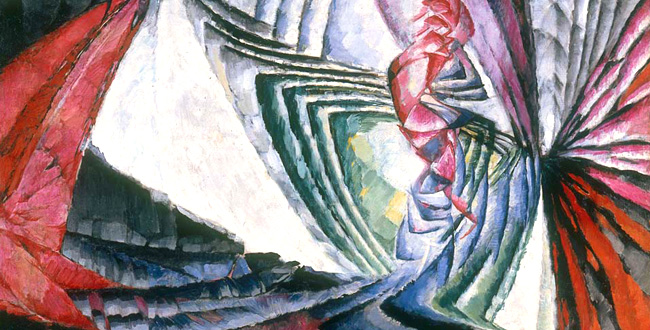 Home › Articles › Inventing Abstraction at the Museum of Modern Art

The last time MoMA mounted an overview of the history of abstraction (not counting the de Kooning retrospective) was in 2010 – 2011 when Ann Temkin brought us the expansive survey of Abstract Expressionism in New York – the mid century art movement that is largely synonymous with America in general and New York in particular.

This time around the museum is highlighting those who first brought forth the ideas that subsequently inspired Barnett Newman, Joseph Albers, Jackson Pollock, Willem de Kooning and others. Ideas and philosophies that challenged painterly conventions of the previous centuries, more specifically – deliberate departure from representational art towards pure abstraction – and invented a whole new language of expression. As Kirk Varnedoe, former Chief Curator of Painting and Sculpture at MoMA once said about this period in art history, never before has there been another time that so fundamentally changed the way we create, experience and see art. The current exhibition is a step-by-step illustration of this shift towards this de-naturalization of form and the artists’ revolutionary approach to color, line and form as the primary vehicles of communicating with the viewer. 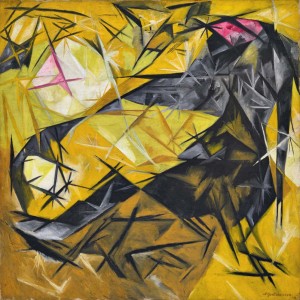 Viewers not familiar with the multi-layered theories behind these reduced and measured compositions by Kasimir Malevich, El Lissitzky, Natalia Goncharova (left), Gustav Klutsis and others will find the work easy to relate to and explore. They are often austere, yet dynamic symphonies of ovoids, triangles, squares and lines. (See Suzanne Duchamp’s Solitude Entonnoir – Funnel of Solitude, 1921 (below), or Klutsis’ “Construction – Dynamic City”, 1921.) These minimal compositions may look familiar today, but it helps to recall that the dawn of the 20th century was still the time when Monet obsessively rendered his water lilies and Seurat fastidiously labored over the Grand Jatte one paint dot at a time… This was a time of the industrial revolution, broad social and political changes that found their reflections in the changing pictorial and musical themes of the first decades of the 20th century. 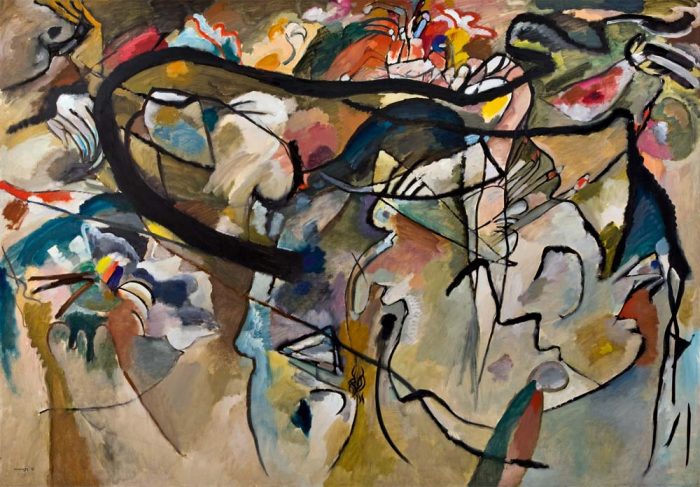 Music also played an enormous part in how this new art was created. Wagner’s influence on Kandinsky (right) is demonstrated at the very beginning of the exhibition where you can hear the music and see Kandinsky’s emotional response. Kandinsky famously discovered his synaesthesia while listening to Wagner’s “Lohengrin” in Moscow. It’s an important connection to make for anyone taking first steps in understanding Kandinsky.

While the exhibition features all the major pillars of early abstraction, with a loud omission of Georges Braque, the true treasure of this survey are the lesser-known artists. Discovering works by Lawrence Atkinson, Giacomo Balla, Wyndham Lewis, Alvin Langdon Coburn, among others, is equal to finding new  characters in a favorite book. 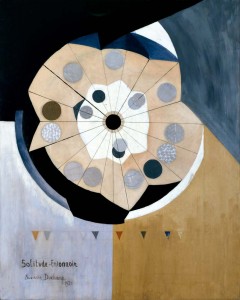 Curator Leah Dickerman should be applauded for guiding the viewers towards so many lesser-known artists and skillfully demonstrating that beyond the super stars of early Modernism (Moholy-Nagy, Kandinsky, Larionov, Delauney, Malevich, Kupka, Hartley, Leger, Mondrian, Picasso, van Doesburg, etc.) stood many others who defined, developed and promoted the innovations of the first decades of the 20th century. The exhibition feels like a couturier’s sampling of the very best examples from a private collection.

The exhibition is certain to expand your vocabulary of early abstraction and modernism, the underlaying historical, literary and cultural factors that allowed for this new visual language to cement its position in history and help better understand later innovations by Mark Rothko, Joseph Albers, Chuck Close, Spencer Finch, Richard Serra, Julian Schnabel and others.

El Lissitzky – all works on display.