“Order and surprise, intellect and imagination, conscious and unconscious. Both sides of the artist’s personality must play their part.” – Henry Moore

Osborne Samuel Gallery Ξ Understanding Moore’s statement above is a gateway to understanding his art, his yearning for making those smooth surfaces that create a tension between what seems to be an abstraction, but could be a figure after all… 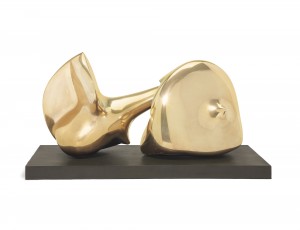 Moore’s creative thought trajectory was anything but linear. The theme of “a mother and child” occupied his mind during the initial stages of his career as a sculptor. Peter Osborne, Osborne Samuel Gallery in London tells us that this stemmed from Moore’s introduction to the Aztec imagery which he then applied to his own subjects. Talking about his obssession, Moore said, “From very early on I have had an obsession with the Mother and Child theme. It has been a universal theme from the beginning of time and some of the earliest sculptures we’ve found from the Neolithic Age are of a Mother and Child. I discovered when drawing, I could turn every little scribble, blot or smudge into a mother and child. (Later, I did the same with the Reclining Figure theme!) So that I was conditioned, as it were, to see it in everything. I suppose it could be explained as a “Mother” complex.”

Moore also drew his inspiration for forms from the familiar around him. He studied the figures of families, mothers with their children as they slept in the London Underground during The Blitz of 1940 – 1941.

Later, even as his fundamentals stayed firmly planted, his figurative forms gave way to abstraction. Separate experiences and objects somehow came together and became inspirations for his works. Mr. Osborne said, “He would take objects that interested him particularly and he would adapt those to sculptures. It could be an animal bone or even a spindle piece, or stones, and he would use these to experiment with shape, form and the tension of space. ”

Henry Moore is one of the most admired sculptors of our time whose works are highly prized by collectors worldwide. As you spend more time looking at his full range of shapes and forms, you’ll soon begin to recognize clear connections between his figurative and abstract sculptures. 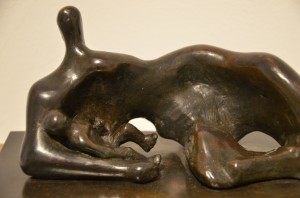 Peter Osborne: Henry Moore first studied sculpture in London in the 1920’s and he spent a lot of time in The British Museum where he was very influenced by Aztec forms, Mexican sculptures, particularly the reclining figure of the mother and child theme. So, if you look at his work, you will see how he took those principles and then adapted them modeling in clay and plaster, and then generating a whole group of really, really important bronze sculptures throughout the rest of the twentieth century. Particularly famous during the war, where he studied people sleeping in the London underground and in the subway, at that time he first began to look more closely at the theme of mother and child, and family groups.

Henry Moore was a realist sculptor in the sense that much of his work has recognizable human forms in it, but that’s not all he did. He would take objects which interested him particularly, and he would adapt those as sculptures. Maybe it was an animal bone, or in the case of the spindle piece which we have here at Art Southampton, a cotton spindle. He would use these to experiment with shape, form, and the tension of space. He was more interested in the shape itself. Pebbles, stones, rocks, tree trunks, stumps were all part of the raw material that he used to develop his work. One of our sculptures here, for example, is called “Reclining Figure Flint” because he used a flint as part of the work. That is an abstract object that, used in conjunction with some modeling and clay, became a reclining figure for the mother and child, which was perhaps the most important single subject that he addressed. Probably, he was the twentieth century’s best-known sculptor worldwide.