We continue to focus on the lesser-known masters of Post War American art and bring you a video interview with Jessica Phillips of Hackett Mill Gallery in San Francisco who talked about Conrad Marca-Relli, an Abstract Expressionist and a member of the New York School.

Marca-Relli became known for the large-scale painted collages that he constructed from painted canvas that was cut up and then adhered onto a canvas support. Some of the paintings were done in a predominantly subdued palette of whites, ochres, and blacks – a palette shared by another famous Abstract Expressionist Franz Kline, while others were much more vibrant reds, blues and rich browns. Upon closer inspection we can see that the organic shapes in Marca-Relli’s collage paintings resemble the African Gold Weights in Hale Woodruff’s paintings recently featured in an interview with Michael Rosenfeld. The artist worked side by side with de Kooning and Kline and his work is full of layered complexities. We are thrilled to be able to feature his work on galleryIntell. 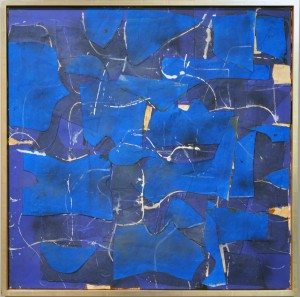 “Conrad Marca-Relli graduated from Cooper Union in 1935, and began his artistic career painting cityscapes and carnival scenes in a Surrealist manner. During his service in World War II, Marca-Relli absorbed the texture, solidity and inherent formal order of the architecture of ancient and Renaissance Rome. In 1945, he returned to New York and by 1949, he was a founding member of the “Eighth Street Club,” an artists’ group whose members included Willem de Kooning, Franz Kline and Jack Tworkov.

In 1952, Marca-Relli visited Mexico where the effects of sunlight on adobe brick buildings had a profound impact on the development of his work. During a period of experimentation, from his rented studio in San Miguel de Allende, he discovered collage.* Art historian William Agee wrote, “Marca-Relli’s achievement has been to raise collage to a scale and complexity equal to that of monumental painting. Since its inception in 1912 by Picasso and Braque, collage has undergone many formal transformations, yet it has remained a corollary to painting…Marca-Relli…developed it as a complete pictorial system essentially without precedent in modern art.”** 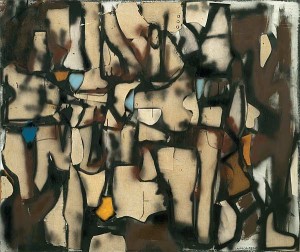 Beginning with a rough sketch on bare canvas, he pinned segments of raw canvas cut by a razor onto a supporting canvas coated with a mixture of paint and glue, often shifting the collage sections to alter the formal relationships within the composition.

Marca-Relli’s first one-man show was in New York City in 1947 at Niveau Gallery, and in 1967 the Whitney Museum hosted a retrospective of his work. His work can be found in most major museum collections, including the Smithsonian American Art Museum, Washington, D.C.; the San Francisco Museum of Modern Art; the Solomon R. Guggenheim Museum, Bilbao and New York; Museum of Modern Art, New York; and The Art Institute, Chicago, among others.” – Text courtesy of Hackett | Mill.

Jessica Phillips: At The Armory show we have put together solo exhibition of Conrad Marca-Relli. He is an artist that was part of the New York school with Jackson Pollock and Mark Rothko. He is one of the founding members of the Abstract Expressionism New York School.

We have gathered paintings from the 50’s and 60’s. I say paintings but they are really collages and that’s what Marca-Relli was famous for. He was born in Boston, he studied at Cooper Union, and then he developed this technique using collage. He would paint on canvas and then cut the pieces out and then adhere them to the canvas support. These beautiful organic forms were painted, sometimes in neutral palette, sometimes you see the bright red.

He developed this technique and really became known for it. He was slightly marginalized because he was so devoted to this technique at the time when de Kooning and Pollock were really focused on painting. These paintings with thick paint and heavy surface texture, he has that too, but he really was devoted to the collage technique. He had a show at the Whitney in 1967, a retrospective, and more recently he’s been included in the show at the Guggenheim. 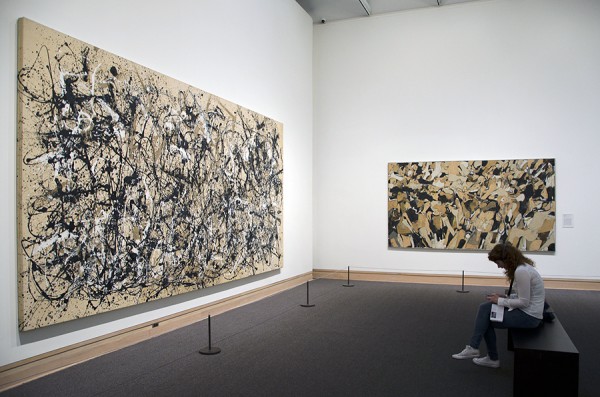 There is a beautiful collage panting of his that hangs at the Metropolitan Museum right next to Jackson Pollock’s Autumn Rhythm. Grand scale of these monumental paintings are rare and we have been collecting them and putting this show together for a little while. We borrowed a few back from private collections so we can have a cohesive exhibition and we are really excited to bring him to this New York audience. Some people are quite familiar with his work and for some it is an introduction.

This article and video interview © galleryIntell. Images featured in the video courtesy of the gallery. Selected images taken during The Armory Show and © Kristina Nazarevskaia.