Grotesque figurative forms are often rejected by the society as it attempts to turn its face away from reality. Peter Femfert, Director of Die Galerie in Frankfurt talks about the life and work of Volker Steltzmann, a 72-year-old artist with a rich history of reflecting [German] society: from the grotesque to the ordinary. Figures in Steltzman’ large-scale canvases are reminiscent of the title character in Par Lagerkvist’s strikingly sharp novel ‘The Dwarf‘ – the same seemingly exaggerated features that tend to repel the viewer at first, but at the same time pull him closer and closer into their complex and faceted stories. 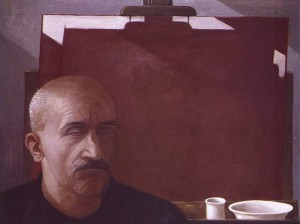 Peter Femfert: Stelzmann is a very typical German Artist. He comes from East Germany, born in Dresden, lived in Leipzig and was a professor of art in the art school in Leipzig for many years before he flew into West Germany. He escaped from East Germany about three years prior to the fall of the wall, so when he arrived in West Germany, all of his paintings that were in East Germany were confiscated – he lost everything he had, so he had to start all over again. Fortunately, as he is a very good painter, he was able to do this. He started to work again as a professor in the Berlin University of the Arts.

Stelzmann is also a very typical example of the German expressionistic movement, but of course he is younger than Max Beckmann or Otto Dix. In fact he is one of my “young artists” – he is only 72 now – and he still paints with extreme quality and technique. 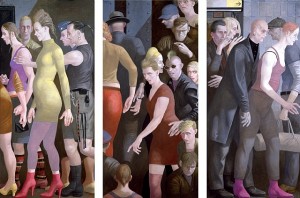 Stelzmann is a very traditional painter and what he does in his paintings is he paints the German society. He paints you and me. He is like a mirror of what we are in our country. People look at his paintings and they are sometimes shocked by his straight-forwardness, by the themes, by what they see, but in reality all they have to do is step into the underground railway (metro or subway), into a bus in Frankfurt or in Berlin and, if they are willing to open their eyes, they would see these very same people. Stelzmann is a mirror of our society.