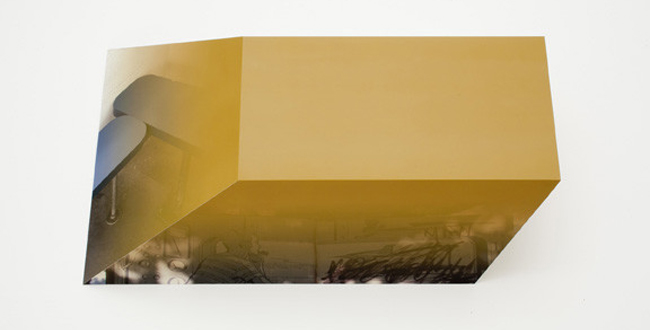 Brandon Lattu’s fourth exhibition with the gallery is a combination of two video installations, and a series of three-dimensional painted photographs, each created by removing the human factor from the process of selecting the building blocks of the narrative and allowing a proprietary computer algorithm to make those decisions. We especially liked the second half of the installation as it seemed to engage many senses at once and produced a lateral discovery effect. 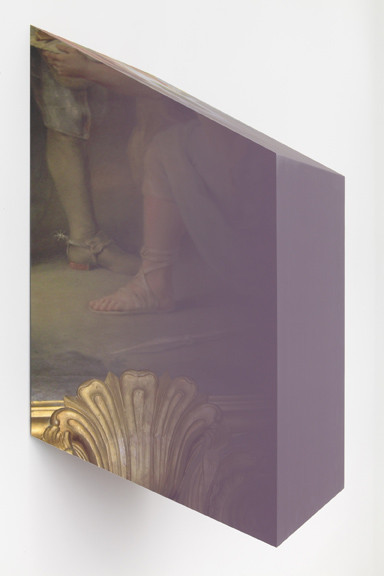 Lattu seamlessly combines three principal art forms – painting, photography and sculpture – into a single dynamic and thought-provoking object. These are photographs printed on three-dimensional geometric forms (models) of various shapes, sizes and torques that are then semi-obscured by opaque paint. You are first drawn in by a lushly opaque, saturated and uninterrupted field of pigment protruding from the wall. Its unexpected angular shape, its direction, and its size present themselves first. An elegant introduction, if you will, and as your mind processes all of these elements you slowly move to the next step and begin to analyze the image that gradually appears from behind the paint as the veil of pigment recedes away from the face of the work. The images itself is almost inconsequential – it can be anything, as it actually is, unhinged from the context of the rest of its elements.

The sophistication and principal achievement of these works is the harmonious integration of simple elements traditionally associated with art – color and form, within a new paradigm of the creative process where an external, non-human entity is charged with making mathematical (read, non-intuitive) decisions and applying them within a creative (read, intuitive) format.

An encounter with the second body of work on view, “Selected Compositions”, begins in the center gallery and coils into the east gallery. Further developing his “Random Composition” series from 2010, Lattu brings together four separate images from his archives to serve as the material (and conceptual) support for the monochromatic ‘face’ of a geometric sculptural volume that protrudes from the wall. The single color covering the face spills over each edge and fades onto the discrete depictive images that occupy each side, partially obscuring content. This obfuscation at once invites more detailed inspection and acknowledges a co-constructive relationship between pure image and pure color. While these works, like the slide presentations, adhere to a general format, each “Selected Composition” is unique in that it differs in shape, size, image and color according to the artist’s chosen preferences.