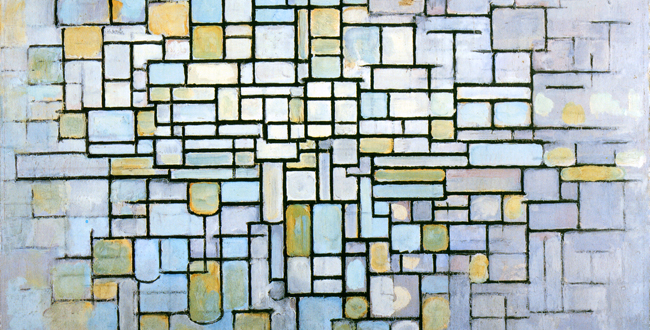 “For when I construct lines and colour combinations on a flat surface, it is with the aim of portraying ‘universally beauty’ as consciously as possible.”

Piet Mondrian – The Road to Abstraction opens in Moscow

At the opening reception the Russian Minister of Culture Vladimir Medinsky called the exhibition the “first major retrospective of Mondrian’s work in Russia”. Housed on two levels, with the traditional Dutch landscapes on the main floor and the signature Mondrian abstractions on the lower level, (a rather strange organizational decision) they appear to be painted by two different artists. One a traditionalist, the other a rigid abstractionist. The retrospective, as such, is a joint effort by the Hague Municipal Museum, holder of the largest collection of works by Piet Mondrian (some 300 works) and Tretyakov State Gallery, Russia’s preeminent museum of Russian Classicism and Avant-garde art. In all 37 masterpieces traveled to Moscow for the exhibition intended to reflect the painter’s creative journey that brought him from figurative imagery to absolute abstraction.

Largely self-taught, and taking lessons from his father and uncle, he began with realism, polishing his skills painting the familiar Dutch landscapes in the classic style of the Hague School. 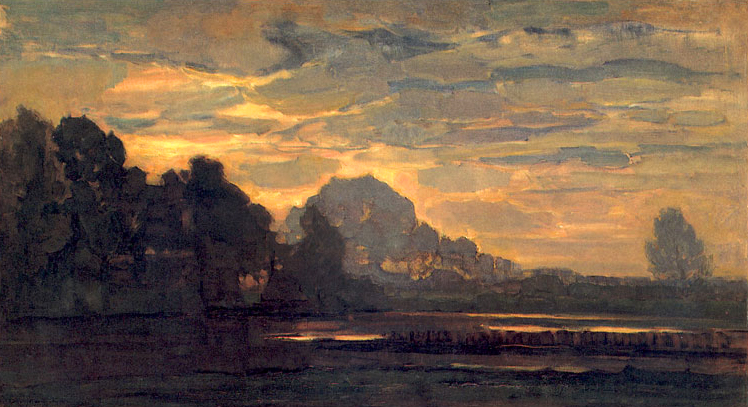 In 1909 Mondrian joined Helena Blavatsky‘s famed Theosophical Society an organization that focused on the “study of comparative religion, philosophy, and science”. Subsequently many of his abstract works were greatly influenced by his interest in the theosophical doctrine that stated that the universal harmony has a balance between “the vertical” and “the horizontal”. This search for balance became for Mondrian a universal law of life. He wrote:

By 1914 Mondrian completely departed from figurative and representational work and in 1917 “Neoplasticism” was born. This particular style of painting consisted largely of grids on canvas with cells filled with solid colors. The style that will come to define his later work and ultimately his contribution to non-representational art.

Works in the Tretyakov exhibition 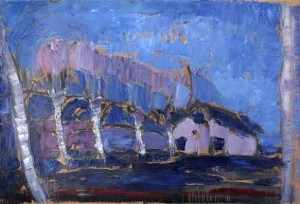 Mondrian’s miniature vignettes of rural life, installed at the start of the show, are quaint observations painted in a traditional palette of burned siennas, soft browns, olives, grays and blacks. His fluid lines and soft watery colors give no indication of the radical changes to come. The first time we begin to see the shift towards an expressed geometry is in the Evening Landscape III, 1911 (left). The painting has strong vertical elements in the form of angled white birch trees balanced by a pronounced horizontal line. You will notice that the colors Mondrian picked for this composition are far from the soothing earth tones seen earlier. If you look closer still, you’ll see that most of the elements are painted with a palette knife and not a brush, allowing for wide swaths of color, like open emotions with less shading and more expression. 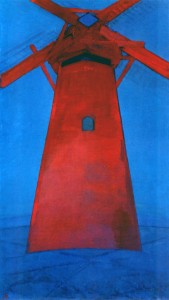 Portrait of a Girl, 1908 is the first painting in the exhibition with a beautiful lake of red. It seems here Mondrian first discovered the color that will will feature so prominently in his later works. It’s uniquely flat and has almost no perspective. The girl, seated enface, appears at the same distance across all points and the longer you look at her the less pleasing her features become. But what makes this work interesting is that Mondrian painted her using short Impressionistic brushstrokes, placing contrasting colors next to each other.

Here too is the famous Red Mill that marks the end of the clear figurative forms in Mondrian’s painting. Bold reds and blues, clearly defined vertical and horizontal elements and of course Mondrian’s new signature – PM. The red of the windmill on the original painting appears duller than expected and takes second stage to the saturated horizontal fields of blues: darker on the bottom and lighter on top. 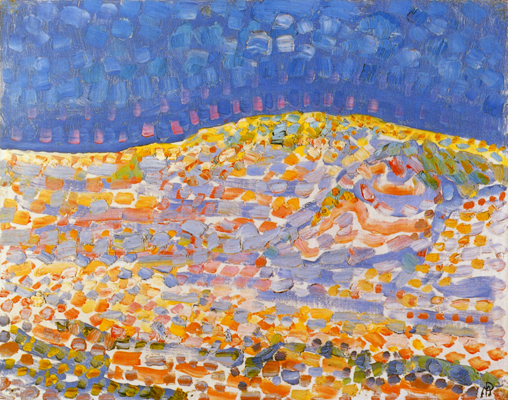 Nineteen hundred and nine is the year Mondrian painted small scale landscapes in a pointillist style. Sea After the Sunset, Dune II and Dune III (above) are panted with abrupt, unblended brush marks applied in contrast to the layers below: lavender on yellow, pink on turquoise, blue on green. A beautiful autumnal Church in Domburg with Tree is another not to be missed beautiful small canvas in pointillist style. 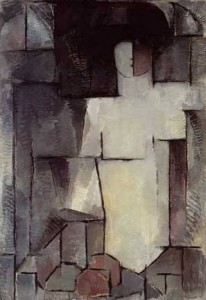 His cubist works, like the 1912 The Large Nude (left) are far less dynamic and despite their intentions fail to create a sufficient energy that define his other works. The only other cubist painting Portrait of a Lady, 1912 is a much better example of Mondrian’s attempt at the technique. Installed opposite the Nude it is probably best viewed from an angle and somewhat of a distance.

Neoplasticism and the Reduction of Form

“Only now ( in 1943) I become conscious that my work in black, white and little color planes has been merely ‘drawing’ in oil color. In drawing, the lines are the principal means of expressions; […] In painting, however, the lines are absorbed by the color planes; but the limitations of the planes show themselves as lines and conserve their great value.” – Piet Mondrian* 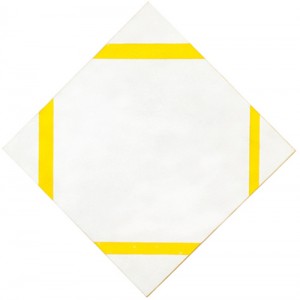 The exhibition culminates with Mondrian’s 4 signature grid compositions. Composition with Large Red Plane, Yellow, Black and Blue, 1921 where the white shifts slightly towards a cool blue and the black grid stops short of reaching the edges of the canvas. The white and yellow Composition with Four Yellow Lines, 1933, the largely monochromatic Composition with Lines and Colour III, 1937 and the Composition in Red, Black, Blue, Yellow and Gray, 1921.

As you can see the basic structure of the compositions gradually took on a more prominent role. The accent shifted to the background while white became the dominant colour in Mondrian’s successive works. Mondrian wrote about his philosophy: “As you can see this is a composition of vertical and horizontal lines which will (in an abstract manner) have to express the idea of rising upwards, of magnitude. This is the same idea which used, for example, to be the guiding principle in the construction of cathedrals.”**