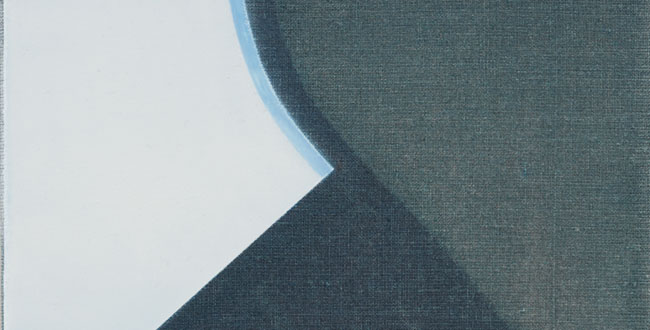 There are paintings that confront you with a strong statement as soon as you enter the space – works by Kusama, Richter, Sherman, or  Basquiat are bold, loud statements that demand the viewer’s immediate and all-encompassing attention. And then there are works that draw you in with their understated and layered complexity that requires careful consideration and concentration. Svenja Deininger‘s work falls solidly into the second category. 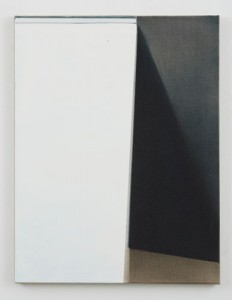 Her disciplined palette is permutated throughout the exhibition at the Marianne Boesky gallery in Chelsea where the artist is having her first solo exhibition. The semi-translucent whites, subtle blues, cool greens and grays flow and slide along crisp boundaries, sometimes apparent, sometimes hidden. A seemingly all-white painting soon reveals itself to have a multi-planed surface with carefully defined fields that are not pre-determined but are arrived at organically. The longer you interact with the painting the more it reveals. Lines and ridges appear creating new angles, paths and connections where none existed moments ago. Pictorial elements realign with each new discovery, waxing and waning in significance as the kaleidoscope of Deininger’s curves, lines and fields continues to shift. Viewed from a short distance, a unique motion pattern becomes apparent within each painting – a pattern determined by the spacial relationship between the primary pictorial elements. 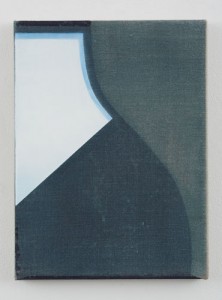 That said, there seems to be no compositional pre-detemination in any of the works besides the elementary structure. The rest is clearly built up as the artist considers each successive layer and its relationship to the pre-existing compositional elements and of course the canvas itself. Like a considerate and attentive storyteller, Svenja Deininger often leaves a portion of the canvas bare of paint. Whether a strip along the margins, or a bolder field of raw canvas, these “omissions” read rather like windows into the origins of the work. The technique leads the viewer to reverse the artist’s natural process and approach the painting from the point of completion re-tracing the steps, layer after layer to arrive at the point of origin.

In Svenja Deininger’s works, white is never just white. Instead layers of different densities (transparent, semi-translucent and opaque) make up the final vision where the monochromatic grays, quieted greens, waxed whites and subdued blues read like a richly imbued nordic landscape that fools with its chromatic monotony only to reveal itself later. 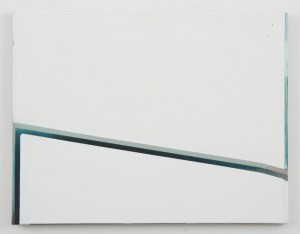 Deininger’s paintings will resonate even louder with those familiar with the work of Philip Glass, the prolific contemporary American composer, whose single notes often stretch for extended periods of time, allowing the listener to focus on the structural elements of the sound and create unique personal associations. In fact each time I’ve looked at one of the paintings from the exhibition, I’ve experienced just that –  a single note vibrating at its own unique frequency that seems to align itself with the painting.

The exhibition is on view at the Marianne Boesky Gallery until February 16, 2013.