Brigitte Waldach retells the story in her own words

Morten Korsgaard, partner at Galerie Bo Bjeggaard talks about the work of Brigitte Waldach, a contemporary German artist, represented by the gallery for the last several years. Brigitte’s work draws on literary and political sources and often deals with personal interpretations of historical events that affected the German society in the last several decades. Brigitte masterfully manipulates pictorial space through alternating negative and positive planes within her work. 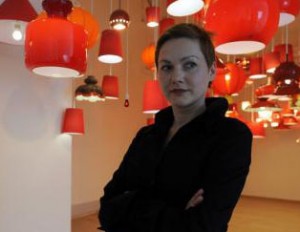 Brigitte Waldach is a German artist, based in Berlin. She [studied under] Georg Baselitz, whom we also represent in the gallery. Originally she studied literature in Berlin, but then later on went to the art academy and was Baselitz’s master student and we’ve been working with her for the last five years. I met her in Cologne and it’s very seldom that I walk into a fair and I see something that really attracts me… Working in the art business for 25 years, it’s so rare that I see something so special that I have to stop, but that’s exactly what happened with Brigitte. 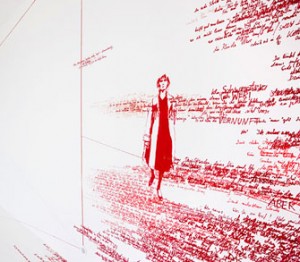 People in this drawing are actually known people from a terrorist group. The Rote Armee Fraktion “RAF” had a star as their symbol, which they used in their fight against the authorities, the government and the whole system. You can see that the text is in different colors. There were two sisters in the Rote Armee Fraktion, and one of them worked in a German newspaper back in the 70’s. They corresponded through letters and the lighter red color, used in this drawing is used to identify the letters written by the sister outside the prison. The words in a darker red were from the letters written by the sister in prison. However, since the authorities controlled everything, so she couldn’t write whatever she wanted, so they used different literary works as code to get information to each other. This is what Brigitte is trying to communicate in this drawing.