A week or so back an article caught my attention. The author talked about the Whitney Museum that will soon relocate to the Renzo Piano designed location in the Meatpacking district while The Met will take over the 75th street location for its Modern and Post War exhibitions. The article featured a partially finished facade of the new building — construction cranes puncturing its facade of disjointed rectangular sections stacked one on top the other. Conceptually and formally disconnected, but for the structural beams stitching them together, it could have been anything and anywhere: a bank, a condo, a hospital (Weill-Cornell Medical Center on the Upper East side has a more interesting building that this one), a car park, or even a university research lab transported from Kansas City, San Jose, Stamford or Austin. Really, if the museum board wanted shipping containers perhaps they should have placed them at the piers. Because this building that is supposed to house an iconic NY institution visually has nothing to do with its city. 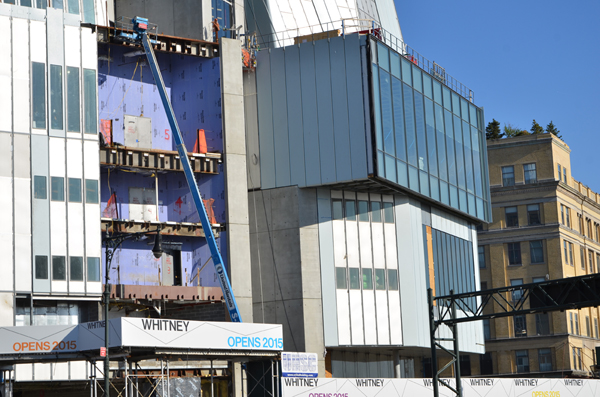 The Whitney Museum’s new building in the Meatpacking District, view from the West Hide Highway.
Photograph by Kristina Nazarevskaia

I remember thinking that it looked like any of the faceless new condos several blocks north in Chelsea – an area whose architecture has come to reflect its new identity. And so I thought about the connection of art and architecture, about museums and how they influence our perception of art. The way a Modernist painting is perceived and interpreted at the Met vs. inside a modern construction. But also how these new uninspired readymade buildings inspire production and accumulation of likewise art. The Jeff Koonses, Iza Genzkens, Richard Princes, Mike Kellys, etc. of the art world would most certainly find their place in these buildings, but would more traditional works? What kind of art can we expect to see in this horrendous structure that already, without even being completed, looks like it’s in progressive stages of decay? 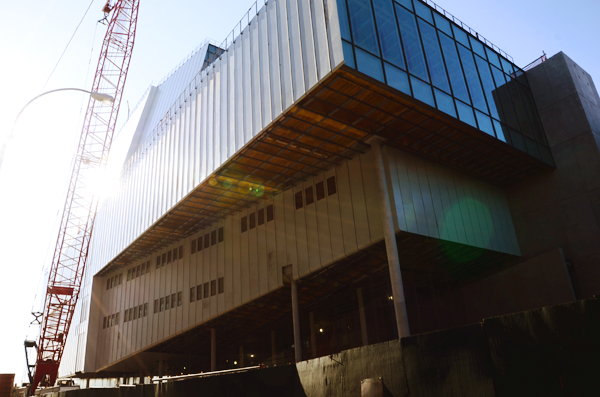 The Whitney museum, view from Hudson and Gansevoort streets. Photograph by Kristina Nazarevskaia

The hope, of course, is that the museum, in its new Gap-Banana-Republic-inspired iteration, will continue to mount exhibitions that are accessible, important and interesting to those who seek something more substantial than, well a single light bulb in a white room, or a shiny reproduction of a child’s toy. Something without an immediate expiration date. 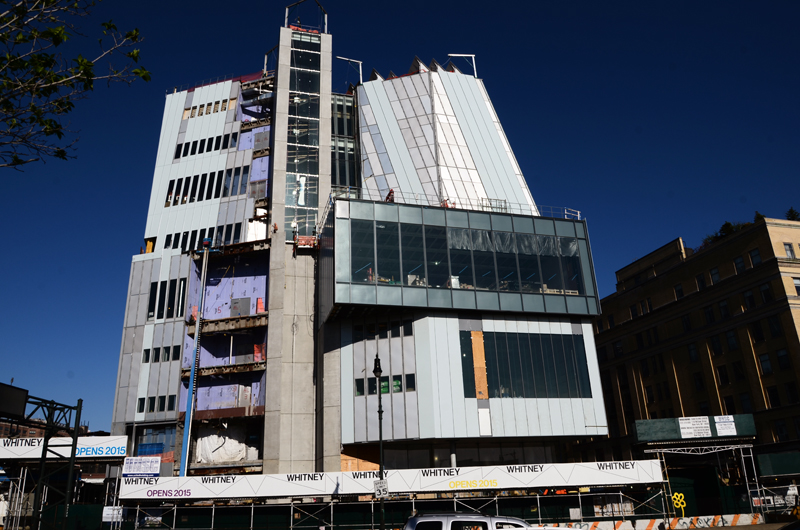 The Whitney Museum, view from the West Side Highway. Photograph by Kristina Nazarevskaia

It’s not about rejecting new ideas, it’s about not settling for the lazy bad new design ideas in a city that really deserves better efforts for its cultural gems. It’s about understanding the importance of creating an environment that inspires the artists and the audiences to start a conversation. The new Whitney building does neither. As it stands now, the only contribution is another awkward eyesore in a neighborhood that is being stifled with them.

Perhaps boards at other museums should look at the city first, feel its soul, feel the connection between the new structure and art they want to show in it, and commission buildings that will compliment the neighborhood and at the same time inspire generations of great art to come.