German artist Thomas Ruff creates something out of nothing

We first discovered photographs some two years ago when we interviewed Adam Fuss about his captivating and monumental images created using biological objects. We then met Alison Rossiter at AIPAD and talked to her about her monochromatic color fields inspired by Richard Serra‘s exhibition at the Met. 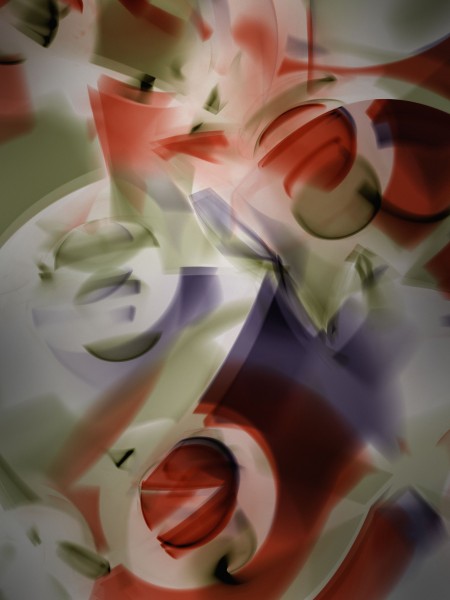 This year during The Armory Show we were introduced to the work of a German artist who has chosen photograms as his latest means of artistic communication. In a series of works started in 2012 Thomas Ruff essentially takes an idea that was first introduced my artists like Man Ray, Laszlo Moholy-Nagy who simply placed objects of various shapes, textures and opacities onto photographic paper and captured their physical qualities through the optical traces they left on the light sensitive surface of the paper. But what those artists managed to achieve through light and the chemical processes in the 1920’s, Ruff creates using all-digital means. So, what you see actually doesn’t exist.

As Veronique Ansorge, Associate Director at David Zwirner Gallery (New York / London) explained, Ruff creates these shapes and lines in his computer, digitally manipulating color and light to create his large scale abstract compositions. They are much more elementally complex and abstract than any of Man Ray’s rayographs where we can recognize many of the employed objects.

Veronique Ansorge: Thomas Ruff is a student of Bernd Becher and always interested in exploring the quality of a digital image. In this new series he works on the idea of photograms which were played around with by artists such as Man Ray, Moholy-Nagy. So what he does here is use this idea and basically reinterpret it in a digital rendering. There is no original image to this work or space, but it’s rather a composition in a virtual space. The effect of that is that he is actually able to rotate the objects in that space and he adds color afterwards. It’s an ongoing project and these are the latest works from the series. We had a big show of his in a beginning of 2013 at David Zwirner gallery on 19th street and this is a continuation of it.

Thomas Ruff was born in 1958 in Zell am Harmersbach, Germany. He attended the Kunstakademie Düsseldorf from 1977 to 1985. Fellow students included the photographers Andreas Gursky, Candida Höfer, and Thomas Struth. You can read Thomas Ruff’s full bio here.