Anyone who has ever seen Franz Kline‘s expressionistic black slashes of pigment on a white background will instantly draw connections between those famous compositions and color choices of this Burundi-born artist. But that’s where the similarities end. Serge Alain Nitegeka, an artist represented in New York by Marianne Bosky Gallery bases his paintings on the installations that precede them. Each a snapshot of a specific place within the site-specific construction. The installation at the Armory Show featured the artist’s signature black beams, unpainted shipping crates and Mondrian-like red squares and rectangles that snap the viewer out of the monochromatic trans. As Nitegeka explained in the interview, the work — a labyrinth of strict lines, spontaneous in construction, is only complete when interacted with by the audience. It demands an unconformable passage, drawing physical and emotional parallels between migration experiences of victims of illegal human trafficking in Africa and around the world. 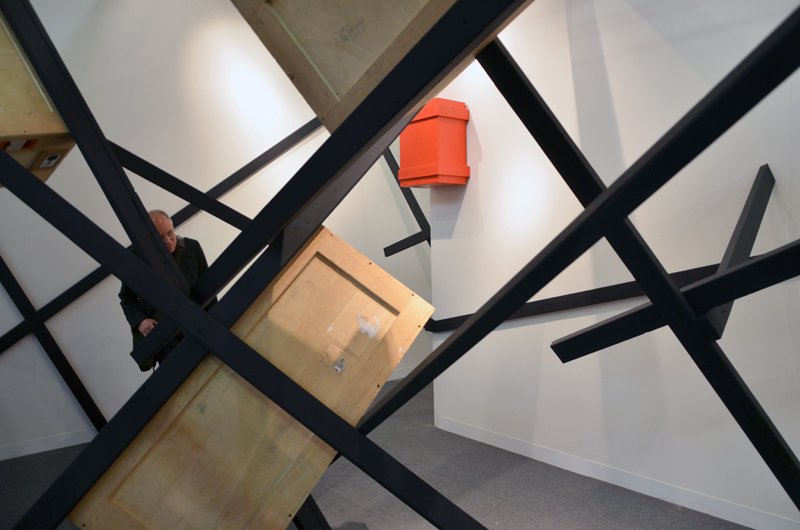 Serge Alain Nitegeka: Second-hand crates have a history of moving things across borders. Essentially, when I started working I was drawing myself in the nude on the sides of the crates. That translated to dealing with narratives of human trafficking. I found the crates to be very convenient to use … it allowed me to explore illegitimate travel of people from A to B. I was able to talk about slavery, I was able to talk about human trafficking, to talk about the illegitimate travel across borders, and that’s where the crates came in.

I thought of the idea of starting to use materials and sculpture that explore a narrative that would be inclusive of the viewer’s experience. And I ended up developing an idea of the sculpture that would have to be fulfilled or completed by the viewer. The viewer has to be IN THE space, the viewer has to interact, the viewer has to negotiate their way. The viewer has to feel like they are made to move in a particular way, essentially fulfilling, or talking about forced migration. I make an installation from a site-specific point of view. It’s a one off and it’s adapted to the space. Refugees and asylum seekers – they have to improvise, they have to find means and things in the environment they can use that will enable them to do what they want or what they have to do to survive.

I’m very interested in geometry – the idea that lines have to add up, they have to make sense. How can the space inform the lines that I am going to take.. .The way I work with installation…as a kind of self-generated sculpture in a sense that one line informs the other. Coupled with the fact that it has to be structurally safe, so there has to be some structural decisions that are being made when, for example one piece has to be added on or the first piece has to be supported. So that carries on until something emerges. When I start working, I have no idea how it’s gonna look like, I don’t have a sketch. I just have the materials, I have the space and that’s kind of how I work…

This article and video © galleryIntell.