“… one sunny day the light was raking across the windows of the neighbors’ and it hit every particle of dirt and dust on the glass, thereby diffusing the scene behind it into, almost, a painterly scene…” — Arne Svenson

Besides never sleeping, New York City also never stops growing and expanding. The familiar orange construction netting, with carefully rounded perforation squares, seems to float through the various neighborhoods of the city, briefly annunciating an impending birth of a new structure. And then it’s off to another street, another project, another new beginning. But the army of paint-splattered, dust-covered, helmet-shielded workers behind the magically growing glass and concrete structures often remains unseen. Well, they are, of course, the center of many jokes, complaints, stereotypes and soft-drink commercials, but most of us perceive these builders as one with the structures they build. 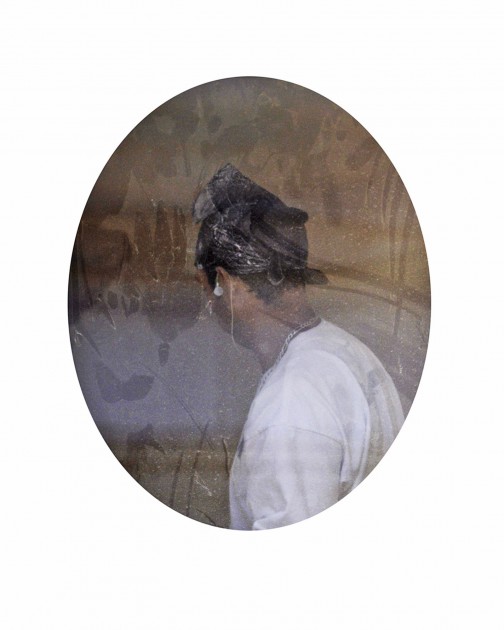 Not so with Arne Svenson, who came to see these men and women in a new light after completing his previous series of photographs ‘The Neighbors’ — an intimate series of partially obscured portraits of wealthy residents going about their lives in a glass building across from the artist.

The absolute transcending beauty of ‘The Workers’  lies in the way Svenson translated the ordinary person inside an ordinary city scene into a jewel-like cameo filled with motion, gesture, light and a mille-feuille of internal narratives. He is, very obviously, not interested in a posed sitter, instead finding beauty in the moments before and after. “I take the photographs and don’t look a them for 3-4 days, allowing the excitement of the moment to die down. Then as I examine each one I have to once again “find” that space and moment within the oval.” And it is these moments that allow the viewer to construct his/her own dynamic narratives. In fact, the viewer is expected to make as much effort in interacting and establishing a personal bond with the photograph as Svenson made in creating it. And that’s fair. “I start the sentence; I give you a paragraph, but you must finish it,” says the artist.

On a personal note, I found it interesting that in an earlier interview, Svenson referred to himself as someone who immigrated to NYC from California. A term rarely used when describing movement within he same country, intentional and final as it may be. “I was done with California. I left with no intention of coming back” he clarified when I mentioned the article just before we started taping. And so I find this connection particularly fascinating, since most people who traditionally come to build our cities, and in all probability subjects of his photographs, are themselves immigrants.

For this interview Arne and I met at his exhibition at Julie Saul Gallery in Chelsea and talked about some of the important visual and conceptual aspects of this series, as well as the connections between his portraits and some of the well-known examples from the centuries past. Here is the first part of our interview.

The palette, gestures, composition and of course, the oval that holds your subjects in ‘The Workers’ all point to the influence of the great European portraiture tradition. Are these references intentional? 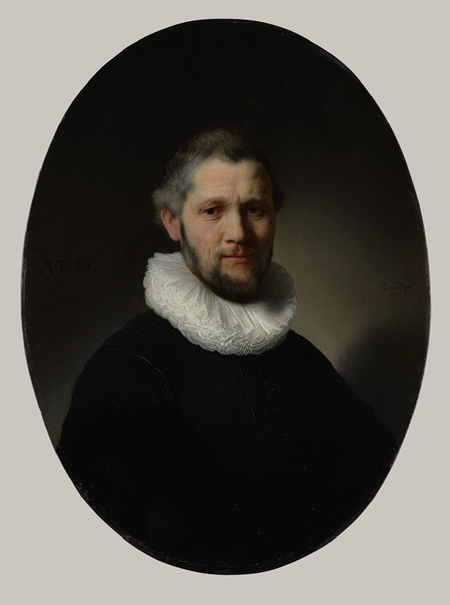 Rembrandt van Rijn, Portrait of a Man, 1632, at The Metropolitan Museum of Art

So, when I started this new series, ‘The Workers’, I used that knowledge of not only critical analysis of my own work by others, but I used my trips to The Met. And one thing I did see immediately with this new work, with ‘The Workers’, was that I had to use an oval and it was a very tough decision to make because it’s an extraordinary statement – an oval. It has a lot of connotation. And part of the motivation behind this particular series was that I wanted to illustrate and show us the people that build the palaces for ‘The Neighbors’. So, I started looking in neighboring buildings, and buildings up and down the street and out of the neighborhood, and looking through glass and seeing workers and as I saw them, it came to me that it was a noble profession and how is nobility shown in many-many paintings and through history? It is through the oval. So, I turned the tables, in a way so that ‘The Neighbors’, the wealthy inhabitants of New York City were relegated to these harsh and geometric containers, and ‘The Workers’ were awarded the oval.

While many would consider dust and dirt hindrances to the integrity of the final image, you use them to your benefit. Tell me how these elements became integral parts of ‘The Neighbors’ and ‘The Workers’?

When I started ‘The Neighbors’ series I had a large lens and was looking through to the neighbors’ windows and I photographed the action, or the lack of action. And I kept analyzing, why could this not be successful – it’s a beautiful vignette, it’s beautifully lit… And I realized that there was no indication that I was shooting through a window. Then one sunny day the light was raking across the windows of the neighbors’ and it hit every particle of dirt and dust on the glass, thereby diffusing the scene behind it into, almost, a painterly scene. It broke up the surface and I realized that if I broke up, if I focused on the dirt then this would be the secret that I was looking for. This would also be a way of flattening the planes. I didn’t want dimension. I wanted it to appear that all this action was projected on a ¼” plane of some sort.

The long lens helped with that because that kind of foreshortens and then focusing on the glass further reduced the depth of the action, so it appeared as if it was happening as though it was imbued in the glass. To me it was like photographing stained glass. It was almost that…. I shudder to say a religious experience, but it was an experience that gave everybody, and especially The Workers’ – all my subjects grandeur and respect, I think is the term I am looking for because it suddenly became bigger than a photo.

This video and transcript © galleryIntell. Artwork © Arne Svenson and courtesy of the artist and Julie Saul Gallery.