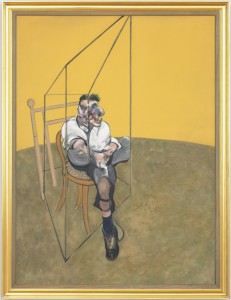 In November, the mystery began with a telephone bidder calling in and winning the bidding war for the Francis Bacon’s Three Studies of Lucian Freud triptych at Christie’s New York. At first William Acquavella was reported to have placed the wining bid on behalf of  Sheikha Mayassa of Qatar, reportedly adding new works to the museum in Doha. Yes, this made an appearance in our Top Art Stories for that week too. However, multiple news sources are now naming the real bidder of this purchase as Elaine Wynn, the billionaire co-founder of the Wynn Casino Empire! Bacon has always been one of her favorite artists and she anonymously lent the paintings to the Portland Art Museum in Oregon where it is on view until March 30th. Is this the last word in the Bacon buyer saga?  Source: The Daily Mail In other news, Christie’s, the privately owned auction house, announced this week that their November 2013 auctions totaled $17.3 billion thus making them the highest grossing sales of all time. Ever.

First fake, Prada, Vuitton and Chanel bags, now it’s high-priced art. It’s long been the hushed whisper across the art world and now the volume is getting louder: Chinese fakes are flooding the market. As the New York Times reports this week, the Chinese art market has been flooded with forgeries leaving the international Asian auction houses in a frail state. Artists there are trained to imitate Chinese masters and can mass-produce high quality forgeries including ceramic artifacts. It has become so difficult to pinpoint the difference that many forged items went unnoticed for many years. With the increasing high-profile scandals, the outrageous fakery is now exposed. Even more embarrassing than selling millions of dollars worth of forgeries to bidders… the government decided last July to close a private museum with the suspicion that everything in it (all 40,000 artifacts) were fake! Source: The New York Times

Kanye West calls himself a fine artist. Wait, what?

That’s it, we can all breathe a collective sigh of relief. Kanye West has officially confirmed it. Oh, Kanye… As if being a rapper, songwriter, record producer, one part of a Kim-ye duo, director, fashion designer and a self-proclaimed ‘voice of a generation’ wasn’t enough, Kanye West, hold on to your gold chains, has also declared himself a ‘fine artist’. In a recent interview with Steve McQueen, the director of “12 Years a Slave”, 36-year-old West called himself a trained fine artist who has gone to art school and was a ‘child prodigy out of Chicago’, We wonder what the American Academy of Art has to say on this topic (since this is where he studied). Hey, if George W. Bush can call himself an artist…  Source: Interview Magazine

Millions of dollars worth of art was left to the Whitney Museum after Robert W. Wilson‘s wishes were read in his will and filed in the New York state Surrogate’s Court. The size of the collection is still unknown, but it did exclude one painting by James Rosenquist entitled The Meteor Hits the Swimmer’s Pillow. He also left two million dollars to his lucky assistant from Brooklyn.  Lucky. Source: Bloomberg

A new laser technology to look under the surface of artwork

Using a technique that was developed in medicine for imaging cross-sections of human tissues, chemists have now unveiled the same technique to reveal the structure of paint layers. They can identify which pigments were used, where they are, whether a hue was mixed or not and the differences between brushstroke thickness. Visible light pulses out onto the artwork and gives the painting a ‘fingerprint’. These might be the clues to understanding the technique of our classical art masters (even history) just a little bit more. The question now is how many collectors will employ the new tool to authenticate their art works. A better question still, how many museums will do the same and what that means to the authenticity of their collections? Source: Nature

Not the news usually reported in connection with the art market. It seems stress levels are increasing across the industries and people working in this super competitive filed are unable to cope. The British publication Telegraph reported today that a Sotheby’s art expert Sophie Trevelyan Thomas hanged herself this week in London after stresses at the famed auction house became unbearable.  She was only twenty-nine years old and an Old Masters expert. Her depression with her thirtieth birthday only a week away and her unhappy situation at Sotheby’s only escalated her downfall. What does it say about the changing professional landscape of the industry and the unbearable competition in the market? Source: The Telegraph

Image copyright to their respective owners.

The image The Crucifixion by fourteen-century artist Puccio Capanna undergoing non-destructive laser scanning that can reveal the structure and composition of different layers of painting. © Martin Fischer. 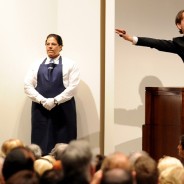