Hollis Taggart Galleries Ξ It would be very difficult to talk about Theodoros Stamos and not recall his non-objective abstractions. Expressive, gestural fields of colors, juxtaposed within the pictorial space are signature Stamos compositions that seem to speak the same language as another famous abstractionist of the time, Clyfford Still, albeit in a calmer tone. His oils on canvas are what he is best known for, so seeing his surrealist work is a rare treat worth a special mention. In our interview with Hollis Taggart, founder and Director of Hollis Taggart Galleries in New York, we talked about Stamos’ surrealist drawings from the 1940’s. In focus were two Untitled watercolor and inks on paper from 1946. 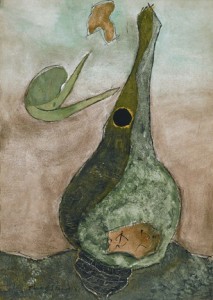 Stamos produced very few works in this genre (automatic drawing is closely associated with Surrealism) and most of these were influenced by an early 20th century American painter Arthur Dove. As Mr. Taggart explains, these early biomorphic works were not representational in a sense that the shapes you see in the compositions were not intended to represent any given object. Just as Arshile Gorky, Stamos used these forms to transition to complete non-objective abstraction.

Theodoros Stamos was only twenty when he received his first solo exhibition in 1943 at the Wakefield Gallery in New York, and by the late 1940s he was an established member of the abstract expressionists. Born in New York in 1922, Stamos was the youngest of the group of American painters later to be known as the Abstract Expressionists. Together with Willem de Kooning, Adolph Gottlieb, Ad Reinhardt, Hedda Sterne, Richard Pousette-Dart, William Baziotes, Jackson Pollock, Clyfford Still, Robert Motherwell, Bradley Walker Tomlin and others they would come to be known as The Irascibles. A name given to them after the group wrote an open letter to the director of the The Metropolitan Museum of Art, protesting the museum’s exhibition American Painting Today 1950. The show, they claimed, focused too much on the conservative art forms and was “hostile to advanced art.” 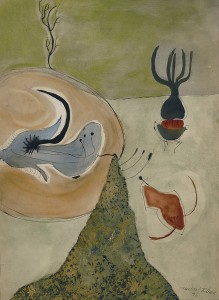 Hollis Taggart: This is Theodoros Stamos, who was the youngest of the so called “Irascible” group, which was the original American Abstract Expressionists. Theodoros Stamos was born and did all of his work in New York when he was in his twenties and thirties. What we have here are two very early examples of his bio-morphic period, which is 1944, the beginning, all the way up to about 1950. These early bio-morphic Abstract Expressionist pieces came out of the Surrealist movement from the thirties in Europe. He was very much influenced by the American artist Arthur Dove. Both of these are examples from that period when he was most influenced by Arthur Dove. So, we have a not-complete abstraction, but an interpretation of nature through a bio-morphic subject matter. They are not meant to be representational in the sense of a sea-shell or an amoeba, but some kind of a pre-historic concept can be found in these bio-morphics from the 1940’s. These are very rare. He only did these for maybe three years, and these are two very top examples. Examples like these you will see in the Metropolitan Museum of Art.