Part II: From Gauguin to Cassatt

In Part I of our selection we covered some of the founders of Impressionism, possibly the best-known and beloved of the “recent” art movements. Its members, artists like Claude Monet, Edgar Degas, Camille Pissarro, Vincent van Gogh, and Auguste Renoir are the undisputed masters who revolutionized what people would call art and thus changed the very purpose of art.

They made us re-assess how everyday objects and places would be presented and perceived from then on. Be it through sculpture, painting or drawing, the Impressionists laid the groundwork for all the major 20th century art movements and influenced generations of artists like Kandinsky, Malevich, Picasso, Matisse, Derain, Twombly, Rothko, Pollock, Frankenthaler, and many, many others.

Edouard Manet (born January 23, 1832, Paris – died April 30, 1883 – Paris) was the eldest son of an official in the French Ministry of Justice. Manet had early hopes of becoming a naval officer. After twice failing the training school’s entrance exam, the young Manet instead went to Paris to pursue a career in the arts (well, because, of course). There he studied with Thomas Couture and like many other young artists do to this day, diligently copied works at the Musée du Louvre. He went on to paint some of the most scandalous paintings of the time. 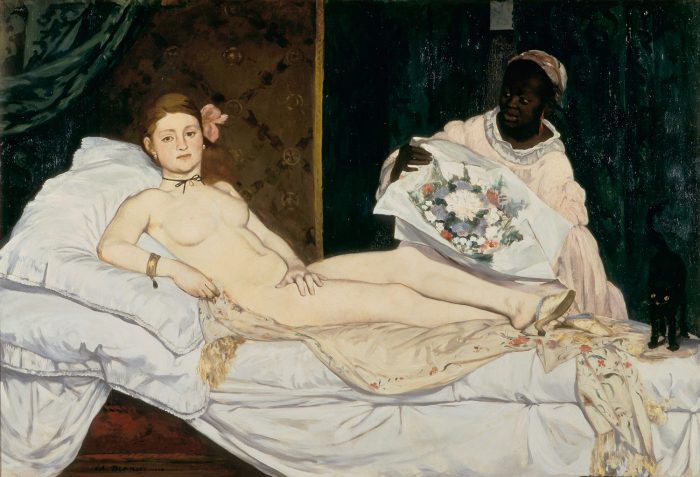 Edouard Manet, ‘Olympia’, 1863. Oil on canvas. In the collection of The Musee d’Orsay

In 1865 he shocked the public with his Olympia. Her deliberately yellow skin tone and the fact that a Manet painted a prostitute who had the audacity to stare at the viewer didn’t sit well with the well-coiffed spectators. “… a goddess was perfectly acceptable, but a contemporary prostitute awaiting her client was not.”* He started another scandal with his Luncheon on the Grass (Déjeuner sur l’herbs).

Manet is considered one of the most important painters who bridged Realism and Impressionism and pushed the boundaries of acceptable in art.