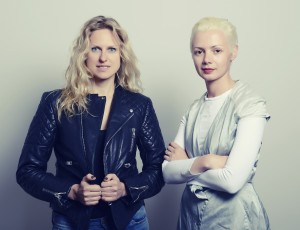 As part of a unique content partnership with VIENNAFAIR The New Contemporary, Kristina Nazarevskaia, Chief Editor of galleryIntell interviewed Vita Zaman, the Co-Director of the fair. Since their appointment in 2012, the two directors, Vita Zaman (left) and Christina Steinbrecher-Pfandt (right), have been reinventing the concept of the nine-year-old art fair and redefining its parameters and programming. The dynamic duo brings to the fair extensive background and experience in top-level global art venues including working Pace Gallery in New York and performing key curatorial tasks at the 2012 Moscow Biennale.

Part of the fair’s ever-evolving conceptual programming this year are 16 Special Projects that include:

Kristina Nazarevskaia: We are at the 2013 VIENNAFAIR talking to Vita Zaman, the Co-Director of the art fair. We talked about VIENNAFAIR as being the platform for innovation. If you were to describe to me how you describe innovation in the arts and how you see the art fair developing in the next five to seven years?

Vita Zaman: our aim is to make the fair smaller, better, so better quality galleries and actually, more of a boutique fair.

KN: There seems to be a heavy focus on the eastern European galleries and eastern galleries. Tell me a little more about that.

VZ: VIENNAFAIR has always focused on Central and Eastern Europe and now we are expanding the focus. We are also including north-eastern Europe like Poland and the Baltics, as well as looking further east. The eastern region, however you define it is very, very interesting and the kind of art being made there is radically different and has something very specific. We believe in presenting cutting edge galleries and the best galleries from those regions and also educating collectors.

Vienna POP and The School of Happiness

VZ: There is a generation of artists who are dealing with less political themes, but more subjective themes of perception. How do we address reality, or how do we address each other differently in order to experience a more meaningful life, in order to be happier, in order to contribute more to society? So, this idea of happiness and connectivity was very important for us conceptually. So we invited this unusual constellation of people with an intention of talking to each other and engaging the general audience. We wanted to escape insular, normalized discourse and we wanted to open up to unusual constellations and unusual connections.

We cherry-picked the best galleries from each country and brought them together, so it’s not just about buying art – it’s about being a part of something.

This interview © galleryIntell and was created as part of a creative partnership with VIENNAFAIR 2013.