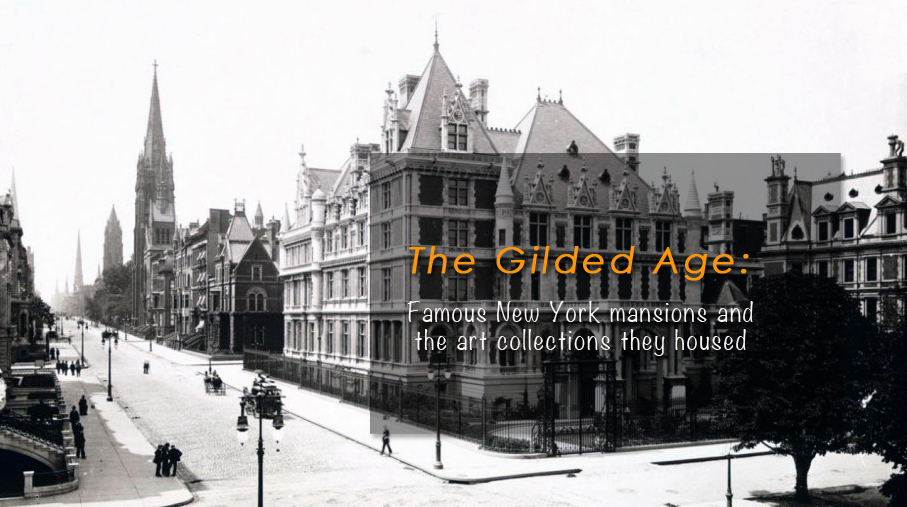 “I want to dominate the Plaza!” – Cornelius Vanderbilt

If the address seems familiar it’s because it is the current home of the Bergdorf Goodman department store. Designed by George B. Post, the Vanderbilt Mansion, as it was known, preceded the current structure on the corner of Fifth Avenue and 57th street. The Vanderbilts threw lavish balls that attracted every member of “The 400” – the elite social circle of New York’s Gilded Age.

There are remnants of some of the Vanderbilt treasures in Manhattan, but not in the most logical places. For example, the famous Augustus Saint-Gaudens mantlepiece representing Peace and Love (Pax and Amor) can be found at The Metropolitan Museum in NYC, the well-known Moorish smoking room is mostly dismantled and split between several locations in Syracuse, and the Midland Theatre in Kansas City. The wrought iron gates that once guarded the Vanderbilt townhouse mark the entrance to the Conservatory Garden at 105th street and 5th Ave in Manhattan and still possess their original beauty.

The fate of the paintings and sculptures is a bit different from the decorative arts. After Cornelius died and the house was sold in 1926, the art passed from heir to heir and moved between the various Vanderbilt residences. In 1945, the collection was auctioned off at Parke-Bernet, later acquired by Sotheby’s, which is why it is difficult to trace the location of the works and why so few remain in New York. In more contemporary times, Robert Lehman has bought Madrazo’s Masqueraders which now hangs in the Lehman Wing at the Met

The New York Times called him “arguably the greatest collector of early modern art in the 20th century. At a time when bourgeois Paris still embraced the stolid academic work of the official Salon, he was buying paintings by Picasso and Cezanne.” 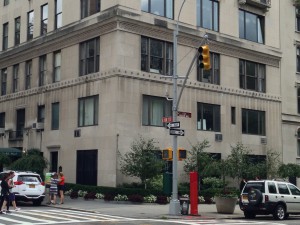 Leo Stein was a known art collector and critic, but history choses its own favorites and now many of us are better acquainted with Leo’s sister Gertrude Stein than the art critic himself. The family: Leo, Michael, his wife Sarah and Gertrude were important patrons of modern art in Paris during the first decades of the twentieth century, collecting and nurturing careers of many artists who would come to become giants of the art world. Among the artists the Steins collected were paintings and prints by Paul Cézanne, Edgar Degas, Paul Gauguin, Henri de Toulouse-Lautrec, Édouard Manet, and Auguste Renoir. But perhaps one of the most famous paintings in the Steins’ collection was Henri Matisse‘s Woman with a Hat that we feature on galleryIntell some time ago.

Alfred H. Barr, the first director of the Museum of Modern Art referred to Leo Stein as ”possibly the most discerning connoisseur of 20th-century painting in the world.” 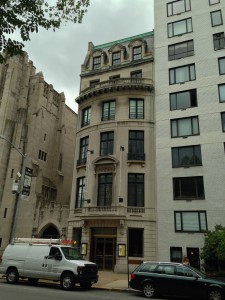 Archer Huntington’s townhouse is the current home of the National Academy Museum located just a stone’s throw from the Guggenheim Museum. This L-shaped mansion has its main entrance on 5th Avenue, but the building wraps around its neighbor to have a second frontage on 89th street. This extension was created to make room for a grand ballroom, which would not have fit on a standard 5th Avenue lot.

With the money he inherited from his father, Collis Potter Huntington – builder of the Central Pacific Railroad and the Newport News Shipbuilding Company, Archer Huntington founded the Hispanic Society of America at 150th Street and Broadway in Harlem. The family’s private life and finances were carefully guarded, and it was only through the Archer’s private diaries and correspondence that his early fascination with the Hispanic world and plans for a “Spanish museum” became known. To his mother, he confided, “The museum must condense the soul of Spain into meanings, through works of the hand and spirit…I wish to know Spain as Spain and so express her—in a museum.”

Huntington used the mansion as his personal museum having selected such well-known works as Francisco de Goya ‘s The Duchess of Alba and Joaquin Sorolla’s 360 degree, site-specific mural Visions of Spain for the collection. One little-known fact about the collection is that Huntington did not purchase any of the artworks in Spain. Having faced harsh criticism for siphoning off their cultural heritage he decided to buy works that had come up for sale outside of Spain only.

Designed by Thomas Hastings of Carrére and Hastings between 1912 and 1914, the Henry Clay Frick House, now the home to the Frick Collection, turned heads the moment Frick bought the property. The lot that lines Fifth Avenue between 70 and 71 streets used to be the home of the Lenox Library – one of the earliest branches of the New York Public Library – which housed the rare book collection of Mr. James Lenox. 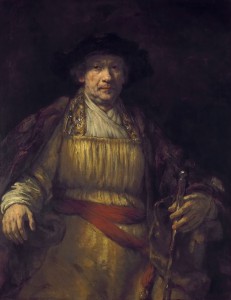 In 1905, Frick moved to New York from Pittsburgh and rented the Vanderbilt Mansion, living with all its artwork. This inspired Frick to compete with the Vanderbilt’s collection by creating his own. He advised Hastings to built his mansion on 70th street with a picture gallery and devise plans to repurpose the house into a museum after his death.