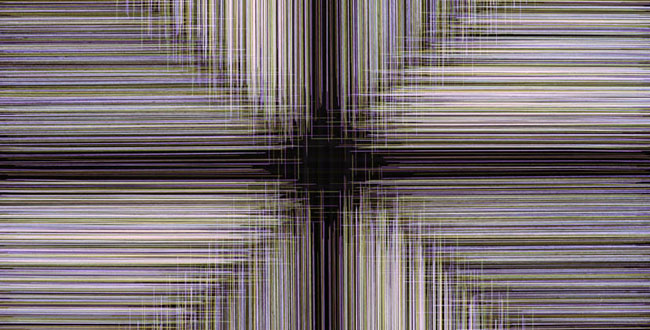 And Time is No Longer an Obstacle – Niko Luoma

What am I looking at? How can you collapse and expand space at the same time? Is it possible? Can objects that exist on a two-dimensional plane move at different speeds in a third? Is the light real or is it a manipulation? Is it a photogram or a photograph? Is it a drawing? Are these needles, strewn or carefully arranged on photographic paper and then exposed to light? What AM I looking at…?

These questions rushed at me, seemingly all at once, demanding definitive or simply plausible answers. It turned out that Niko Luoma, a Finnish Artist with a fantastically quirky Dali-esque mustache, creates these images by using a single streak of light that he then exposes on a single negative. Over 10,000 times. And that’s the point of his work. It’s this process of following a set series of criteria that makes his work almost meditational in its geometric order. Much like a traditional Tibetan or a Himalayan Mandala, where objects are arranged around a single shape or a figure Niko Luoma often structures his compositions around a central point, which in turn creates a self-cancelling illusion of approaching and retreating light, or a void, that pushes the linear elements out while simultaneously pulling them in towards the center. It is this duality that makes the work worthy of examination and contemplation.

The methodical, yet experimental, development of Luoma’s images can be likened to the “New Vision” of the Bauhaus photographers, in particular the photograms by Laszlo Moholy-Nagy and Man Ray. Though Luoma’s approach relies on mathematics, rules and standards, much is left to chance and the possibility of the unexpected.

The exhibition is on view at Bryce Wolkowitz Gallery in New York until February 16, 2013