Rumor has it that speculative “flipping” has brought a new kind of panic to the art market, one that is causing the more savvy collectors to bail out. Experts worry that the resultant art dumping may lead to a burst in the currently robust and long-lived art bubble. 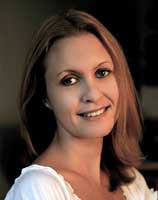 What to look for? Well, the initial signs might look like a crazy lot of market activity; not usually read as a bad thing. However Reuters’ Felix Salmon warns: “If we see another record-breaking season in New York this week, don’t take that as a bullish sign. It could just be that we’re entering a period of feverish selling.” But if Salmon is saying that the sky is falling Kathryn Tully (left), writing for Forbes contends it may have already fallen.

She sees signs that a market decline already hatched. Pointing to what she views as worrisome returns at Frieze and at ArtTactic reports, that show low sales stats in October for the main post-war and contemporary evening auctions at Sotheby’s, Christie’s and Phillips stating: “If recent London sales are anything to go by, the sellers lining up to flip their pricey art works for a profit may have already left it too late.”

Meanwhile in New York fall sales were ostensibly undamped by the dark chorus of art market Cassandras with the New York Times reporting that “fears that the art market was diving into the doldrums were dashed, at least for one night,” as the “sale totaled $290.2 million, almost reaching the high estimate of $308 million.”

So, Mr Salmon, is that bad or good?

Perhaps it helped that Sotheby’s highlighted its November Evening Sale of Impressionist & Modern with a 1935 Picasso portrait of everybody’s favorite muse, Marie-Thérèse Walter, Tete de Femme with an estimate of $20,000,000 – $30,000,000.

Considering the popularity of the Picasso’s vibrant 1930’s paintings, and the love collectors have for Marie-Thérèse, the estimate for the smallish painting, which has not been shown in public since its outing at the Henry Morrison Flagler museum 1981, was safely conservative. It hammered down at close to $40,000,000.

That’s a good, and pretty nearly anticipated result, keeping in mind recent sales of Marie-Thérèse Picassos wherein larger, but less iconic and rather less charming paintings achieved $40+ million. In February, a Marie-Thérèse, Femme Assise Près dune Fenêtre, sold for $44,8 million, and in November of 2012 Nature Morte aux Tulipes, sold for $41,5 in New York. So are the doom-sayers just off? Or, did it help that, hoping for love to win the day, Sotheby’s spun a winning tale of star-crossed love to pitch the work?

“Soon after learning on Christmas Eve of 1934 that Marie-Thérèse was pregnant with his child, Picasso promised to file for a divorce from Olga. His lawyers advised him to separate from his lover during the proceedings, which devastated the artist during this intimate time in their relationship. Soon after painting Tête de Femme on 12 March 1935 – when Marie-Thérèse was just ending her first trimester of pregnancy – he ceased all work on painting for a period of nearly a year. The present work stands as the last major canvas completed before this hiatus, drawing on Renaissance iconography to create a magnificent image of his Madonna.“

While visiting the exhibit at the beginning of the week, we overheard a specialist whispering this legend  into the ears of a close group that was admiring the painting. The story ignores the fact that Picasso began another affair in 1936 with Dora Maar, a young photographer and muse who was documenting the development of Guernica (completed 1937) while Marie-Thérèse grew jealous.

This article ©galleryIntell Photograph of Kathryn Tully courtesy of Forbes.