Christie’s announces this to be the “Season of Picasso”

The art market has, for all intents and purposes, recovered from the recession blues of yesteryear. Next weeks’ Impressionist and Modern Art, and then the Post-War and Contemporary sales at Christie’s and Sotheby’s are expected to bring in $600 million. (This is according to the high estimates set for each lot). The much anticipated fall auction season starts on November 5th and 6th with Christie’s bearing the torch. The day and evening sales will feature an impressive line up featuring a heavy presence by the works of Pablo Picasso and Alberto Giacometti. The total high estimate range for this year clearly exceeds that of last year as the art market is said to be thriving and the auction staff setting, as Joseph Duveen described them “aggressive estimates”. Henri Matisse, Natalia Goncharova, Maurice Vlamnick, Marc Chagall, are among the highlights of the upcoming sales. Source: Art in America 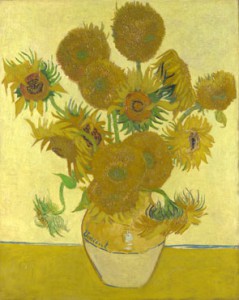 The National Gallery in London will be displaying two out of five surviving versions of Vincent Van Gogh’s “Sunflowers” together next year. One of them will be loaned from the Van Gogh Museum in Amsterdam, whereas the painting featured here was bought by The National Gallery directly from the artist’s family in 1924. Prized for their rarity as well as their infamy, any one of these paintings can easily fetch up to $100 million. It sure would be an amazing experience to be able to compare and contrast these iconic pieces next to each other! Source: The Guardian.

The infamous British graffiti artist, who had all of New York City in a frenzy this last month, does not have many nice things to say about the new World Trade Center building. (Well, neither do we for that matter). In a letter he published on his website, among other things, he referred to it as a “disaster” and an “eyesore”. So vitriolic were his opinions that the New York Times refused to publish his piece in their op-ed column. Image on the left is Banksy’s own mock-up of the NYT page. Read more about this controversy here! Source: New York Magazine.

In other Banksy news, the artist altered an otherwise bland landscape he bought from Housing Works, a local thrift store on 23rd street that works with people with HIV. In an act of Banksy style philanthropy the artist added a Nazi officer sitting with his back to the viewer and his signature. The newly altered, not sure we can say “improved”, painting sold at a charity auction for $615,000 this Thursday! Well done, Banksy! Source: Artsbeat.

Update:  The story didn’t end there and the auction resulted in much controversy when the winning bidder almost immediately defaulted on his bid. More drama followed. Read the NY Times article.

The historically protected power station, featured on the cover of Pink Floyd’s 1977 album “Animals” to be transformed by Frank Gehry

The renown architect will be joining Sir Norman Foster in the next phase of the £8bn Malaysian-backed plan to transform south London’s derelict cathedral of power, the Battersea Power Station into a gleaming wonder-world of 3,500 flats, shops and offices. Frank Gehry will be responsible for five apartment buildings including a centrepiece, named the Flower. Famed for its four brick chimneys, Battersea Power Station was decommissioned in 1983 and has been vacant for the last 30 years. There is no question that this new building will elevate London’s already high position as one of the top architectural attractions in the world! Source: Bloomberg News

Seven epic bronze sculptures by Henry Moore have started a five-city tour of Spain, starting with Santa Cruz de Tenerife, the capital of the Canary Islands. Among them are Reclining Figure, and Mother and Child. Other scheduled tour stops include Seville, Valencia, and Bilbao. The bronze sculptures date from 1960-1992 and were curated by Anita Feldman, head of collections and exhibitions at the Henry Moore Foundation. We hope that Spain appreciates Moore’s art as much as we do! Source: The Art Newspaper