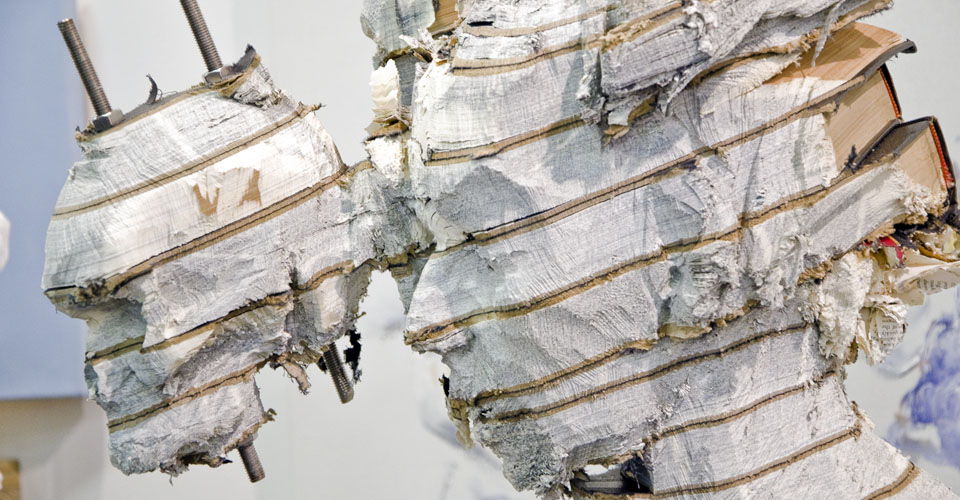 How to ‘carve space’ with obsolete and repurposed objects?

“There are numerous, varied and sometimes conflicting aspects to my work, usually intended but definitely also spontaneously emerging.” – Wim Botha

Some artists spend their careers exploring properties and limitations of a single medium: working all their creative lives exclusively in oil, bronze, or wood; while others prefer to construct a broad narrative and deliver it through an all-inclusive range of materials. Wim Botha, a young South African artist, who represented his country at the 55th Venice Biennale in 2013 is, certainly, the latter. Wim’s grotesque busts, surrealist torsos, spatially complex light processions, and various abstracted shapes catch the uninitiated by surprise, forcefully and monumentally inserting themselves into the viewers’ space: mental and physical. Once you see and engage with a Wim Botha sculpture, you can’t forget the emotional impact it had on you. 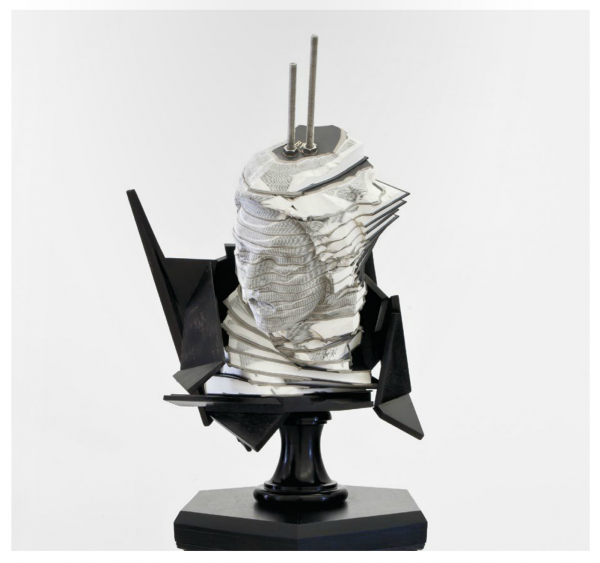 It’s an immersive process, one which takes the viewer through several stages of realization. First comes the recognition of classical Roman sculptural portraiture as the principal influence in Botha’s busts and torsos. Then subtle purpose and intention of the chosen materials reveal themselves much like physical and visual elements in Antony Minghella’s cinematic masterpieces. Each decision in Wim Botha’s work is deeply imbued with purpose. White Carrera marble, one of the most expensive sculptural materials, is carved to reveal typically African features — symbolism most pertinent in a country whose recent history was defined by Apartheid and oppression of its black citizens. Conversely, burned and charred wood is used to portray typically European faces – another commentary on the issues of perception and inequality. 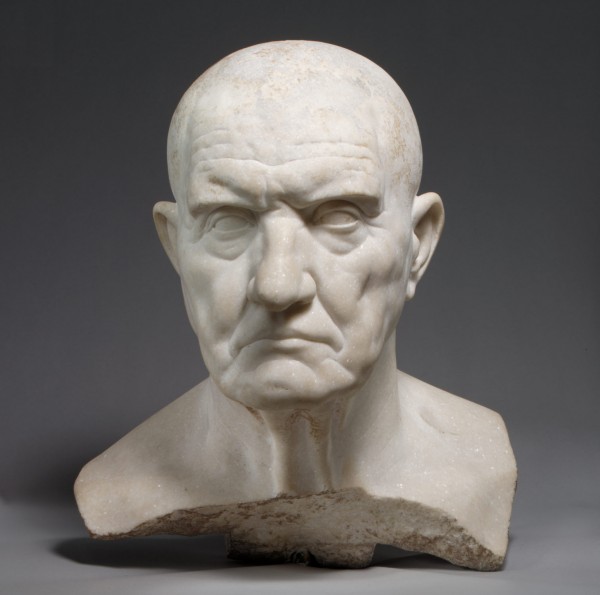 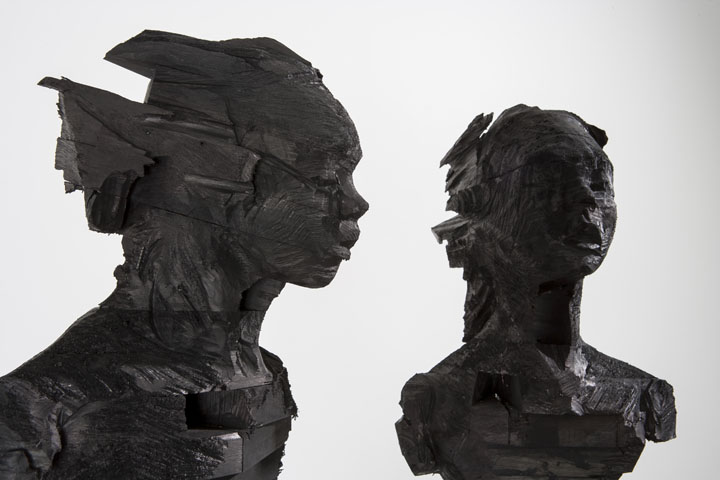 Busts that feature double heads, or heads attached to sculls recall Hamlet’s famous conversation with Yorick’s scull at the start of the play’s third act. 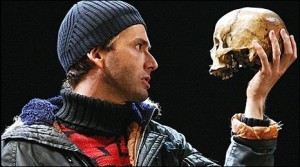 “In my paper works, I carve subjects from stacked or compressed documents containing selected texts with content and meaning significant to the work. By carving a form from these texts, the information it conveys becomes a part of the physical substance of the work and is directly related to the form.” 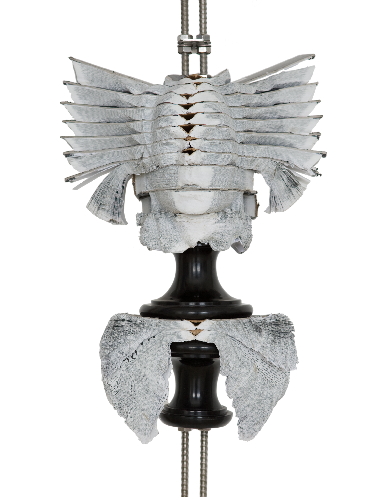 In Wim’s elaborate installations Afrikaans bibles are used to create images from Western culture and history, drawing attention to the invasion of one culture by another and, subsequently, inverting it. White polystyrene busts are cast in bronze, transforming weightless objects into heavy, immovable ones. And then there is the issue of the pedestal. Like Rodin, Boccioni, and Giacometti before him, Wim Botha reinterprets the purpose and perception of the classical support element, adding to its evolution.

“In my work there is seldom a distinction to be drawn between the prominence of the concept and that of the medium. I work with materials central to mass consumerist applications, that are subsequently transformed in essence and meaning to a point at which material and concept becomes integrally interdependent. The works take the form of sculptural installations. I appropriate well-known, sometimes trite and over-saturated subject matter which, coupled with traditional shaping and technological elements, become the nucleus of a series of references around the inherent implication of the subject.” 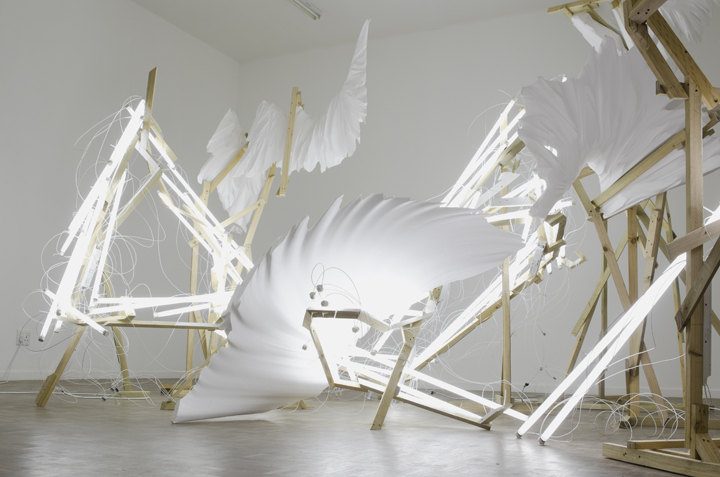 His sculptures are best viewed in the context he creates where each individual object carries equal conceptual weight in relation to the entire composition, as well as the space itself. Abstract paintings and drawings often complete the narrative and should be regarded as part of the statement. 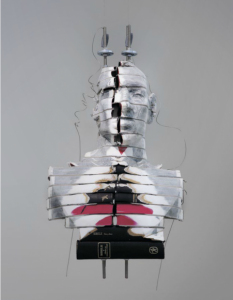 Legato Bereng, Associate Director of STEVENSON Gallery, Capetown and Johannesburg talked to galleryIntell about Wim Botha’s most recent body of work, his reinvention of Michelangelo’s ‘Pieta’, and the philosophy behind the artist’s imagery.

Legato Bereng: It’s kind of a moment of South African intervention of Western history which, essentially, we all have been fed. Wim inverts that. He’s done it through subtle ways of looking at the Afrikaans bible and creating it into this marble bust, sort of imposing South African-ness on a particular history, which is removed from the country. Wim is really interested in history and art history, looking at the traditions of marble and classical sculptural busts and he is also interested in material, in kind of looking at the different ways the material can invert itself. He creates these busts out of wood, out of marble, and out of books. Basically he carves it as one would a marble sculpture. Working with it as though it’s this obsolete material. The information in the encyclopedias, I mean, it’s a completely obsolete medium now.

He also creates sculptures out of polystyrene and then casts them in bronze, so this light, white, weightless substance becomes this heavy, immovable dark substance, which is another thing he likes to do: invert the meaning of the material.

The pedestal and its significance in Wim Botha’s spaces

He often decides to create rooms more than he decides to create sculptures. He creates interventions within the sculptures in the way that they are exhibited. So, the pedestals for instance, at times he does traditional, refined looking pedestals, other times he decides to use found wood, or chunks of wood, in other instances he suspends them, but it’s all just playing with the idea of presentation and how he’d like them to exist in space.

Each artwork travels with its own room. It could be a subtle piece of wood that emerges from the wall, or a suspended frame that implies particular kind of architecture in the space, so he likes to carve space. He likes to suggest new spaces: spaces within spaces. 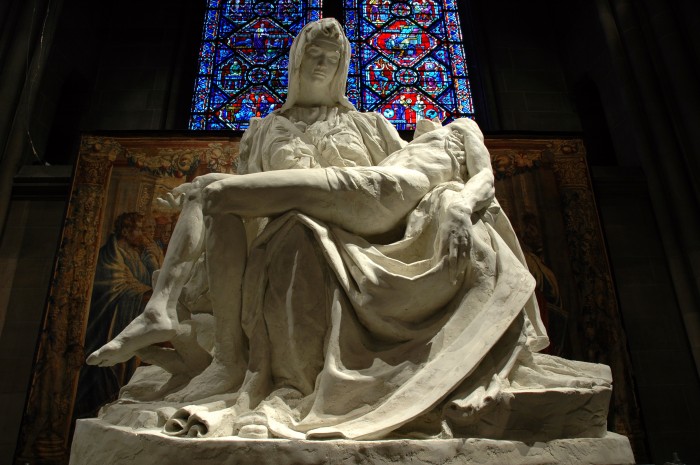 His most memorable work to date is this mieliepap “Pietá” that he made out of maize meal. He created the ‘Pietá’ to scale, recreated it, and carved it, as one would a marble block, but it was made out of maize meal, which is a staple food that is seen across the continent of Africa. There are those kind of subtleties, or particular kind of a poetic language that he uses and his choice of material.

This video interview and transcript © galleryIntell. Images © Wim Botha. Courtesy of the artist and STEVENSON Gallery.