Alison Rossiter: My name is Alison Rossiter and I am a photographer. I have been working with expired papers from the 20th century for the past several years. This involved finding packages of paper that were never used. The idea was to simply open these pakages of paper and process the sheets to see what kind of atmospheric damage may have happened to the paper in all those years, all those decades between me finding it and it being stuffed away somewhere on a shelf. 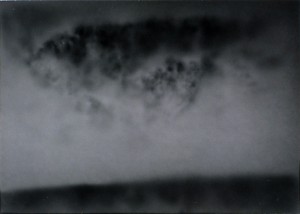 This particular print, which looks to me like a rain storm, and in fact this is a found photogram, I haven’t done anything to it – I’ve not exposed it to light – I am just processing it straight out of the package, and the package was unusual, because normally papers are wrapped in a dark, opaque, black piece of paper and then put in the box. This particular box had the paper wrapped in tan tissue paper, and one side of it was crincled and one side of it was still a flat fold and what happens, as you can see, the top of it is the crinckled side, where the light got through and it’s created an image that looks like a cloud. 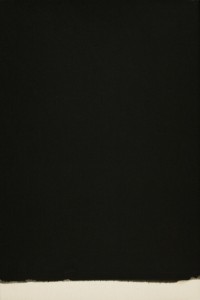 This particular piece is the paper that will only go black in the developer, and so it’s one that I’ve allowed myself to “selectively” develop. The reason I did this was because I saw the Richard Serra drawing show at the Metropolitan Museum of Art last summer and in his oil stick drawings he was working on a cream-colored paper, which has a distinct line where the black oil stick meets the color of the paper and I just stopped in my tracks because that division is important to me. I love that! I find that it’s very photographic, but what was happening in the Serra work was that the oil from the oil stick was wicking up the paper and it was leaving a smudge. I’m sure he didn’t mean for this to happen – it’s something that happen over the ages, so I went to my papers and rather than putting a dry piece of paper into the developer, which would allow me a very distinct line, I pre-soaked my paper, my cream-colored paper stock and allowed it to sit in the developer. I’m holding it, so that it’s completely submersed, and I’m allowing a wicked line where the developer is seeping, ever so slightly, and creating that line that, to me was my response to seeing the Richard Serra drawings.