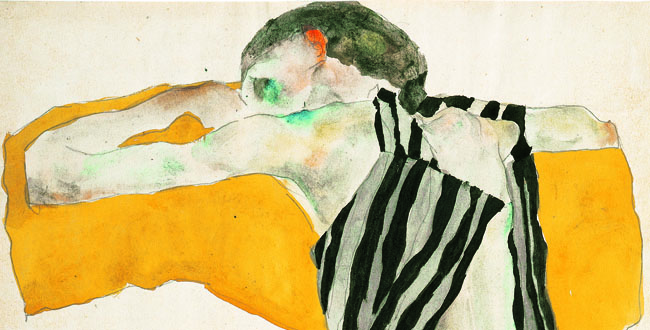 “Fin-de-siècle Vienna was a hotbed of sexual intrigue and exploration, from the pioneering studies of Sigmund Freud to the titillating plays of Arthur Schnitzler and the then-scandalous paintings of Gustav Klimt. Egon Schiele grew up in a world where the bourgeois double standard was rapidly fading, and a more open, egalitarian attitude toward sexual relations was emerging.” – Jane Kallir 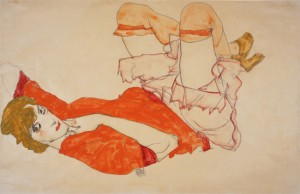 Schiele’s work has always been something of an enigmatic journey for me. I first saw his watercolors and drawings many years ago while working in a small poster shop on the Upper East Side of Manhattan. Our clients would request poster reproductions of famous paintings and Schiele’s work was in quite a demand. (Klimt and Schiele were the only painters from the Austrian Expressionism to be included in many of the catalogues, so artists like Anton Peschka, Max Beckmann, Oskar Kokoschka and others remained very much unseen.) Schiele’s hand was instantly recognizable – no other artist rendered his subjects with the same speed and confidence, same force or the same emotion. His angular, pointed hips, shoulders, elbows and collarbones; his exaggerated limbs and disproportionate digits; the bruised flesh of his models were impossible to assign to anyone’s hand but Schiele’s. 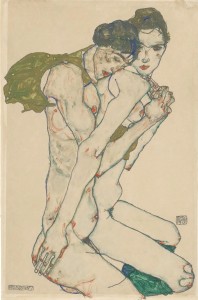 Of course, the poster catalogues didn’t include the more direct, and sexual watercolors and drawings, so the general public, and I at the time, had a limited pictorial vocabulary to draw from. A handful of semi-clothed nudes, portraits, and a landscape to introduce variation, but that was enough to ignite my interest in the artist and his works and send me on a quest for more. I made several pilgrimages to the Albertina Collection in Vienna when they mounted their Egon Schiele exhibition in the winter of 2006, spending hours examining every brush stroke, every pencil line, every watercolor and gouache stain in each of the 200 exhibits. Schiele became much more than a handful of tame drawings – the full spectrum of his emotion was now evident with all its full-frontal ambition, fear, confidence, insecurity, indifference and passion.

In March of this year, as part of our video interview series for galleryIntell we had a unique opportunity to interview Jane Kallir, Co-Director of Galerie St. Etienne in New York, author of many books on Egon Schiele and an acknowledged authority on the Austrian Expressionism. And then, again, I had a feeling that the world of Schiele has suddenly come alive. Jane talked about the symbolism in Schiele’s imagery, (“Seers”, 1913 below) his philosophies and his treatment of women as equals, which was, according to Jane, revolutionary for his time.  We see her expand more on the subject in her new book “Egon Schiele’s Women” where the woman, in all her incarnations, comes center stage, and we are offered a chance to consider the roles played by Wally, Gerti, Melanie, Edith and his “black-haired-girls”, among others, for ourselves. 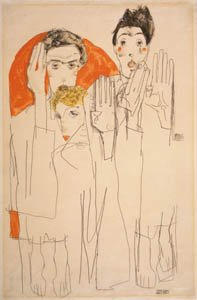 The book, published by Prestel, is a careful examination on the evolution of Schiele’s perception of various subjects: from his numerous self-portraits that focus on the artist’s sexuality, self-perception and contemplation of movement; to the exploration of children as models, but its primary focus is on his female subjects. The book identifies clear themes in Schiele’s work: allegorical paintings where Schiele explores the more philosophical concepts of finality and of life and death (“Death and the Maiden”, 1915), the ideas of blindness vs. sight (read vision, prophesy) as being integral to artists (“Seers”, 1913); his homoerotic compositions with pairs of reclining nudes in various stages of undress and awareness; a series of drawings that focus on a single female sitter who confronts the viewer with her exposed genitals and the more reticent portraits of his family members and patrons. 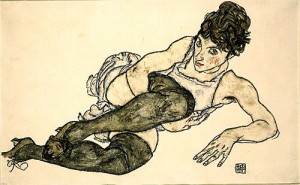 Ms. Kallir separates Schiele’s women by the periods in the artist’s life and roles they played in his work. From his sisters Melanie and Gerti Schiele, to his model, lover and muse Wally (Valerie Neuzil) and then finally to Edith Harms-Schiele, the artist’s wife, who was the subject of many of Schiele’s later portraits. While the emotional approach Schiele used for his depiction of these women differed, his techniques for the most part stayed the same. Throughout his oeuvre his figures were often extracted from any kind of identifiable background. There were no interiors or even a support upon which his figures rest – Schiele separated the figure from its environment and presented it to the viewer as the sole focal point. Placed within spaces void of any identifiable references they appear weightless. The artist further used “selective coloring” to punctuate key areas and features. Thus while his nudes appeared loosely washed in soft, flesh-toned hues, or simply left in a pencil outline, we can see that Schiele accentuated articles of clothing, hair, face, hands or genitals with strong fields of purple, red, orange, brown or black leaving the rest of the composition un-rendered, thus making this punctuation all the more powerful. 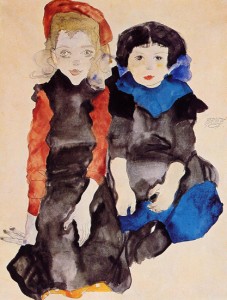 The book also includes many drawings and watercolors Schiele did of children and what is most striking about this body of work is the acceptance, or even the certain “matter-of-fact-ness” with which these young models gaze at the artist and, subsequently, the viewer. Clothed or bare, their expressions remain still and void of any question. Drawing after drawing, we see how Schiele uses the same approach for his child models as he does for his adults. The only apparent difference in Schiele’s treatment of children is that he presents them in more fluid positions that better conform to the viewers’ expectation of a model’s posture. Whereas his older models are often frozen contorted, shifting through the austere pictorial spaces with their rigid limbs in arthritic spasms, Schiele often depicts his children as needing care and protection. (“Group of Three Girls”, 1911,  “Two Little Girls”, 1911 above) A loud and clear exception to the innocence with which Schiele depicted his young models is the 1910 watercolor and pencil drawing titled “Black-Haired Nude Girl, Standing”.  Here, the disproportionately elongated upper torso with otherwise adult features is juxtaposed with a face of a very young girl. In his signature move, Schiele punctuates the lips, nipples and the girl’s genitals with a bright splash of orange.

The artist, who died in the Spanish Flu epidemic in 1918 is the subject of many publications, studies and articles, but time and time again Jane Kallir emerges as the undisputed authority, able to share with us her uniquely rich, well-informed and endlessly fascinating view on a genius, whose body of work has inspired so many subsequent generations of painters like Lucian Freud, who employed some of the very same expressionist techniques pioneered by Egon Schiele.

“From October 23 through December 28, 2012 the Galerie St. Etienne will host Egon Schiele’s Women, a loan exhibition of over 50 watercolors and drawings borrowed from the Museum of Modern Art, the Neue Galerie and numerous private collections.”

Images provided courtesy of the Galerie St. Etienne and Prestel.