“As soon as I find a state of confusion and darkness I realize how singular the emotion is. The forms are so evasive I must work quickly and even then the image is in transience and will disappear. The life of an image is that it is changing. My goal is to realize a form before it disappears which I often revisit to reactivate its energy.” – George Nama

The title Fleeting Images reflects George Nama’s take on reality: observing an object means to him perceiving changing images. Throughout his work he is concerned with the metamorphosis of a given subject – a body, a room, a city, a tree or a landscape – how it changes from one moment to another

Something we hear gallery directors and curators say over and over again during our interviews is that art never comes from a vacuum – it is always influenced by something. Be it new ideas, new philosophy, literature, music, nature, poetry – each work has a history of origin. As David Wojciechowski, Director at Shepherd W & K Galleries tells us, in George Nama’s work these influences are many and varied. Nama’s city of his birth, Homestead, Pennsylvania played a major role in his artistic vocabulary and imagery created in the early 1960’s. 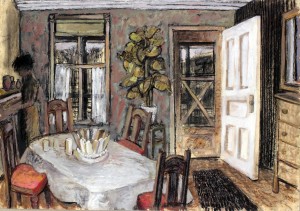 Industrial and rugged and largely void of color, Nama recreated familiar city vistas in a rich palette of blacks and grays. Using casein paint, oil sticks, watercolors and inks Nama also masterfully reproduced interiors of his mother’s living room, and his grandmother’s kitchen. These everyday views were done in a more diverse palette of opaque yellows, pinks, greens and grays.

Some of the later works, his openly expressionistic sketches of trees, fast and precise, figures and country landscapes point to his transition towards abstraction. In fact this exhibition is organized in a way that allows the viewer to see the artist’s progression from figurative to abstraction and how simple vegetal forms (the gnarly tree limbs, the nudes) would later reemerge as twisted abstract forms mounted onto pedestals. 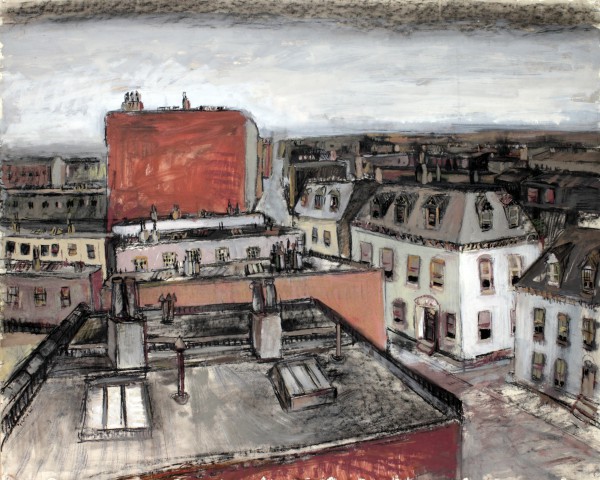 Already involved with poets and writers since the early 1960s, Nama collaborated in 1976 with his friend, the French poet and art historian Yves Bonnefoy, on artist’s books. This in turn fostered a series of artist’s books and exhibitions with Alfred Brendel and Charles Simic.

During his long career, Nama has been represented in numerous important exhibitions, galleries, and public collections, such as The Morgan Library, the Boston Athenæum, The Metropolitan Museum, the Brooklyn Museum and the Carnegie Institute. He was recently included in the distinguished international art fairs at Maastricht and the Salon du Dessin in Paris.