Across the Ravaged Land – Nick Brandt’s exhibition at Hasted Kraeutler

An emotional, moving and at times somber exhibition, Brandt’s subjects are Africa’s vanishing animals. Overcast in a warm sepia vail, these are intimate portraits of magnificent animals, some of whom have already been killed. Photographs in this exhibition are part of the final installment in the trilogy: On This Earth, A Shadow Falls and now, Across the Ravaged Land at Hasted Kraeutler Gallery in New York.

A life-changing journey that started when Nick Brandt first arrived in Kenya as a videographer for Michael Jackson’s Earth Song has since evolved into a personal mission to save the animals living in the Amboseli National Park in Kenya. He travels the savannah grasslands in search of the animals and spends days, weeks and months with them creating a personal bond between himself and the animal. Brandt’s photographs are not hurried exotic snapshots made from the safety of a covered car. There are no telephoto lenses, no in-camera tricks to make the subject appear closer, there is no Photoshop or extensive image enhancing process. Instead he captures moments from their every day lives: moments of joy, contemplation, sorrow, pride, fear and loss. As Sarah Hasted put it: “he is as close as you think he is.” 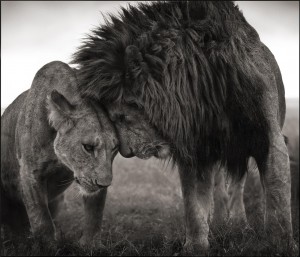 Most of the photographs in the trilogy offer a rare view into the emotional state of these magnificent animals, most of us will never see in person. His 2008 photograph Lions Head to Head taken in Masai Mara, is nothing less than a family portrait with a full range of recognizable human emotions: love, trust, unity and respect.

These are very personal portraits of the animals that are often in danger of being killed for the sake of satisfying a range of decorative or pseudo-medicinal demands of some of the far eastern economies. Nick Brandt photographs these lions, elephants, cheetahs and zebras mainly because he wants to capture their presence before they vanish forever.

In 2010 Nick Brandt established the Big Life Foundation – a private organization whose mission is the preservation and protection of the Amboseli animals. Together with the authorities the foundation captures poachers, educates them and then hires them to protect the animals. As Sarah Hasted said in our interview, a portion of the proceeds from the sale of these photographs goes to fund the organization and enable the guards to preserve the animals beyond the reserve’s boundaries.

From Nick Brandt’s interview with Barbara Davidson of the Los Angeles Times:

In one critical area in East Africa, I felt that we could do something to protect an extraordinary 2 million-acre ecosystem that is home to one of the greatest remaining populations of elephants in Africa. Three years after starting Big Life, with 310 rangers in 31 outposts, the incidence of killing in the region is way down. Big Life is the only organization in East Africa that has co-coordinated anti-poaching teams operating on both sides of a country’s borders. The animals don’t pay attention to borders. Nor do poachers. So neither can we.