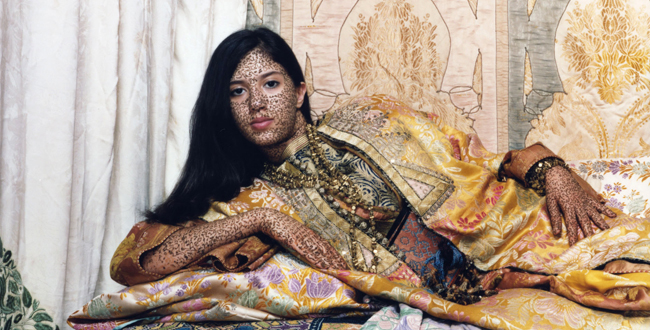 Top museum and gallery exhibitions to see in NYC.

THIS IS A MUST-SEE EXHIBITION.

James Turrell. This is the first retrospective of the artist’s work in 30-some years. The artist uses LED bulbs to “paint” spaces with light and transform our perception of the space itself. Before this long-overdue retrospective Turrell’s light installations were exhibited at the Garage Center for Contemporary Art in Moscow, MoMA P.S. 1 and many other museums around the world. Son of an aeronautical engineer Turrell is famous for transforming a natural volcanic crater (Roden Crater) he purchased in 1976 into an open air naked-eye observatory designed to observe natural phenomena. The Guggenheim exhibition and its core installation, Aten Reign (below), makes the building’s famous rotunda the focus of the exhibition, using Frank Lloyd Wright’s architecture as the primary “canvas” upon which Turrell then exercises his art. The natural and artificial lights used to create the light sculpture ultimately forces us to re-shape our perception of the space itself. Organized in conjunction with the Los Angeles County Museum of Art and the Museum of Fine Arts, Houston, James Turrell comprises one of three of major Turrell exhibitions spanning the United States during summer 2013. 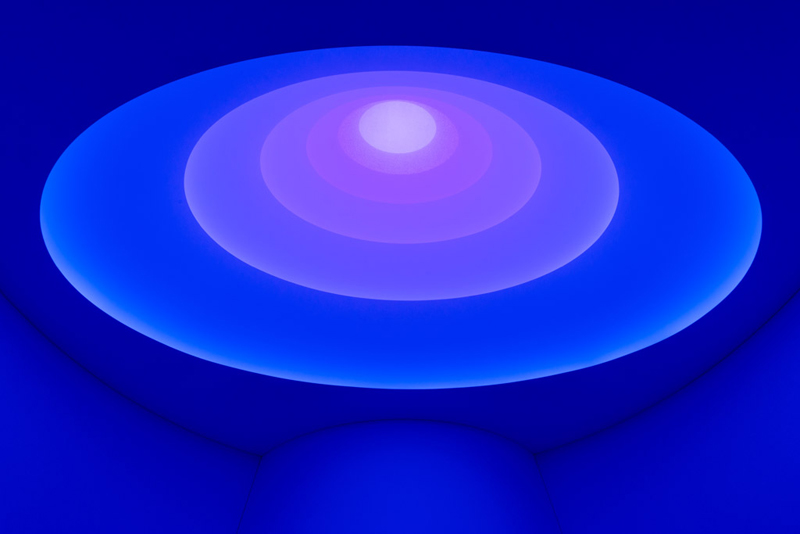 Lalla Essaydi. The exhibition officially closes tomorrow but a little bird has told us that it may just be extended for a short while longer, so you probably have another couple of weeks to see Essaydi’s richly tactile compositions staged to recall various 19-th century Orientalist paintings. Now New York-based Lalla Essaydi engages her Moroccan heritage and Western upbringing to weave together a multi-layered narrative that exposes the contrast between a [romanticized] western perception of arab culture and one based on a more “real” history.

From the artist: “The physical harem is the dangerous frontier where sacred law and pleasure collide. This is not the harem of the Western Orientalist imagination, an anxiety-free place of euphoria and the absence of constraints, where the word “harem” has lost its dangerous edge. My harem is based on the historical reality; rather then the artistic images of the West – an idyllic, lustful dream of sexually available women, uninhibited by the moral constraints of 19th Century Europe.” Lalla Essaydi, 2010

From the gallery: “During his long career, Nama has been represented in numerous important exhibitions, galleries, and public collections, such as The Morgan Library, the Boston Athenæum, The Metropolitan Museum, the Brooklyn Museum and the Carnegie Institute. He was recently included in the distinguished international art fairs at Maastricht and the Salon du Dessin in Paris.” 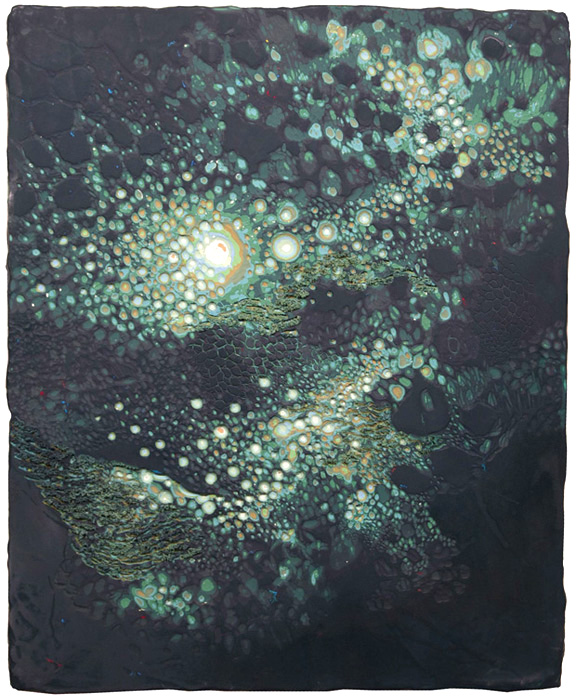 Karin Waskiewicz: Selected Works This exhibition is organized in collaboration with Schroeder Romero Gallery and is on display in the back of the exhibition space. From the gallery: “Known for her excavated, carved and rebuilt surfaces revealing thick layers of acrylic paint, Waskiewicz’ paintings feature hundreds of small, imperfect circles clustered in sprawling groups. The resulting patterns recall organic systems and serve as an exploration in both mark-making and the physical qualities of her materials.

Works in this exhibition are very similar to the multi-layered and carved paintings by David Allan Peters, previously profiled in this column, but have a different rhythm and somehow tell a very different story. Waskiewicz’s compositions seem to have a more coherent organization of various elements and a stronger sense of continuity.

This article © galleryIntell. Images courtesy of the galleries.