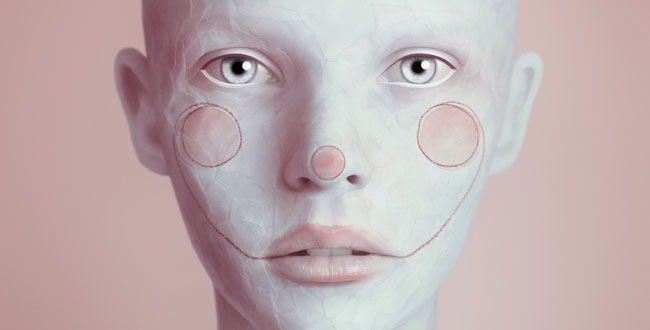 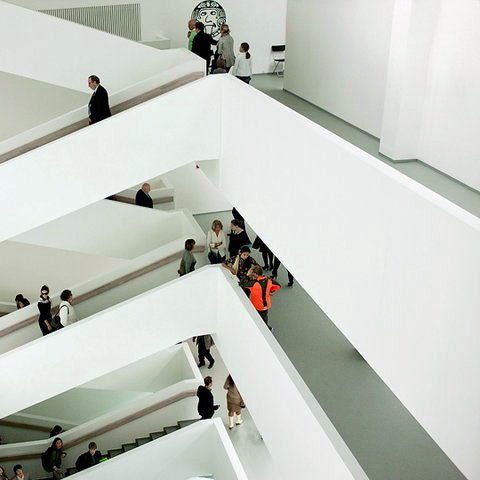 The new building of the Multimedia Art Museum stands on an old street, typical of central Moscow, but it’s new and reminds more of conservative structures in Berlin or Vienna than of the new Russian urban architecture. It’s refreshing. Those of you who’ve been to the Whitney or the Guggenheim in NYC will automatically draw similarities and recognize the influence of both signature designs in this new home of Olga Sviblova’s main exhibition venue. The beauty of the museum’s exhibition concept is that it married traditional photography with painting and contemporary photography, and each show planted on its own individual floor was extensive, well represented and rather thorough in its samples.

I wandered up seven flights of stairs to reach Oleg Dou’s personal exhibition and found myself in an otherwise austere space. Few visitors floated through, crossing the gallery-sized space, arriving at opposite walls and back again. It seemed they arrived at each portrait to introduce themselves to the reticent faces suspended on the walls, stayed as if in a private, silent conversation and went on to question another face. Dou’s portraits (his born name is Douragin) seem to do many things at once. 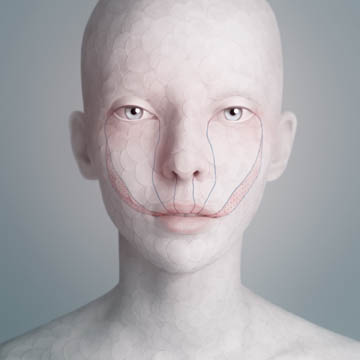 First of all they startle you with their perfection. Everything about the face is flawless: proportions, surface, shape. In ancient Greece they would have been referred to an “canons”. My first association was with the “pre-cogs” from Steven Spielberg’s “Minority Report.” Remember the triplets with porcelain-like skin who floated in tanks and foretold crime? They existed in a secluded isolated world, untouched by the common air. Likewise, there is something very untouchable about Dou’s portraits. Fueled by his phobia of being photographed, he captures only the likenesses of others – an antithesis of Cindy Sherman through and through. 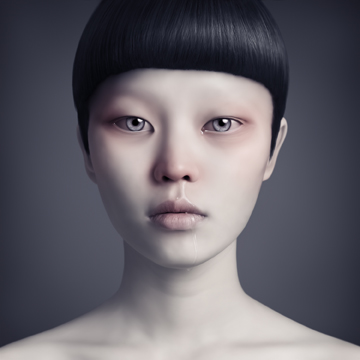 If you look at his previous work you’ll see a greater diversity in color and facial types but this exhibition is somehow monochromatic. His faces are “laminated” with white round paper scales, newspaper or strips of paper. Most have colorful pencil lines connecting eyes with ears, mouth with nose, influenced by Victor Hugo’s “The Man Who Laughs“, a film he saw as an impressionable 5-year-old. Unnerving at first, but somehow the discomfort quickly faded away and I became mesmerized with each curvature, each dot and each pencil stroke. The lines just seemed to make sense-they fit. 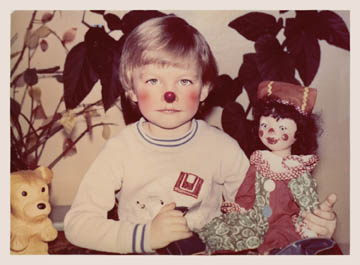 When I met him several days later to do a video interview,  he was in utter shock when he learned that he’d have to speak on camera during our interview,  but soon found his own space with me and the camera, we talked about the surfaces and how he created them, but more importantly why. I wanted to know if these polished, doll-like surfaces were a comment on something cultural, but  his explanation was surprisingly simple and honest – it started out as a mistake. He was playing around with Photoshop, working on a portrait of a friend and went too far with the various filters. But as they say, there are no mistakes in a creative process, each one is a veiled step towards the final concept.

In a further protest of being told to smile for his childhood photographs his models now project indifference, melancholy and a sense of detachment from this reality. None smiles. Some even repel you, but not for long. As I watched people interacting with each piece it became clear that their intrigue lay in trying to peel away the layers Dou just as carefully put in place. They, as I, looked for the human core, the touchable and recognizable in each face – much like we do with strangers when we first meet them. We search for their true, real, human, recognizable core.

Dou mentioned that each face was a self-portrait and when you see him in person the statement makes much more sense – his fragile and refined features, his uncertainty, coupled with determination echo in many of the faces in this exhibition.

Oleg Dou’s image has been chosen for the cover of the latest version of Adobe’s Photoshop CS6.