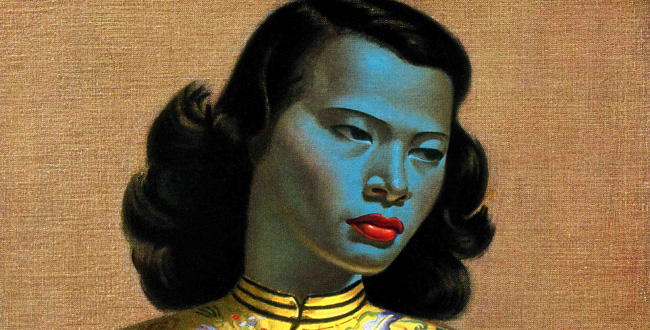 In this week’s round-up of the top art stories, we cover topics ranging from the cult level image of “Chinese Girl” to “Dutch Mona Lisa” arriving in San Francisco’s museum.

It was painted by Russian painter Vladimir Tretchikoff and has been one of most popular images to be reproduced in form of posters & prints.
She is called the ‘Green Lady’ sometimes due to the beautiful, unusual color of her face.  Coventry Telegraph

The art fair rides on the wave of positive reactions and favorable market sentiment.
Interestingly, there are more millionaires in Asia Pacific region than in North America as per a 2012 report. Bloomberg.

Johannes Vermeer’s ‘Girl With a Pearl Earring’ and other paintings are currently on loan at  San Francisco’s de Youg Museum from Maurishuis Museum in The Hague. Los Angeles Times.
Know more about this painting here.

The Modigliani market remains one of the most challenging and inconsistent in terms of authentication and provenance, as the artist was known to keep very poor records of creation and sales, and gave away many paintings to pay his bills. Forgers routinely advantage of this record-keeping short coming and the market is full of Modigliani forgeries. Christian Parisot, the now-infamous Modigniali expert who started his career as the secretary to Modigliani’s daughter, has been arrested for providing fake certificates of authenticity for dozens of Modigliani paintings. The fakes are “worth” €6.6m! The Art Newspaper.

Largest pollen installation by Wolfgang Laib is being exhibited at MoMA, New York!

‘Pollen from Hazelnut’ is a unique installation made of pollen collected by the artist.
Contrasting the busy activity of the visitors at the museum and the quiet nature of the pollen, the artist called the setting a “beautiful tension.”

His works echo the mix of pathos and abstraction of post-minimalism, but he denies this connection, preferring to talk about Eastern philosophy. He came to prominence in the ‘70s and ‘80s, mouthing phrases about the healing virtues of art and universal spiritual aspirations that would make any postmodern cynic cringe: His art, he has said, seeks to use materials that are “so universal, any human being can relate to it without language or explanation.” Artinfo.

It is interesting to note that many historically important paintings have women as their prime subject. Contrast that with the number of female artists that have seen the kind of wild success that their male counterparts have enjoyed through the centuries. The numbers are lop-sided. Here is to more women artists being recognized for their talent. Happy weekend!