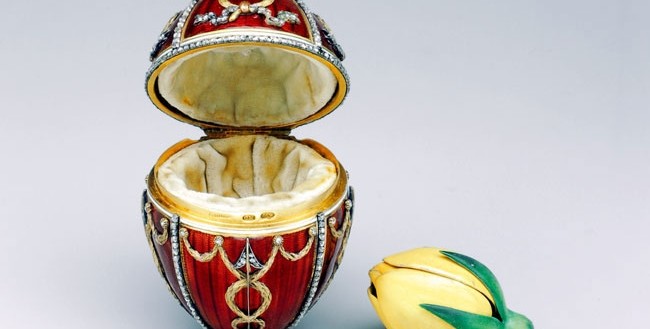 In the top art stories this week, the famous Fabergé takes center stage as we find out about two collections in museums dedicated to the beautiful creations. In more stories, we explore highlights at Christie’s and Sotheby’s contemporary art auctions this coming fall. Read on…

Where would you go to see the gorgeous Faberge collection? St. Petersburg, of course!

If you want to view the best of anything, go to its place of origin. St. Petersburg will have two museums dedicated to the artist Peter Carl Fabergé and his extraordinary masterpieces. The first collection will comprise of a 4,000 piece donation by billionaire Viktor Vekselberg (which he bought from Malcolm Forbes for an estimated $120 million!). The second will be at the Hermitage State Museum in the Fabregé Rooms. So much finery in one city definitely calls for a trip to Russia. The Art Newspaper

Bacon and Freud come together at Christie’s New York

Francis Bacon’s triptych, ‘Three Studies of Lucien Freud‘ will be offered at Christie’s on November 12th. This piece symbolizes the height of the friendship between the two artists and was made by Bacon 25 years after they met. This painting is set to break the previous record of $86 million for this artist, established in 2008. If you want to be among the first to see the triptych, plan to be at Christie’s King Street offices in London during the Frieze Art Week October 13 – 18, 2013. Source: Art Daily

Sotheby’s New York will be auctioning Willem de Kooning’s ‘Untitled V’ on November 13th, 2013 at their Contemporary Art auction. Made in 1975, at a time when de Kooning returned to painting after focusing on sculpture, this piece is a pivotal point in his watershed period. It is estimated to bring in $20-30 million and has not been seen in public since the 1980’s. Make sure you see this colorful masterpiece at the Sotheby’s preview before it is auctioned off! Source: Artinfo

Featured image replica of Rosebud egg. Image of Imperial egg can be viewed at Faberge.com