I always said that to understand an artist’s work you have to understand the artist. Learn about their personal history, their inspirations, the way they construct their language. For a visual artist the origin of their imagery is like the genesis of their entire existence. It’s the place from which they grow their roots, the place that in one way or another informs their entire body of work. So when I first see a new work of art by someone I’ve never heard of I ask those questions. I need to understand how the artist arrived at his means of communication. Why a painting. Why a drawing. Why a collage. Why a photograph. And art fairs are a great place to discover new artists or new works by the artists you know. When I came across Wangechi Mutu‘s work at Susanne Vielmetter Los Angeles Projects during Art Basel Miami Beach it was my moment to discover an artist. It was a large horizontal multi media work (seen above). It was disturbing. It was also hypnotic.

And then a month or so later a friend alerted me to a course at ICP where Mutu was to give a talk. I signed up. Truth be told, I kept forgetting about the other lectures in that series, but I made sure I make the March 12th event.

A brief introduction to a packed lecture room and there she was – hip, stylish and very….present. I say that only because in all my years of talking to artists many seem to have a very difficult time withdrawing themselves from their interior creative space and, how should I say it, re-joining the rest of society. They often can’t verbalize their process, their ideas, what informed their work and so the conversation becomes a series of “leading-the-witness” as lawyers would call it. Wangechi was impeccably eloquent and articulate and took great care to give the audience the history we needed to understand the genesis of her imagery. 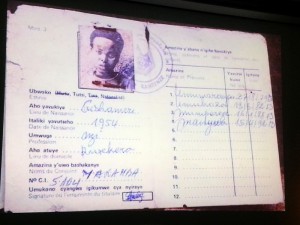 Wangechi began by talking about her native Kenya’s colonial history. How the country, so reliant on native traditions was stripped of its culture when the British arrived and took their land and enslaved tribe after tribe, often inciting tribal war along the way. Having lived in Africa for many years I am well familiar with the narrative. But my stories are about the Ethiopians whom I’ve come to know very well. Kenya’s history is far more brutal. The British were far more cruel, more surprising and far more sadistic in their methods than the Italians and images (photographs of earlier events) Wangechi saw in her youth made a deep impression on her as an artist. The injustice, the suffering, the inhumanity of one people towards another informed her early work and shaped her visual vocabulary. Those works are very difficult to look at, and I probably wouldn’t want to return to them, but the thread was visible. (Image on the left is a photograph of an African Tribal ID card issued by the colonizing governments to identify people according to their tribe.) 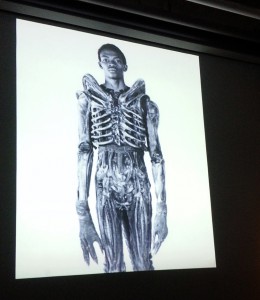 Immigrant artists (aliens within a new society) often focus their work on the issues that face their motherland, issues that they struggle with in their adoptive home or issues that bridge the two spaces. Physical and emotional. And, more often than not, it usually comes down to Identity. Their absolute identity within the society as a whole or their identity within a specific time and place. Likewise, women artists often address the now-familiar themes of gender inequality, gender perception and gender-specific imagery. Perhaps that’s why museums feel the need to mount exhibitions that expose those subjects. I can’t help but feel that those questions have been asked so many times by everyone imaginable that the very inquiry loses potency. Media, music, film and advertising industries continue to use the same themes and artists continue to complain. One feeds the other. One needs the other.

(The man in the photograph is the 7ft 2in Nigerian actor Bolaji Badejo, a man who played the Alien in the 1979 film) 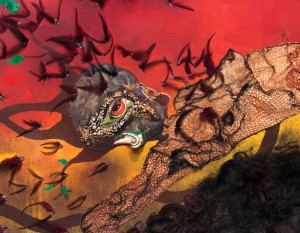 Her later collages – constructions of various media on linoleum that together recalled broken, mutated bodies with disproportionate, disjointed and alien limbs (here is that word again) are fascinating to look at, to examine and to decode. Trying to work out the various media alone is a fun game, but her work deserves much more than simple deconstructing. Her images are so complex in their multitudes of references, sources, materials, layers, textures and the very process of birthing one of these works is so clearly intimate and personal that as a viewer you feel a duty, a responsibility to invest time and effort to read them.

I am still not a convert to Mutu’s work just yet. I like some of it mainly because of the rich historical references, but the rest is still is stretch for me. Beyond the self-imposed obligation to understand it, I am still very much of an outside observer. I think it’s because I prefer more subtle means of communication, but that assumes that the issue at hand can be confronted and explored in subtle terms. Wangechi’s themes (exploitation of black women in various media) are anything but so her imagery echoes the intensity of her subject.

She is a marvelously engaging and involved artist who brings a great deal of information and emotion to her work. So wether or not her imagery, her commentary, relates to your own position and feelings, you walk away with a firm understanding that the questions of identity and belonging more than the startling pornographic references lie at the core of her work. These are the themes that will render her work relevant for the future generations. These are the issues that retain their resonance.