“Gutai Art does not change the material but brings it to life.“

The process of creating a work of art is often laborious, private, very complex, and requires intense and prolonged focus. Rarely do artists invite the audience to witness it. So, when Hauser & Wirth sent out an announcement that Takesada Matsutani, member of the second wave of  Gutai artists will be doing a performance at the Upper East Side Gallery, I had to see it. We mingled downstairs, waiting for everyone to arrive and then made our way to the second floor where a camera was set up in front of a large horizontal work that featured a vast field of dense black graphite across the top portion of the suspended white surface. The bottom half was bare and dropped to the floor, waiting to be marked. As artists, critics and collectors gathered in front of the yet-unfinished painting, Matsutani (he goes by his last name) took a wide brush and in one swift, continuous motion made a wide brush mark across the length of the paper surface. And just like that in 30 seconds it was over. The work was complete.

In front of us was a juxtaposition of two parts: one a deeply meditative and time-consuming, neatly organized and quietly restrained field of graphite marks. Another – a burst of the artist’s energy expressed through one controlled yet forceful motion. Spontaneous and uneven, lacking perfection of form and line, yet in perfect harmony with the constrained order of its sister element above. 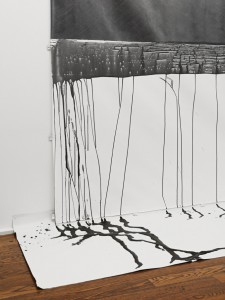 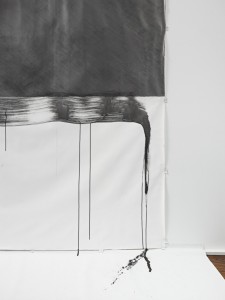 As the audience arranged itself in front of the artist, art dealer Olivier Renaud-Clémentand, and Reiko Tomii, an independent scholar and moderator for the evening, Matsutani began to speak about the influence Gutai philosophies had on his art. Principal among them was its founder’s demand of all its members to create something new, something that’s never been done before. Jiro Yoshihara expected his artists to find new materials, new ways of expressing themselves, create and innovate. Matsutani soon discovered his material: vinyl glue and his technique: blowing air inside the hardened surface to create subdural air bubbles, using hair driers to shift and shape glue’s drying surface and manipulating the medium to create a three-dimensional painting. 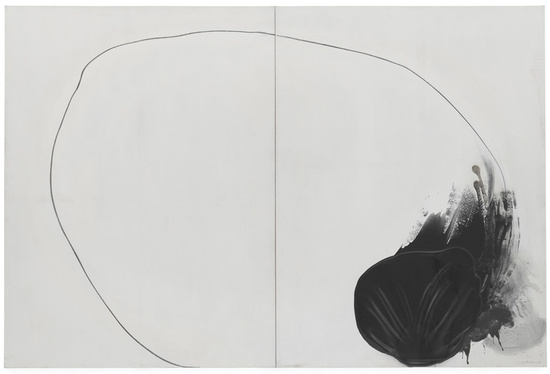 Matsutani, his wife Kate, and I sat down at the 69th street gallery several days later to talk more about his process, inspirations and how he brings together traditional Japanese art forms and contemporary philosophies. Below is the transcript of the video interview with the artist.

galleryIntell: You’ve likened your painting process to calligraphy – a skill that takes years to master and requires tremendous focus and discipline. In your own work, elements of practiced, meditative and perfected movement, like those of calligraphy, are often disrupted by a spontaneous gesture that can be viewed as a disruptive and a creative force. Tell me about that process.

Takesada Matsutani: My epoch in the 60’s was Action Painting. I am quite influenced by that movement, but I started to use vinyl glue, which takes quite a lot of time to dry and afterwards I put color, so this kind of the moment… Vinyl glue takes time to completely dry, to make shape and composition both. Calligraphy is kind of a movement; I like it, but how to continue my idea, with glue as it takes time. So how to make my work original and make it fresh. Still I am thinking about it.

GI: What are your preferred materials?

TM: Glue has a transparency then it becomes dry and becomes a little bit opaque, but even behind it there is color and you can see transparency, so we make space that’s why I always use this type of glue and color. Sometimes black I’ll use behind blue, green. And finally I do graphite pencil also. 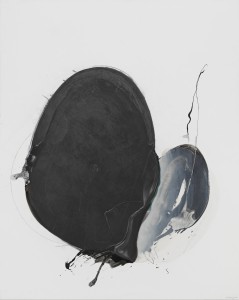 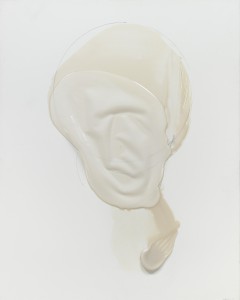 GI: How do you achieve balance in your compositions? 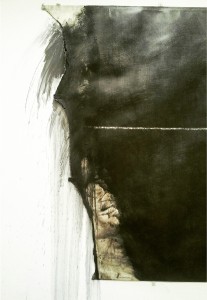 TM: It’s a difficult question, but I think we live every day as paintings do… I am satisfied – I stop. That’s when I’m finished. I think, I’m finished. Don’t think too much about it – just do it. We call it hara – hara-kiri. In Japan we sit down on the floor and make tea ceremony, sometimes before warriors to to battle they sit down and have tea, but they always put the power here. Chikara we call it, not from the heart – here. How do you say it? Bend the legs and we are very quite, concentrate the mind and then we go POW.

GI: What are the artist’s responsibilities to the viewer?

TM: We have quite a sophisticated mind. Our speech, our art too, so not only paintings, music, language, literature, and poems. And that is what humans make. And humans can’t make it if they don’t have the freedom to look at this moment. I must honestly from my inside, create a sense of beauty and to communicate. It’s not producing cars or camera, that’s also beauty, but ours is something very special, they are creative things. We have to, we must do it. We must always communicate with each other. That quality is important.

The Gutai Art Association was founded in the summer of 1954  by Jiro Yoshihara and seventeen other young Osaka-area artists… The Gutai Art Manifesto declared, “Gutai  Art does not change the material but brings it to life.“

Matsutani has often recounted Yoshihara’s single requirement for admittance to the Gutai circle: whatever an applicant showed him had to be totally new. Encouraged by Motonaga, whom he had chosen to be his mentor with that prospect in mind, for several years Matsutani experimented in search of a technique that would match his interest in the natural elements and biomorphic forms in particular. This curiosity had been heightened by a biologist friend who showed him cells under a microscope. Matsutani was looking for the right material to reveal itself to him so that he could appropriate it. “After a period of experimentation, in the spring of 1962 I had the idea of using vinyl wood glue, which you could find anywhere… By laying out a canvas flat on the floor and pouring glue on it, I obtained a sort of circular pancake, and I immediately turned the canvas over so that the glue would start to run. The glue began to drip, and as it dried, stalactites formed. They looked like the udders of a cow. It happened to be a windy day, so that the glue formed blisters as it dried.”  Before long, instead of relying on the chance intervention by a natural force, he would produce the gust of air himself by blowing through a straw to make the glue swell up. After noting the interest shown by Saburo Murakami and Shuji Mukai, already Gutai members, Matsutani took the risk of presenting these experiments to Yoshihara who, together with Michel Tapié, immediately recognized the novelty of this method. Most importantly, these experiments revealed the possibilities offered by the use of this material to Matsutani himself. They still amaze him to this day. – Germain Viatte. Paris, October 24, 2012

This video © galleryIntell. Artwork © Takesada Matsutani courtesy of Hauser & Wirth and the artist.