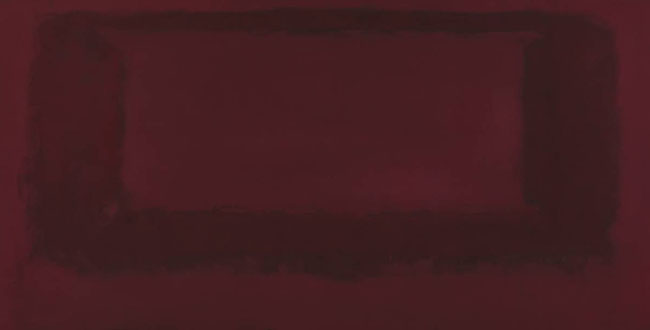 One of the advantages of living in New York City is the access to the vast cultural resources the city has to offer: the Museum of Modern Art (MoMA), with its remarkable collection of 20th century art, the Metropolitan Museum of Art, the Frick Collection, the Neue Galerie, the Guggenheim Museum are always here to inspire and feed our souls. It is in New York that I first discovered Rothko’s “classic paintings” at The Metropolitan Museum of Art and began my journey towards understanding abstraction.

The serene simplicity of Rothko’s forms still overwhelms me as I consider all their implications and depth. The certainty, with which his soft color forms with their indistinct, blurred edges float one above the other, having found their predetermined space on the vast canvas, makes one accept his vision without ever questioning a single gesture. There is a sense of balance and harmony to every element in his work: every brushstroke has to be there and nowhere else, and it has to have the very same opacity or transparency and not a touch more. 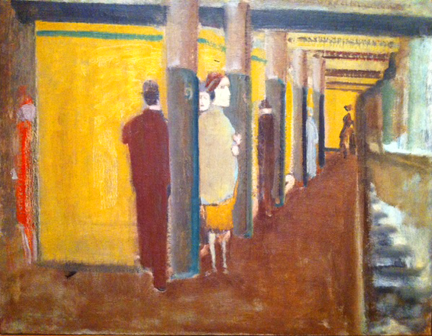 He arrived at this deductive structure, empty of all direct references to a distinct human form, after years of exploring figurative compositions. A series of figurative works later known as the “Subway Series” was probably his most complete bodyof work featuring recognizable objects. The converging lines of the subway platforms and the isolated figures, quietly floating upon them were soon reduced to a symbol and then further distilled to a point of universal recognition – a simple suspended color form. The scale also changed. Rothko’s canvases expanded to contain the energy of his new language. Through this transformation, however, he managed to retain the intimacy of a whispered conversation between his work and the viewer. 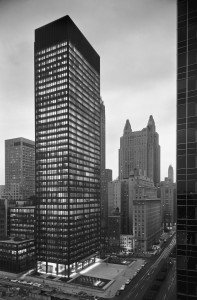 Works from the first decade of his “classical” period were full of luminous, vibrant, multi-layered bands, advancing and retreating with a bold sense of presence and intention, but Rothko painted them as stand alone statements. Each painting was a finished sentence, containing within it a beginning and an end. The Seagram commission that came to Rothko in the spring of 1958 changed the previous paradigm and allowed Rothko to formulate a new platform upon which he could now construct his new visual lexicon.  The commission called for a series of large-scale canvases to be installed at the new Mies van der Rohe and Phillip Johnson building on Park Avenue in New York.

The space was more specifically the much-anticipated The Four Seasons restaurant where the Rothko canvases were to hang in the main dining room. He accepted the commission and rented a brand new studio space that closely matched the dimensions of the main dining room. There he positioned the canvases as they were to be installed in the Four Seasons restaurant. Rothko conceived the series in a way that allowed each painting to be created relative to one another – each canvas was a continuation of the previous composition and together they formed one single emotion, one single conversation, and one single sense of space. With his murals Rothko created a unique controlled environment where all the work acted as a single dominating force with the viewer now subject to the space. 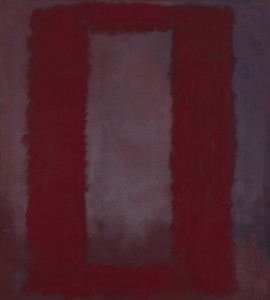 Prompted by the wish to evade the decorative references made to his earlier work, Rothko now employed a deeper, more somber palette. The vibrant yellows and blues were replaced by the deeper and more emotionally mature plums, deep reds and heavier blues. No longer did we see the energetic combinations of oranges, yellows and whites. Now the mood of his palette was far more contemplative and reflective, more like a light that’s fading away, receding into the distance, away from the viewer – the bright flashes of color dimming with the onset of dusk.

The Seagram Murals – in the end Rothko created 30 of them – seemed to be Rothko’s own exercise in the permutation of the brilliant reds, deep browns and rich blacks. He meticulously explored the balance and the weight of each color in relation to the shape through which it was communicated. The bold, yet feathered horizontal bands in several of the murals, a new direction taken by Rothko for this commission, create a weighted tension between the foreground and the background. His vertical and horizontal “outlines”, almost architectural in origin and form, direct the viewer to address the work in a direct and focused state of mind. Rothko reinforced the architectural structure of his new paintings by stating that these “are not paintings”; instead he proclaimed, “I have made a place.”

Rothko also created long horizontal paintings, quite unusual proportions considering his previous compositions, but well suited for the space for which they were intended. (See the featured image above)

The now famous story of the Seagram Murals tells us that Rothko cancelled the commission (the passionate telephone conversation between Mark Rothko and Phillip Johnson was masterfully depicted in Jon Logan’s magnificent play “Red” staged on Broadway in 2010, where the theater smelled of linseed oil and turpentine) and returned the advance because he grew increasingly agitated at the idea that his paintings, would hang as simple wall decorations in the most expensive restaurant in Manhattan while the rich patrons spent “obscene amounts of money” and paid no attention to his work. Rothko was even quoted as saying: “I accepted this assignment with strictly malicious intentions. I hope to ruin the appetite of every son of a bitch who ever eats in that room.”** 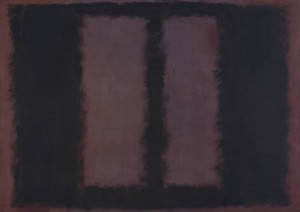 In the end, the series of murals came to be referred to by the name of its original client – The Seagram corporation and are still displayed under this name in various exhibitions. The most famous group of the Seagram Murals is in the permanent collection of the Tate Modern in London. The museum received these paintings in 1969 as a gift from Mark Rothko, and displayed them in the exact sequence envisioned by the artist. The experience is largely about time and space. How long can you address a single work? How long does it take to form a conversation with it as well as with the entire set of paintings? The viewer is encouraged to meditate on the colors and contemplate his own space, his own being in relation to the canvases. 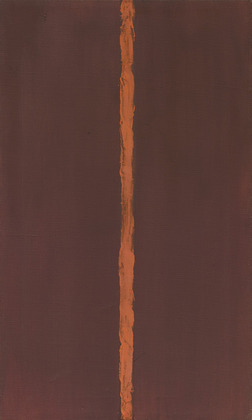 Rothko completed two other multi-painting commissions following The Seagrams Murals. In 1961 – 1962 he completed a series of works commissioned by the Harvard University. The familiar horizontal floating color forms that have been replaced by the wide bands of vertical “frames” have altogether disappeared in the Harvard paintings. The new gesture is more reminiscent of the early Barnett Newman zips, where he still allowed the color to feather across the soft boundaries and experimented with space. Rothko’s Harvard canvases seem, somehow, more tragic and deeper impregnated with a sense of irony and a desire to break free.

The other multi-painting series is on permanent view at the Dominique and John de Menil Collection in Houston, TX. Envisioned as a non-denominational chapel, Rothko conceived the multi-faceted chapel and the paintings within it to help facilitate a spiritual experience for the viewer. The Rothko Chapel demonstrates the artist’s continued involvement with architecture and his dedication to creating an environment for his works. The somber dark palette of his Chapel paintings recalls Malevich’s The Black Suprematic Rectangle, 1915 (better known as “The Black Square”) where the canvas serves as a screen upon which the viewer projects his own thoughts and images. Each canvas then becomes a source of unique reflection for each individual viewer.

Some of the other paintings from this commission are on view at The National Gallery in Washington D.C.