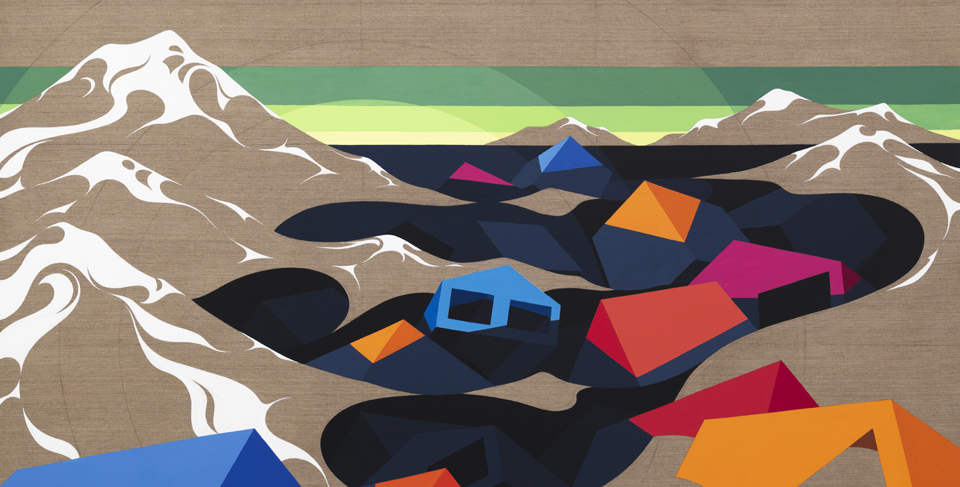 In strictly formal terms, Eske Kath’s work is a skillful and restrained integration of traditional Japanese landscape iconography and the flattened perspectives of the Suprematists and Fauvists. His paintings are easily recognized by the outlined segments of raw linen contrasted by the deeply saturated, opaque shapes and geometric figures that are often shown amid mountains, waves and Henri Rousseau-esque jungles. These objects are not at rest. Every cube, cone and house, despite the lack of the traditional perspective, appears to be in motion. In some compositions they are carried by powerful currents towards and away from the viewer or appear deposited in trees and forests as if by a great destructive force. 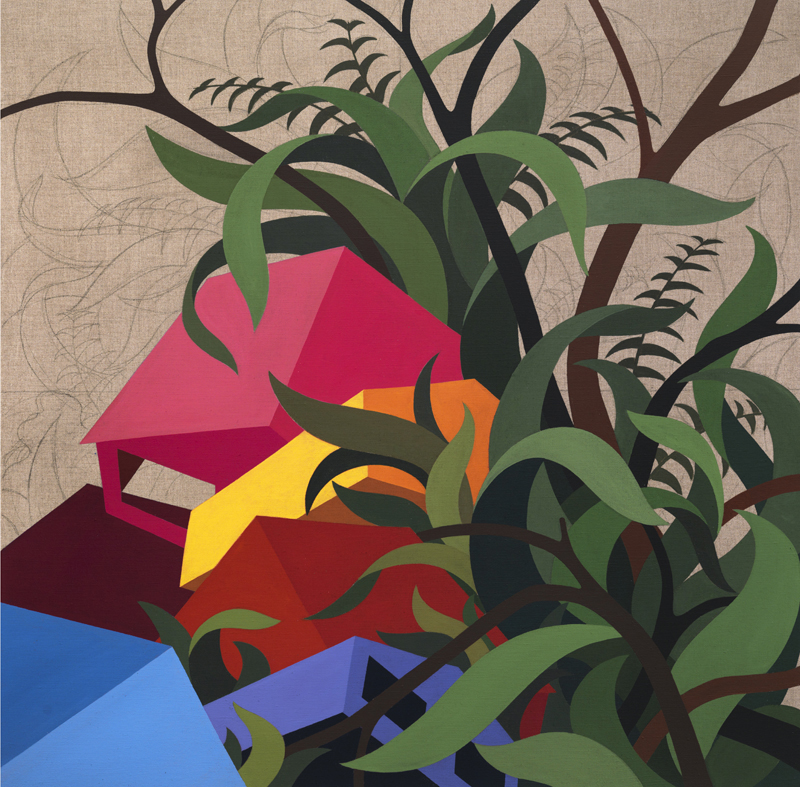 Probably the closest analogy to Kath’s imagery would be the post-hurricane / post-tsunami chaos. Just like in the documentary images we see on the news, where houses, buses, large structures are seen floating miles off shore, and whole towns are submerged in the dense black waters. Eske Kath’s paintings are at once bold and fragile and seem to transport you into a different world.

In this exhibition, Eske shifts the role of destructor from Nature to Mankind himself and asks interesting questions about the durability of human civilization and the artist’s role and culpability as a member of that civilization. Eske’s preoccupation with catastrophe echoes the images that circulate frequently in global media today, and his work openly references topical events, such as the Deepwater Horizon disaster in the Gulf of Mexico from earlier in 2010. 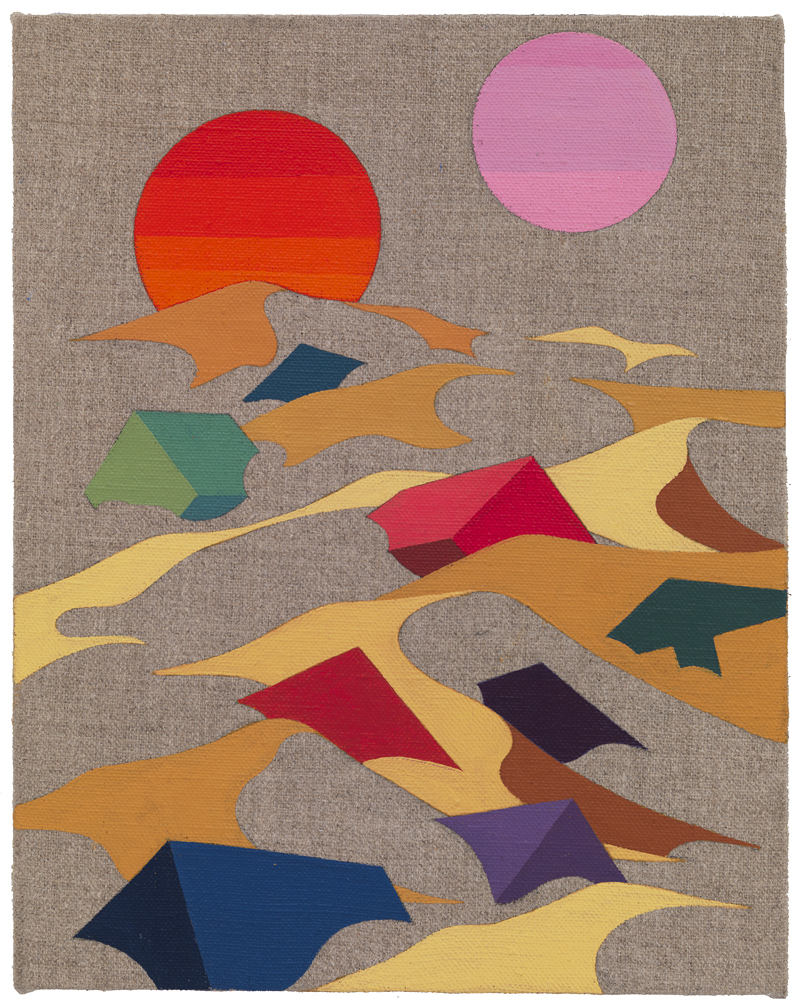 We first discovered this Danish artist during the annual 2014 Bushwick Open Studios. His latest exhibition at Charlie James Gallery in Los Angeles showcases most of the works we saw back in Spring along several new additions. 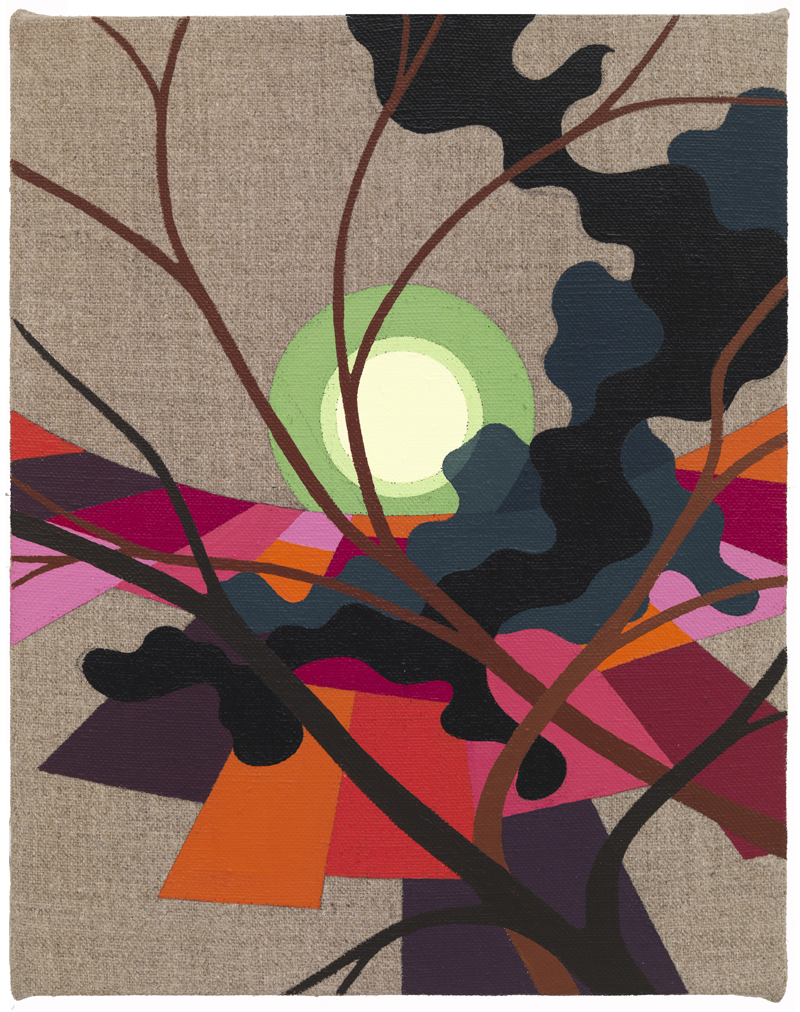 Eske Kath (b. 1975, Denmark) studied at the Royal Academy of Fine Artist in Copenhagen, DK, graduating in 2003. In 2009, Kath was commissioned to paint a chamber ceiling in the Crown Prince of Denmark’s Amalienborg Palace. Kath’s work has been exhibited internationally, including Denmark, Berlin, New York, Los Angeles, Oslo, Frankfurt and Vienna. He is represented by Galerie Mikael Andersen in Copenhagen and Berlin, by Judith Charles Gallery in New York, and by Charlie James Gallery in Los Angeles. Kath lives and works in Brooklyn, NY.

This article ©galleryIntell. Images provided courtesy of the artist and the Charlie James Gallery, Los Angeles.