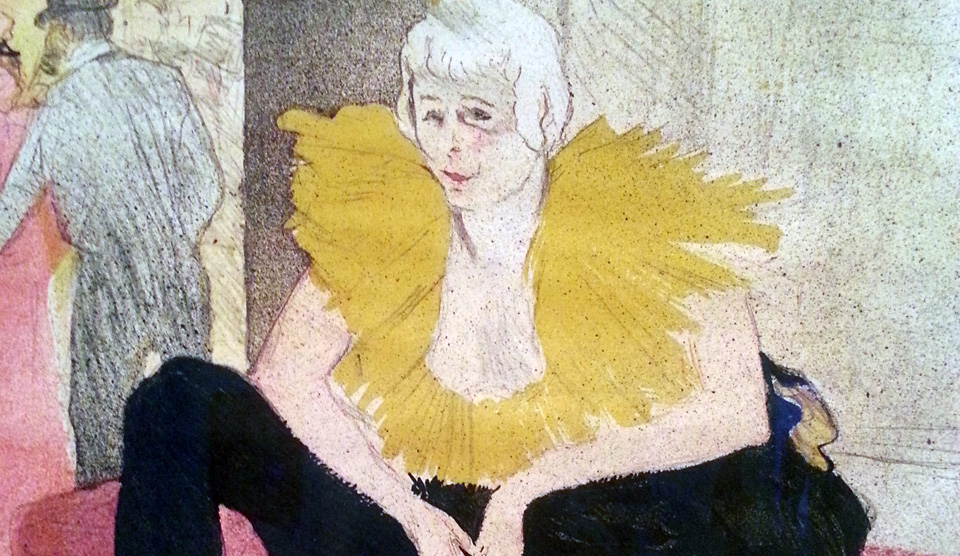 Home › Articles › Exhibition Recommendations › The Paris of Toulouse-Lautrec: Prints and Posters at MoMA

The Paris of Toulouse-Lautrec: Prints and Posters at MoMA

Crowds rushing to the Henri Matisse exhibit at the Museum of Modern Art in New York are sure to miss the compact showing of the famous Frenchman’s billboards and intimate sketches of the Paris Belle Epoque night life. Many of the lithographs and posters are well-known to aficionados and poster shop regulars, but some are sure to be welcome discoveries. 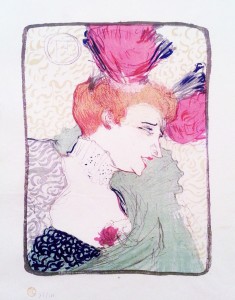 Among the better known images is the famous Jane Avril, shown in her snake dress, bending backwards with her arm flailing, as she sings. There too is the chapeau-ed comedian and nightclub owner, Aristide Bruant as he looks onward in his signature red scarf. The famous clowness Cha-U-Khao shares the room with perhaps, the lesser-known portrait of Marcelle Lender, whom Lautrec has seen some twenty times in a revival of the 1895 operetta Choleric. When Lautrec’s friend asked about the apparent attraction to the singer, Lautrec reportedly replied: “I only come to see Lender’s back. Look carefully, you will rarely see anything as splendid.” The profile portrait, among many other examples in this exhibition, was a gift of Abby Aldrich Rockefeller.

Did you know that Toulouse-Lautrec invented a technique known as crachis – a splatter achieved by raking the ink-laden bristles of a toothbrush. The effect gives a soft airbrushing effect and can be seen on a number of lithographs in the exhibition.

Pencil drawings of May Belfort and Sarah Bernhardt, the mainstays of the Parisian entertainment elite, also installed in the same room, are part of a series of lithographs titled Portraits of Actors and Actresses from 1898.

Further in is, perhaps, one of my favorite exhibits, an almost abstract and very fluid portrait of one Loie Fuller, an American dancer most notable for her  contributions to modern dance and innovations in stage lighting. You may recall that fantastic old film of a woman in a voluminous silk dress that appears to change colors as she dances. That was Fuller doing her famous “fire” dance. 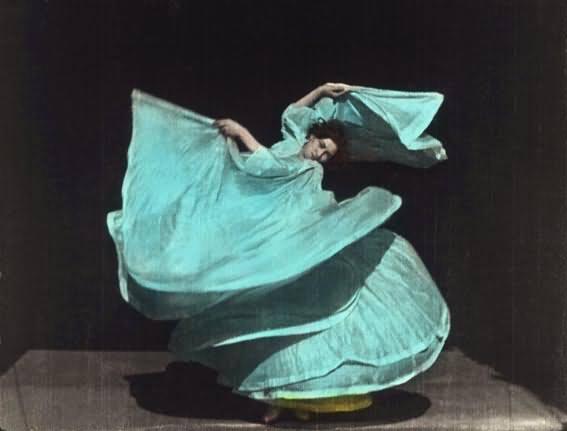 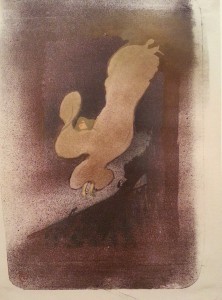 Richard Nelson Current and Marcia Ewing Current wrote about Fuller: “she broke the mold of traditional choreography and prepared the way for the development of modern dance. She helped to launch other pioneers, among them Isadora Duncan. A “magician of light,” she made important contributions to stage lighting and lesser ones to cinema techniques. She became the personification of Art Nouveau, the inspiration for artists who, idealizing her, portrayed her more often than any other woman of her time. She, in turn, promoted the work of her artist friends and was responsible for the founding of two art museums. An inspiration for poets as well as artists, she served as a symbol of the symbolist movement.” 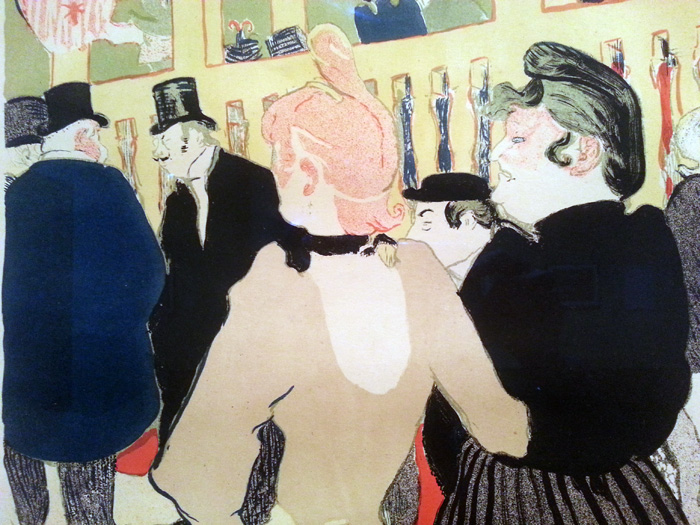 At the Moulin Rouge, La Goulou and Her Sister, 1894 Detail, Toulouse-Lautrec, MoMA

La Goulou (The Glutton), another of Toulouse-Lautrec’s famous female entertainers was so well-known at the time that the artist didn’t even have to show her en-face. Born Louise Weber, the ambitious country laundress became famous as much for dancing the cancan as for her insatiable appetite for life and food. She aggressively sought fame, dancing in transparent muslin pantaloons and posing topless for publicity photos. Her costume consisted of a low cut gown, a much-copied hair style and a black ribbon chocker. Here Lautrec echoes the traditional Japanese ukiyo-e woodcuts where the subject is often defined by gestures, hairstyles or signature accessories rather than an exact likeness.

“This exhibition, drawn almost exclusively from The Museum of Modern Art’s stellar collection of posters, lithographs, printed ephemera, and illustrated books, is the first MoMA exhibition in 30 years dedicated solely to Lautrec, and features over 100 examples of the best-known works created during the apex of his career.” — MoMA, The Paris of Toulouse-Lautrec: Prints and Posters