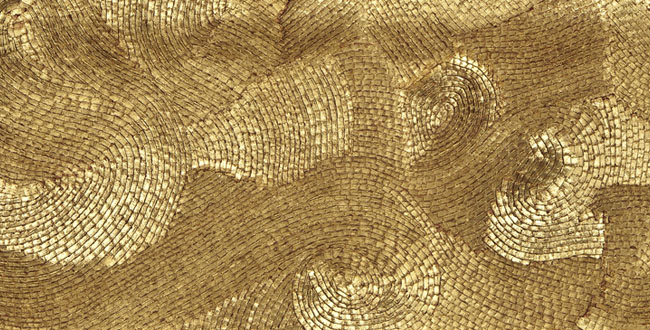 Recalling the golden kaleidoscope of Klimt’s ‘Adele Bloch-Bauer I’ or his ‘Tree of Life’, Olga de Amaral’s works read like intricate tapestries, embroidered and woven from lush, golden threads, moving in unison. These wildly tactile creations rise from the two-dimensional surfaces upon which they hang, suspended in motion. Exhibits in this show range from concise horizontal compositions of strong, tense currents and undercurrents, to open, almost trailing thoughts framed in looser medallions and waves. Amaral’s painted, gold and silver-leafed, cut, torn and woven canvas are shown alongside sensual fiber sculptures that punctuate the space. Gold, black and Yves-Klein-blue – they are suspended from the ceiling in a thick knot, pooling on the floor.
– galleryIntell

From the Nohra Haime Gallery –

Olga de Amaral first exhibited her “golden surfaces of light” at the André Emmerich’s New York gallery in 1973. Her work plays a unique balancing act between fine art and fiber art. Gold has become a formal part of her vocabulary and renders her work collectively recognizable.

Methodically assembled with a myriad of rectangular pre-fabricated pieces of fiber made into strips and rolls, the artist recreates the inner world of the universe.  The compositions are a labyrinth of winding, swirling and twisting interwoven patterns. Wind, light, mountains, trees, and rivers take heroic grandeur in her exploration of the universe.

Departing from the static world of the two-dimensional surface, she conceives monochromatic environments of shimmering presence and seductive forms. She weaves, cuts, molds, marks and tints her materials, fusing and merging them to create a tension that redefines the natural order of things. Their content is only revealed upon close examination, and “just when we think we have it in our grasp, defined and categorized, it slips away, taking on another shape,” describes art historian, Twylene Moyer.

Born in Bogotá, Colombia, Olga de Amaral studied at the Cranbrook Academy of Art. During the 1960s, Amaral played an important role in transforming traditional two-dimensional textiles into sculptural works of art. In 1973 she was awarded the Guggenheim Fellowship, and in 2005 she was selected as a Visionary Artist by the Museum of Art and Design in New York, an award that celebrates her commitment to the highest quality.  She is represented in the collections of over 40 museums worldwide including the Museum of Modern Art and the Metropolitan Museum of Art in New York.

“Olga de Amaral: Places” is on view at the Nohra Haime Gallery  now through October 31, 2012