Photograms have been around for more than a hundred years. Man Ray famously created his rayographs as he experimented with paper and light at the turn of the 20th century when, during the birth of the surrealist movement, artists began to expand the boundaries of fine art. They invented new approaches to familiar media, new ways of manipulating traditional materials and new ways of using technology. Artists like Pablo Picasso, László Moholy-Nagy, Christian Schad (who called them “Schadographs”), Imogen Cunningham and others experimented with this cameraless photography technique that involves placing objects directly onto light sensitive surfaces (like photographic paper) and then exposing the paper to light. Photography, in all its iterations, was in the process of being reclassified as a fine art medium.

New York City-based artist Adam Fuss, represented at the ADAA’s The Art Show by Cheim & Read talked about his captivating abstractions and the inspiration behind his work. In this interview we learned more about his own process creating photograms, his emotional inspirations and the role of love and longing in his gestural compositions. 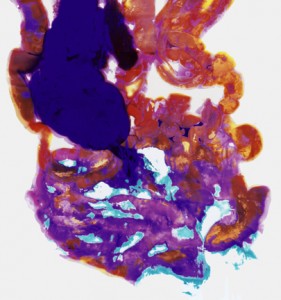 Adam Fuss: “Photogram” is a catchall phrase that describes photographic works that are made without a camera. In this case, I laid objects directly on the photographic paper, and exposed the paper and the objects to light. 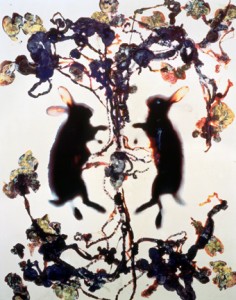 These pictures come out of a work called Love, which is a picture of two rabbits with their intestines mixed together. I think, by that I was trying to express multiple different thoughts and feelings. One of them was the idea of having figurative art and abstract art mixed together in the same picture. An effort for there to be a meaning and a sense of figuration and abstraction, together at the same time.

This interview © galleryIntell. Artwork © Adam Fuss, and courtesy of the artist and Cheim & Read, New York.