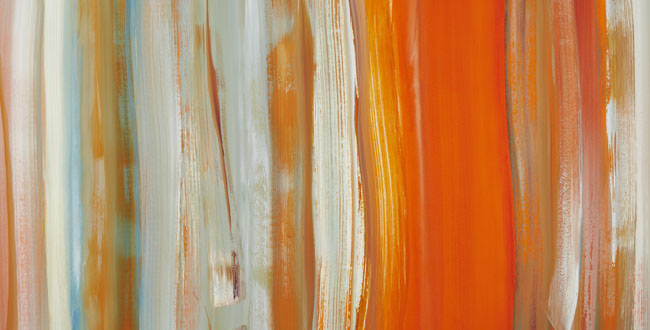 Willy and I met many years ago when a budding young painter, I ventured deep out into Brooklyn to buy stretcher bars from his studio. It was a random ad on Craigslist that brought me to a ground floor garage space on Myrtle Ave and into the very first real artist studio. 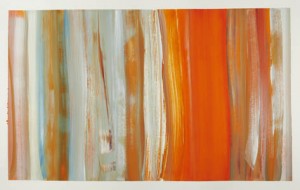 I remember feeling instantly awed by the perfect fluidity of color streaming down the canvas in soft vertical bands. Orange flowed next to the most brilliant turquoise, next to a deep alizarin crimson, next to a Naples yellow and all these colors seemed to be destined to exist in this very harmony, in this very space. There is a saying in Russian “Все гениальное – просто”, which roughly translates to all the ingenious things are in reality quite simple and this is how Willy’s work felt to me. It was perfectly simple, yet impossible  for anyone but him to have conceived and expressed. Over the years we have kept in touch and finally met up again in New York in anticipation of the “Watercolors“ exhibition at Phillips de Pury in Chelsea where several of Willy’s new works are installed in their very own room.

I’ve asked Willy to talk about his process and the paintings in this exhibition as I believe that in abstract art, understanding the artist’s physical process, his thought process and inspiration is an integral part of understanding the painting itself. What is it about the outside world or the inside space that brings out this line or this stain, or this field of color? How do thoughts and intentions come to life?

Here is how this artist described his process: 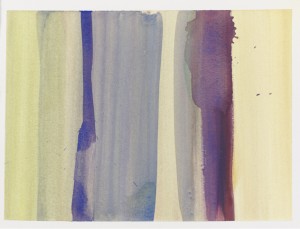 “I generally paint with watercolors while travelling. I spent a few weeks on the island of Lolland Denmark around the summer solstice a few years ago. I painted during the golden hour, which stretched out luxuriously for hours on wheat fields that turned from green to gold over the time I was there. So what became relevant and beautiful about those watercolors was that they were a little piece of that place. North West  Corridor is the only example of this type of work in the exhibition. Those types of paintings are not a reference for other works, or a sketch for a grander idea. They are complete works unto themselves. They reflect a particular environment and circumstances. When I’m in the studio, my paintings are not about capturing an environment, but an attempt to approximate my self. They are more like impersonal journal entries than they are reflections of a place. When I paint with oil, I set up a ritual – It’s a repetition and performance. 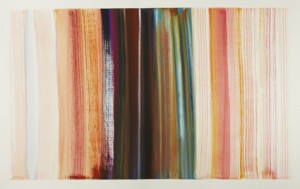 What I wanted to do in this new series, was to take the watercolor medium to my studio environment. I found myself laying out my colors and handling the paint in the way that I would oil paintings. I really pushed the limits of the watercolor medium. For example, one “normally” lets the white of the paper show brightness, but I was using an entire tube of white watercolor paint to show my brightness. Of course the medium has its own intrinsic value and I wanted to make use of that, but I also wanted to push it in this new direction.”

What’s interesting about this body of work is that Willy manipulated the medium to make it mimic oil paints. As you compare his monumental oil paintings with these watercolors, you can see that this, most unforgiving, medium has been tamed into plasticity practically identical to oil. There is none of the expected fragility and romanticism of watercolor here, his color is confident and the brushstroke is clearly present. It’s an integral element of the painting. Willy essentially took the “water” out of the medium and just left the “color”.

The “Watercolors“ show, curated by Kristin Sancken, Phillips de Pury and Annika Connor, Active Ideas Productions, features 92 watercolors by a diverse group of artists and includes such heavyweights of the art world as Eric Fischl. The show’s breadth is impressive as it attempts to examine the perception of watercolor as a fine art medium and the issues of value (art historical, economic and aesthetic) surrounding the medium and its relationship to oils. The exhibition is held at Phillips de Pury’s Chelsea location until October 19, 2012.

All artwork © Willy Bo Richardson 2012 and featured in this article with the artist’s permission. This article © galleryIntell

Artwork featured in this article: