Two concurrent exhibitions at the Gagosian Gallery’s Chelsea locations show Richard Serra’s most recent sculptures and drawings. The 24 street gallery is showing three stelae compositions, each shown in its own enclosed space, and a room of signature Serra black oil drawings. Here are the Top 5 things you may not know about these amazing works.

Serra’s sculptures are inspired by music, poetry and literature

It’s no secret that artists often inspire other artists. Novels are inspired by music, fashion designers and chefs are inspired by paintings (if you haven’t seen Dior and I, you simply must watch it), and visual artists are often inspired by music and literature. The resulting works are the artists’ interpretations, so you probably won’t see a literal reference to the original. You might in some instances, but more often than not, the derivative is a reflection, the ‘after’, or a ‘process’ of the original. It is the artist’s emotional response to the source material. It could be a reflection on the expressed feeling of elation, loss or solitude. It could be reference of the visual or narrative intensity of the original, a single thought, a question, a statement that permeates throughout the primary work. Richard Serra is one of those visual artists whose work is influenced by other artists: musicians and poets and he reflects and interprets their intentions through his own technique and materials. 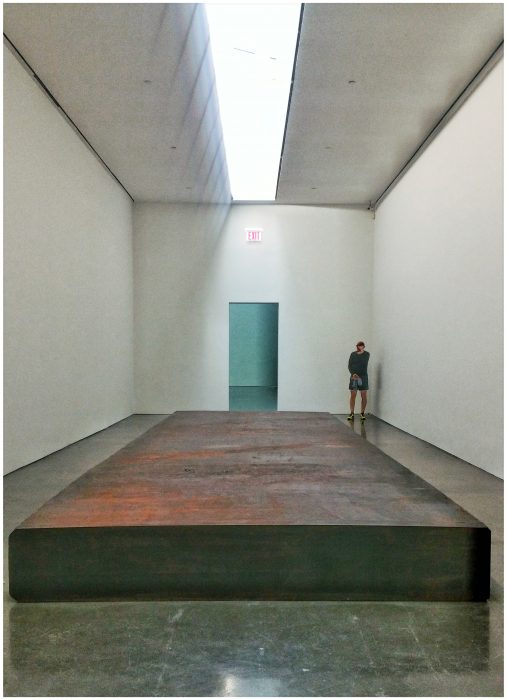 One obvious homage is shown above. The sculpture, titled ‘Silence (for John Cage)’, is a single slab of forged COR-TEN steel measuring 16″ x 29’6″ x 9’2″. It is the visual embodiment of Cage’s minimal approach to sound and composition. In an earlier exhibition, a similar sculpture, titled Fernando Pessoa, was shown in London in 2009. Also consisting of a single slab of forged steel, it was installed vertically, slicing the room into two even spaces.

“I recently read Pessoa’s The Book of Disquiet [which was written in the 1920s but first published in 1982]. In it Pessoa constantly probes his thought and analyses his personal sensations. The book is made up of fragments by a writer who is obsessed with his own emotions. His voice is one of unsparing introspection. The questions he asks over and over again are: ‘Who am I?’ and ‘Why do I write?’ By extension, I find myself asking: ‘Why do I make what I do?’ The same probably held true for Rothko. For Pessoa, to think is to live and to feel is merely food for thought.”  – from Void Manufacturing’s interview with Serra

Serra works from ‘inside – out’

Art is often a product of innovation. Innovation of vision, tools, techniques, or processes that are necessary for the artists to better understand the intention, better see the material and communicate with the audience. What’s remarkable about Serra is not only the scale of his works and the diversity of materials he’s used over the last several decades to exercise his thoughts, but that he works from ‘inside – out’. Using a simple ‘wheel’ structure that he invented to determine the interior volume inside each one of his Torqued Sphers and Ellipses, Serra was able to create his tornado-like shapes that force you to re-assess the very notion of verticality, stability and mass.

Don’t worry about the ‘meaning of it all’, just walk!

Sometimes the most important part of art is you. That means that Serra’s sculptures are as much about the material, form, and scale, as they are about how you move through them, your point of view and perspective. What you feel while looking at them, being in front of them, or, as is the case of Richard Serra’s sculptures, inside them. Serra said this about his works: “… if I had to give a brief on what I thought sculpture needed to be, it was to do away with the object, to get sculpture off the pedestal and expand the space of the field, to open up the container and to foreground time and bodily movement in relation to the intensity of place and context.” To paraphrase Jerry Maguire, you complete them!  So, forget your daily routines, abandon your expectations, instead open your mind, breathe deeply, and just take in the beauty of Serra’s creations.

Yes, both the Brooklyn arena and these stunning sculptures are made using a special type of steel called Cor-Ten steel, which has been treated to make it ‘weatherproof’. The chemical process through which it’s created allows the steel to sustain different types of weather and not crumble over time. Once the steel is treated and the protective layer forms on the surface, it may take up to 10 years for the final color and rust patterns to set it. The current exhibitions feature works ranging in color from a graphite slate gray to a warm orange rust. 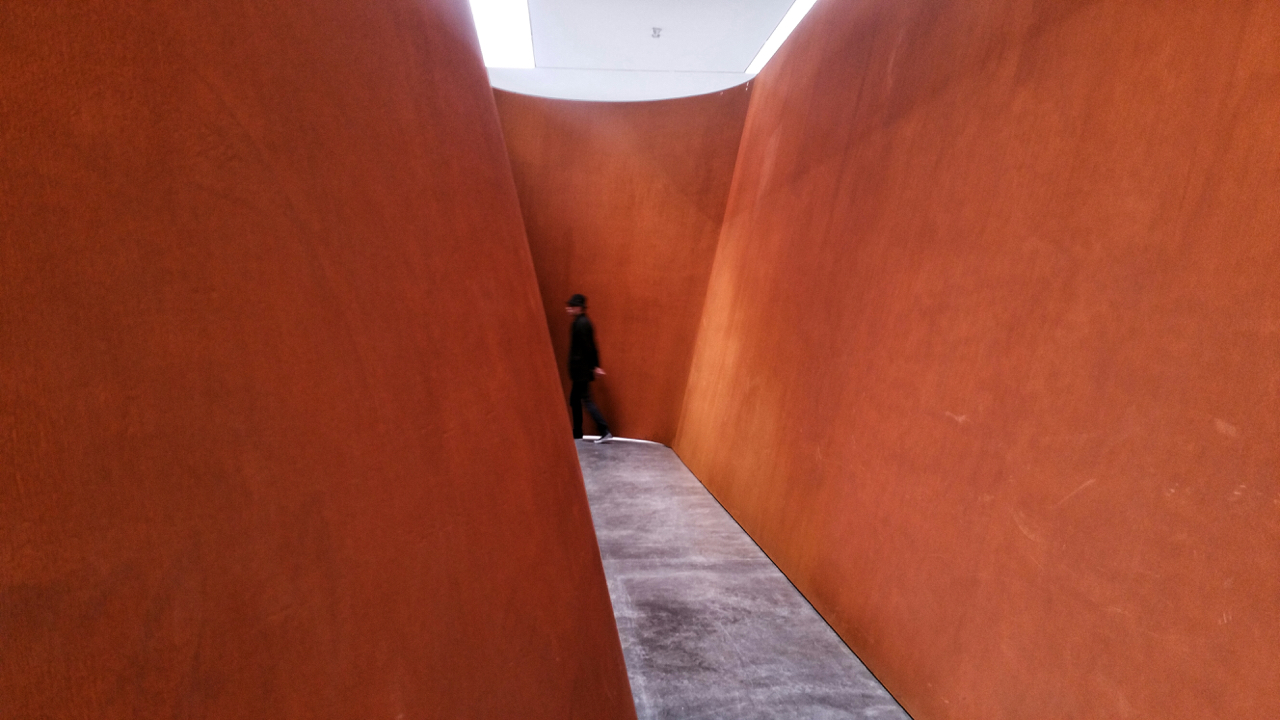 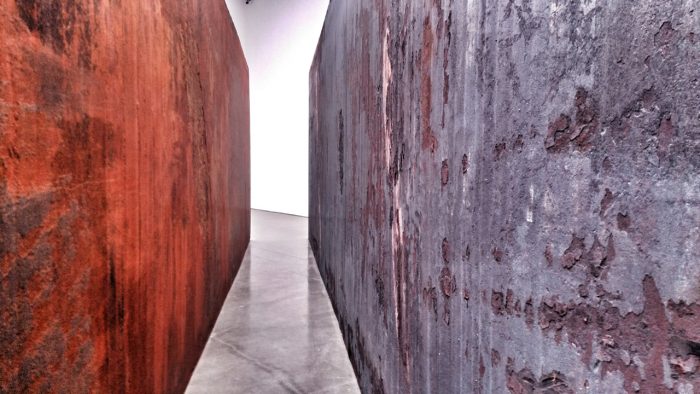 If you ever had a chance to walk through Antelope Canyon in Northern Arizona, you’ll feel a sense of familiarity the instant you enter ‘NJ-1’. That realization of constantly changing space, light, color, volume, and your own mass in relationship to the walls of the canyon, is the same as when you interact with a Serra sculpture. This applies more to his ‘torqued’ sculptures than the stelae, where each step brings with it a new sensation of self, who you are, and where you are in relation to your surroundings, and the volume of space around you. ‘NJ-1’, on view at the 21st street gallery provides a single, perhaps even a less ‘democratic’ point of entry that then opens up into two maze-like corridors that in turn wrap around the interior U-shaped tilted sleeve. Take your time and meander through each side, taking in all the subtle shifts in color, surface, light, and what space feels like around you.