There is so much force condensed inside Charles McGill’s large scale Tondos, on view at Pavel Zoubok Gallery in Chelsea, that you can’t help but be mesmerized by these frieze-like sculptures. The tondos (from the Italian rotondo – round), totems and smaller free-standing sculptures are created by re-assembling golf bags that have been torn, cut apart, pulled in all directions, collaged and made to comply with the artist’s will. 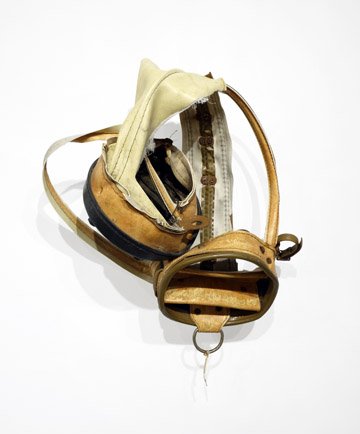 And there are so many layers of contradictions contained within these sculptures. There are surfaces that appear to be soft and pliable, but are neither and as soon as you make that discovery, you see stiff plastic tubing crushed into submission, zippers glaring in cold indifference, screws, nails, brads and other metals piercing the leather in the most violent ways. Expectations of calm dictated by the circular, halo-like shape of McGill’s tondos instead reveal hurricanes brewing inside each one. So much so, that these sculptures are still vibrating with the artist’s determination of making the materials conform to his will.

‘Target 51’, ‘Territories’, ‘Little Indian’, ‘White (Tondo)’, ‘Scull’, ‘Goat, Bull, Rooster, Horse’, (don’t you just love the titles?) along with every other work in this exhibition, were born without studies, without plans, without the slightest notion of their final states. For Charles McGill the process is fundamentally intuitive. There is a need to create and because of this need he allows the materials to guide him, but theirs is not a passive relationship. A “tug-of-war” is how he described it when we sat down to discuss the exhibition and his creative process.

Charles McGill: I don’t think there is real symbolism for me with the circle, however, there is a compositional challenge within a circle that I’ve always kind of been interested in. 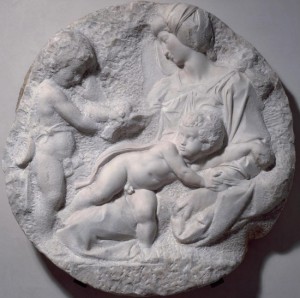 The first one I did was the white tondo and I didn’t really know what to think about it, and I sent it to a friend of mine in California, Joe Lewis, who is an artist also and he sent me back a Michelangelo tondo, which was strikingly similar to the one I had just made. And it really blew my mind and gave me an affirmation that this was probably a good direction to go in.

I’ve been working with the golf bag material for several years. It’s a material that seems to not want to cooperate with my intentions for it. So in that process there is a lot of tug-of-war. A lot of wrestling, a lot of stress and emotions spent. In that process comes something that I don’t expect as a result. But when I am finished, I am, most of the times, happy with the results I have achieved.

Taking a vessel, if you will, and an object that is meant for leisure and the kind of emotion I spend with that material is the exact opposite of the emotion you would carry out on to the golf course.

The fact that these golf bags are manufactured to be durable, to have longevity, to stay together and not come apart, those elements of that material are the thing that kind of a catalyst for me. If they came apart easier, I don’t know that I would get the same work. 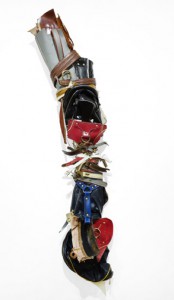 Certainly, Philip Guston. I wouldn’t say he is a direct influence, but it’s certainly hard not to make that connection if you have a hooded figure, so I do look at him from time to time. And of course Michelangelo and Nancy Grossman. I can’t say enough about her work. I’ve never been that familiar with her work in terms of a studied relationship with it, until very recently. I’m almost kind of ashamed to say that, but as I look at her work, the kinship with the way she worked with leather and or vinyl, and the way she incorporated zippers, and the way she manipulated the material to do what she wanted it to do, I really identify with that process.

I don’t remember the name of the piece, it might have been during a Google search, when a piece popped up. A vertical piece that I have never really seen from [John] Chamberlain popped up and it made a stunningly immediate influence or, impact I should say. I didn’t want to look at it too long, I didn’t want to sear into my brain, but I was aware of its impact and I thought, I understand what he is doing there with that material and I want to know if I can “translate” that with my own materials.

I let it sit for a couple of weeks and. I got a piece of wood and I just said, I’m going to make an attempt to visit that place. Because I really understood the language and having never seen that piece before I wanted to know, can I converse in that language? I started and I made “Corset ”, which I love. 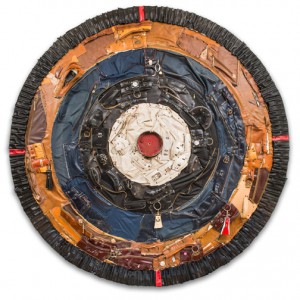 Target 51 is probably the most personal piece in the show. It’s about my father dying at age 51. He died at 51 when I was 30, so for the last 21 years I have been kind of aware of this age out in front of me.  This “target age” in front of me that I wanted to get to. …. When he died I automatically thought and continued to think for the next 21 years that maybe something will strike me down at age 50 – 51 and I wouldn’t live that long. So when I had my birthday in January, I made it to age 51.

The physicality of actually making the work really is the over-riding characteristic of the work, I think.  If the materials were easier to handle, I don’t know that I would get the same result. A lot of what happens in the work is the direct result of how frustrating it is to work with the material.

I have to say, I rarely know what’s next. Working with this golf bag, or working with this material for the last 15 years, at each stage I thought, ok, that’s it, I’ve exhausted it, I can’t really do anything more with this material. At each stage something else revealed itself, so in a sense I’ve kind of let the material guide me as to where it might want to go next. At the same time I’m coercing it to do what I want it to do. It’s a tug-of-war, it’s a wrestling match. I really would not have it any other way. As frustrating as it can be to make the work, those are my ideal conditions. I don’t want serenity.