The auction house just announced that Alberto Giacometti’s iconic Chariot and Amedeo Modigliani’s Tête will lead the November 4 evening sale, alongside works by Hans Arp, Marino Marini, Joan Miró, Henry Moore and Barbara Hepworth. Sotheby’s is placing quite a bit of emphasis on this rare Modigliani work estimating it to sell around $45 million, during the November 4th Evening Sale. 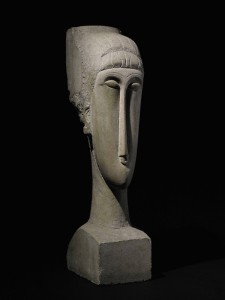 ‘‘Modigliani’s Têtes rank among the most revered sculptures of the 20th century. Working alongside Constantin Brancusi, he believed that direct carving and staying true to materials were critical if sculpture was to be reborn for the Modern age. The present Tête has a truly mesmerizing aura, and is recognized to be the greatest Modigliani sculpture in private hands.’

Modigliani’s Têtes reflect his devotional mania for carving, or the liberation of form from a block of stone. The artist believed that the practice of modeling had tainted this art, particularly the work and influence of Auguste Rodin. His passionate avowal of direct carving is especially evident in the richly varied surface texture of the present Tête, which displays an expressive handling that emphasizes his creative process.”  — Simon Shaw, Co-Head of Sotheby’s Worldwide Impressionist & Modern Art Department.

The Tête was created in 1911-12 from a single block of limestone known as pierre d’Euville, a porous rock quarried in eastern France that Modigliani took away from construction sites around Paris — including work site of the Paris Metro and brought to the studio he shared with Constantin Brancusi. 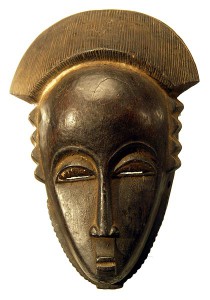 The principal influence in this work are the Baule masks from the Ivory Coast that Modigliani had seen alongside the Congolese fetish objects at the Musée du Trocadéro. The sculpture was exhibited at the Paris Salon d’Automne of 1912 in the famous Salle des Cubistes, a landmark exhibition in the history of modern art. His sculptures were displayed alongside Cubist works by the pioneers including Fernand Léger and František Kupka, and “offered a sensual alternative to the more severe, geometrical works of his contemporaries.”

This work has an illustrious provenance. It was first purchased directly from Modigliani by the celebrated British artist Augustus John and through another owner came to a private collection in Belgium.  Today, the Modigliani Tête is one of the rare stone carvings to remain in private hands.

The work has never been offered at auction and will in Sotheby’s York Avenue headquarters beginning 31 October.