Trevor Paglen looks back at the NSA at Metro Pictures

It’s been 14 years since September 11th. Fourteen years of unprecedented surveillance and data retention that often, and for the most part, goes unreported, unprocessed and unseen by the public at large. But since the details of the vast information collection initiatives by government agencies started to come to the surface, many artists took up the issue as the focus of their work and addressed it through their respective media. Hasan Elahi, an artist whose name was mistakenly added to the US Government’s watch list, and who was advised to inform the FBI on his location, flooded the agency with more data than they asked for or could handle.

“Starting with constant phone calls and emails to the FBI to notify them of his whereabouts, what started as a practicality grew into an open-ended art project. He began posting photos of his minute-by-minute life, up to around a hundred a day, on TrackingTransience.net – hotel rooms, train stations, airports, meals, beds, receipts, even toilets – generating tens of thousands of images in the last several years. Just for good measure, he also wears a GPS device that tracks his movements on his site’s live Google map. And as if to prove his point that “the best way to protect privacy is to give it away,” Elahi – while still being watched by the authorities, according to server records – hasn’t been bothered since.” – TED.com 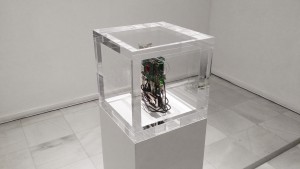 Another artist, 41-year-old American Trevor Paglen looks at the objects and infrastructure that allows the NSA to conduct its data collection. The installation at Metro Pictures features large scale photographs paired with detailed annotated maps, and a separate video installation of covert surveillance locations along with something called Autonomy Cube (right), created in collaboration with digital civil rights activist Jacob Appelbaum.

The sculpture “is a secure Wi-Fi hotspot that offers visitors an opportunity to communicate beyond the reach of the surveillance system. Computer mainboards housed inside a thick transparent cube are programmed to route traffic over the Tor Network—an international web of anonymous servers that forms a secure data sharing system that intelligence agencies have found immensely difficult to surveil.“— Metro Pictures

Paglen, who holds a Ph.D. in Geography from UC Berkley, and an M.F.A. from the Art Institute of Chicago, focuses his [telephoto] lens on switch and cell towers, submerged transoceanic cables, mountains, valleys, filed of giant white spheres straight out of Jody Foster’s Contact, fenced, unmarked yet heavily guarded landscapes, that bizarre AT&T building at 33 Thomas Street in Downtown Manhattan, just a couple of blocks from Ground Zero… and photographs of wide open skies. Just expanses of sky at different times of day which, when seen in this context, make you shiver.

Paglen’s most recent works include shimmering photographic views of bucolic shorelines coupled with collages of maritime maps and documents pointing to their status as NSA-tapped telecommunications cable “choke points.” The seemingly benign looking seascapes depict some of the NSA’s most controversial surveillance activities. In another series Paglen learned scuba diving and underwater navigation, venturing to the ocean floor to photograph undersea cables that top-secret documents show are tapped by the NSA. These undersea photographs, composed of deep blue and green color fields punctuated by the unnatural presence of internet cables, are meditations on vision, form, representation and the material networks that invisibly shape our world. 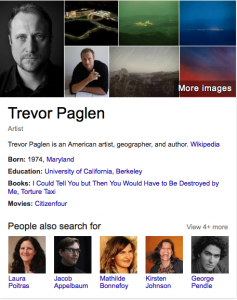 The spatially punctuated exhibition at Metro Pictures in Chelsea stops the wandering visitors with the first diptych. Is it the juxtaposition of the unobstructed land and seascapes with the detailed and illustrated maps? Or is it the sudden realization of the difference between the gravity of what Paglen is showing us in the rest of the exhibitions on that block? Probably both, because as soon as you realize what those transcendently abstract photographs are actually showing you and how they relate to the maps, you can’t help but feel the weight and scope of what the artist is showing you.

The video installation, which is shown with location sound is just as chilling. This is an exhibition that must be seen. It must be considered and absorbed.

And one last thing. What I found especially interesting about Trevor Paglen is that when you Google his name, the search engine shows you suggestions not for other artists, as its algorithm typically does, but it shows you Laura Poitras, Jacob Appelbaum and other civil rights activists.