In this installment of our interview focused on non-objective abstraction, a visual language chosen by Alma Thomas, Beauford Delaney, Charles, Alston, Sam Gilliam, Harold Cousins and other African American abstract artists of the so-called “first generation.” We also talked to Michael Rosenfeld about the collecting trends for African American art and the recent interest from major museums and private collectors.

galleryIntell: What are some of the dominant themes in African American abstract art? And are they completely unique or is there shared ground with some of the themes explored by the AbEx artists?

Michael Rosenfeld: Beauford Delaney is a little different than [Hale] Woodruff and [Charles] Alston in the sense that his work becomes completely non-objective. Delaney had a very profound experience in the early 1920’s when he was in Boston and he saw an exhibition of Monet’s Water Lily paintings. For him, the idea of light and water, and abstraction became the essence of his art. After he left the United States in 1953 and moved to Paris, where other Americans had also gone after the war, he suddenly had the courage, one might say, to abandon representational imagery and to let light and rhythms take over his work. And his work really becomes completely non-objective. It’s about gestures of color. And there really isn’t the sense of his African American identity. And the same holds true for Alma Thomas, whose abstractions are also rooted in nature.

Norman Lewis was the only artist who really sat at the table, so to speak. Occasionally one will see, there are some famous photographs of some of the Abstract Expressionists meeting in the early 1950’s. And there’s one man with dark skin sitting at the table, and that’s Norman Lewis.

Watch part I of our interview with Michael Rosenfeld here.

GI: In terms of collectibility, who are the most sought after names in African American modern art and who are the under-appreciated masters we should pay closer attention to? 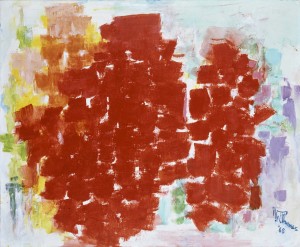 MR: Of this group of abstract artists, there certainly has been a slow, steady, if you want to call it, snowballing growth of interest and market in Alma Thomas, Beauford Delaney and Norman Lewis. There’s no question that in those three artists we’ve seen the markets evolve significantly in the past ten years and the growth of interest, again there really is sort of a snowballing effect, there’s much more interest now than there was a year ago. And next year, I anticipate there will be that much more interest and with acquisitions by museums and collectors from around the country and with inquiries and collecting abroad as well.

Their markets are not quite as strong whereas major paintings by Woodruff and Alston, very, very major paintings can be $75,000 to $250,000.  Major paintings by Norman Lewis, Beauford Delaney and Alma Thomas can be several hundred thousand dollars for the very, very best and the largest and the finest quality. With that being said, that is quite a difference between the top market for Jackson Pollock and Rothko and other abstract expressionists. But, we’ve also seen though, in the past decade, we’ve seen certain artists like Joan Mitchell and like Lee Krasner, we’ve seen them evolve tremendously in the market and appreciation for their art, as artists as well. I think they go hand in hand and I anticipate that we’ll continue to see that kind of growth of awareness and probably the growth of the market for all of the artists that we’re discussing.

GI: Where are the young collectors focusing their attention? Have you noticed a particular trend or a preference for Modern vs. Contemporary art?

MR: The market was very active with historic African American artists including the Abstract Expressionists, if we want to call it, the first generation of African American abstract artists. The market was very active with younger collectors fifteen years ago to around five years ago. And interestingly, we saw many young collectors shift their interests to contemporary artists. 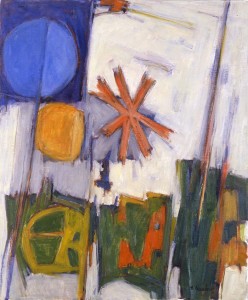 However, the last two years or so, we’ve seen a dramatic return in interest from young collectors and museums to collecting this generation of African American artists that serve very much as the mentors to the contemporary artists, and as many collections, institutions, private collections… many have collected contemporary art. They’ve become very interested in what preceded them. We’ve had that same experience also with young artists. There are many young artists who have become very successful. They’re also very interested in looking at, and learning, and even collecting the history of African American art. So, we’ve seen this return, which is very exciting.

Images in the video and the article provided courtesy of the Michael Rosenfeld Gallery and are used with permission. This article ©galleryIntell