Or how an old man predicted the price 4 days earlier

On Friday, November 8th, when the Post-War and Contemporary lot exhibition was installed at Christie’s in Rockefeller Center and the auction house invited collectors to the preview, a strangely dressed older gentleman came right up to me, snapped a picture of the magnificent triptych, smiled and said: “It will sell for $150 million.” Yeah, ok, I thought, just throw out a number – any number, after all it’s New York and there are plenty of weirdoes around. Later that evening, during a conversion with Koji Inoue, Head of Evening Sales at Christie’s, I mentioned the odd man’s comment and we both laughed, Koji saying: “maybe he knows something we don’t.”

So, now it’s Tuesday night. The Bacon triptych Three Studies of Lucian Freud was moved up to sell much earlier in the evening and it’s now just seconds after the Christopher Wool black and white stenciled letters sell for $3.3 million and the star lot is up. At this point we’ve all memorized the previous sales record and have the three digits $86.9 million imprinted in our brains. An insane amount of money, really. The paintings are stunning and demand admiration, but the price remains surreal. 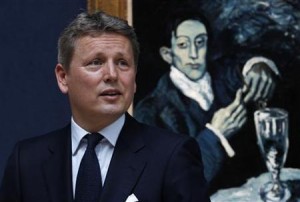 Jussi Pylkkanen, Head of Christie’s Europe and the evening’s auctioneer starts the bidding at a very symbolic number and the room reacts knowingly. $85 million. At this point any bid would now be higher than Sotheby’s record 5 years earlier. The auction house has spent quite a bit of time, effort and money promoting the painting globally, showing it to collectors in Moscow, London and Hong Kong before finally bringing it back to New York earlier this month. It is, by all accounts, a masterpiece and the collectors were sure to compete for it. Early on Larry Gagosian entered and left the bidding. Another gallerist followed suit, falling out of the bidding competition at $101 million, and the painting soon surpassed the $110 million mark. Ten minutes after the first bid the whole thing was over, history was made and the final bid triggered the hammer. It was the famed New York dealer William Acquavella bidding from a sky box above the main sales floor. Francis Bacon’s Three Studies of Lucian Freud sold for $127 million hammer price, and the room erupted in applause.

I quickly calculated the total sale price with the buyer premium – $142 million. And that’s when it hit me. The old man! Sure, he was off by a couple million, but $142 million (final price with Christie’s buyer premiums) was much closer to 150 than….86! I frantically tried to recall all of the details about the strange man in a worn-out jacket and scraggy beard. Could he have been the real buyer of the Bacon triptych? There are plenty of them in NY – those reclusive NY millionaires who leave their Park Avenue penthouses and wander the streets in ragged clothes, lunching on $8 sandwiches in diners and fishing out newspapers from garbage bins. Was he one of them? Did he really know something we didn’t? “How else could he have guessed the sale price so accurately”, I wondered out loud?

Of course, there is always “chance”.