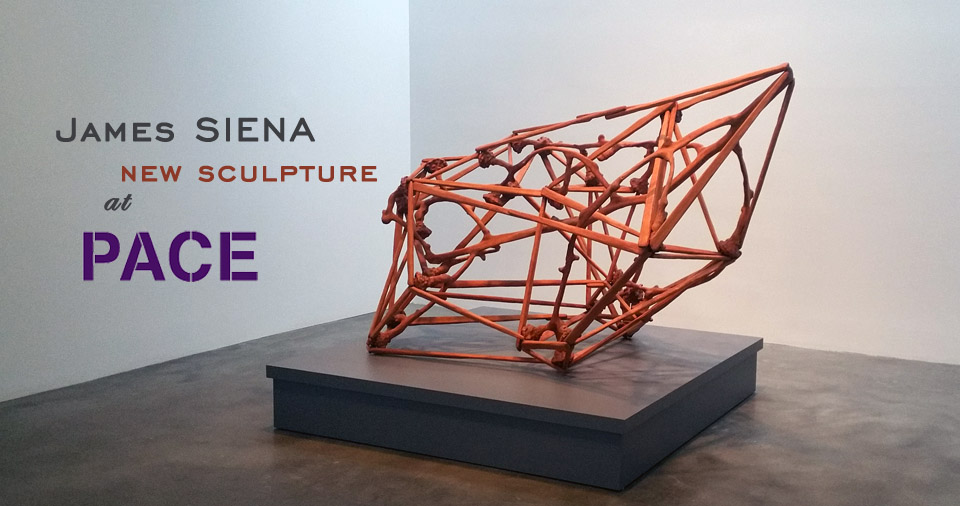 “In both the early toothpick and later fabricated iterations, Siena creates dynamic geometries through crisscrossing lines on both the exterior frame and interior of his sculptures. Lines condense into tight spaces and expand into apertures, incorporating the exhibition environment into the visual space of the work.”*

James Siena is probably best-known for his maze-like drawings and paintings where tightly spaced lines curve, trace and fold onto themselves, filling up the entire surface. Evolution in Siena’s work is evident through the presence of both, the organic and the geometric elements that defined his previous series. In the new sculptures, the artist presents them using a new medium that by definition implies existence of the added dimension.

Sculptures in the Pace exhibition are like three-dimensional puzzles constructed through a rigid sequence of steps dictated by self-imposed rules. Identifying the starting point and tracing the progression of each sequential step becomes part of this most gratifying experience. 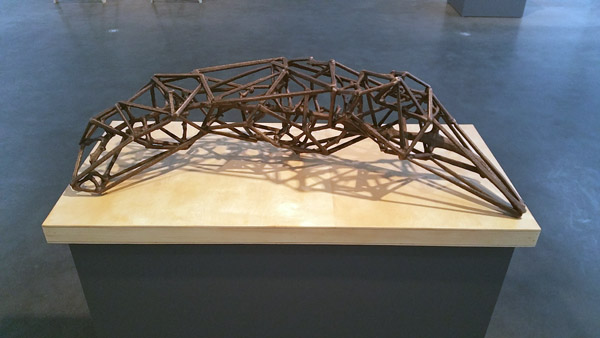 The large bronze exoskeletal constructions are mesmerizing not only because of their algorithmic complexity (mathematics permeates their every millimeter) but also because of their fluid amalgamation of organic and manufactured lines. During a private tour of the exhibition, David Goerk, Director at PACE Gallery explained that Siena has been making small-scale sculptures for years, using grape vines and stems as the core structural element for each construction. Fullness of the grape stem, its natural shape determined the final shape of the sculpture. Many of the smaller compositions, miniature and fragile, compared to their bronze alter egos can be seen at the exhibition.

I find it most rewarding if you see the large sculptures first and then make your way to the miniatures. There is something magical in the process of discovering the organic elements hidden inside the straight lines and you should reward yourself by allowing your eyes identify and trace the ‘synapses’. 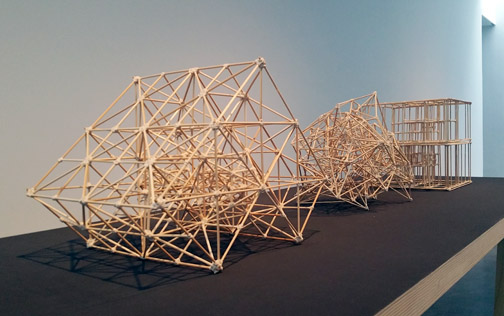 The large sculptures were created at the Walla Walla Foundry in Hawaii where each miniature original was scanned using a 3D scanner and forged using advanced technology. As a result, the expanded iterations mirror every astounding detail of the original, including the texture of the vine’s surface.

“During the fabrication of the bronze and wood works, Siena embarked on a separate body of sculptures using bamboo skewers bound with string. Similar to his painting, each work follows a specific set of rules that constrain his process. In creating the works, Siena tied each skewer together at its vertices, which demanded that he create new tools, used to tie intersections remotely, out of reach of his hands; this process resonates with the meticulous and analogue methods he uses in his painting.”* 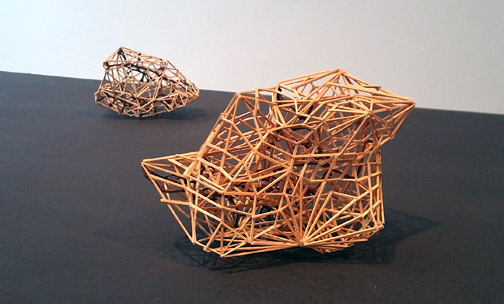 As you progress from one exhibit to the other make sure you pay attention to the shadows cast by the sculptures. They are as important as the materials casting them. Think of them as positive and negative elements of the same composition. In fact without the intricate mazes created by these shadows the sculptures almost seem incomplete. 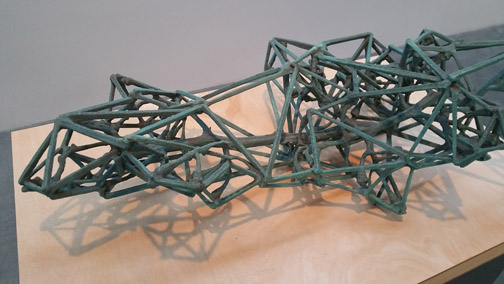 The show is on until April 25th, so make sure you make your way to the gallery before it closes.

Please email us if you’d like more information on the sculptures featured in this article .