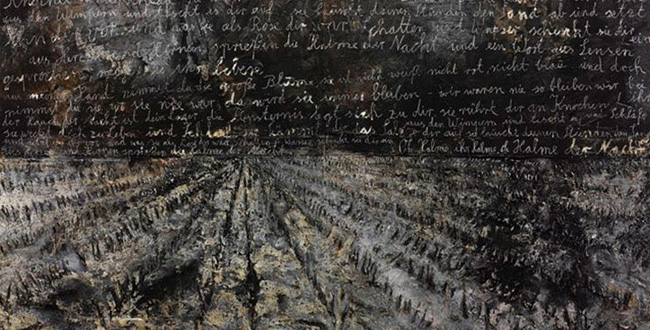 Anselm Kiefer doesn’t simulate volume – he moulds it and shapes it into objects.

Ok, maybe he allows some white in his palette as well, but black is clearly his color of love, fear, hate, hesitation, charge and calm. it is in black that he finds his world and in black that he breathes.  His latest exhibition at the Gagosian Gallery on 21st street consists of very large scale canvases, most of them joined diptychs, that hold large, textural fields of paint that, seen from a distance, form grass, flowers and fields. Anselm Kiefer doesn’t draw the illusion of volume, he sculpts it with paint itself. He drips, scrapes and piles enormous amounts of the medium to create his objects. Through intense chaos, destruction and grit of his black, tar-like mounds of black you are able to make out tactile reliefs of flowers, stems, petals, leaves that rise from the two-dimensional plane of the canvas. They are the allusions to life, survival and air. 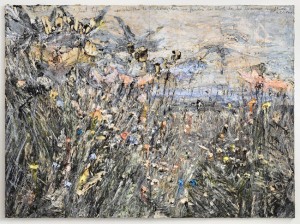 Air, that is almost non-existent in Kiefer’s heavy, both materially and conceptually, work seems to seep through in the form of the pale blues, Naples yellows, hints of Vermillion red and soft brushed spots of a gentle pastel rose, seemingly airbrushed on top of the thick slabs of rich, oily, non-penetratable black. It takes an effort to see these “other” colors, to notice them, to accept them, amidst all the black, gray and white, but they are there, giving the artist and the viewer a path to escape the darkness with all its implied madness, despair and pain.

Despite the intensity and the low chromatic frequency of these paintings, two of the works in particular exude a sense of calm, albeit one has to step quite a bit back to really see the real colors that dominate the painting. You cant’s see them up close two or three feet away from the artwork. At this distance you see the guts of the painting – its insides. To see its outer shell and its face you need space – 8-10 feet or even more, is the ideal distance to see Kiefer’s intended picture. In truth, both are his intended pictures, the inside and the outside just depends on how comfortable you are with the close up.

One composition, O Halme, ihr Halme, O Halme der Nacht has a realistic looking airplane wing protruding from the top of the vast canvas above the blue/yellow/black grass field that grows beneath it. A deeply emotional and somewhat disturbing painting it is also the exhibition’s strongest. Somehow the jarring limb of the plane seems to shield the charred earth beneath it and that sense of protection signals comfort and hope and assigns a nurturing quality to the dark, velvety landscape of black. 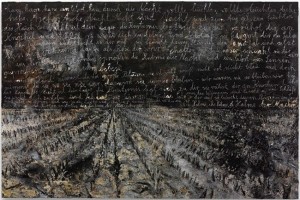 Whenever you look at a painting, always take a moment and look at its sides, the place where the painting ends and the stretcher recedes into the wall. Sometimes you make amazing discoveries that hint at how the artwork was created. In Morgenthau Plan paintings Kiefer has mounted a photograph of the fields near his property in the south of France on the canvas first and then applied paint in thick impasto on top of the paper completely obscuring the images beneath. The thought of having a photograph as the base of the composition was somehow unsettling – almost like Kiefer cheated. It should have been a straight-forward painting, oil on canvas, without the framework of the image beneath it guiding Kiefer in his composition. Issues of conservation came to mind, but these soon dissolved under the near obsessive inspection of the artist’s vision, ideas, pictorial language and rendering. These untamed, stormy compositions are breathtaking in their freedom of gesture and uneven disturbed beauty.

Anselm Kiefer: Morgenthau Plan is on view at the Gagosian Gallery, 522 West 21st street in New York through June 8, 2013.

Images ©Anselm Kiefer. Courtesy of the gallery. This article © galleryIntell.