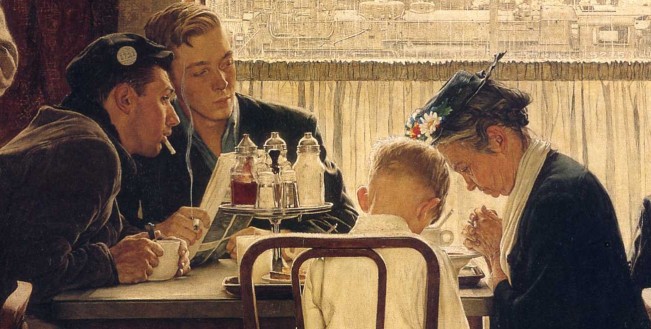 Legendary American artist, Norman Rockwell, takes center stage in our top stories this week as three of his iconic works will be auctioned at Sotheby’s in December. Psst.. These works titled “Saying Grace”, “The Gossips”, and “Walking to Church” are expected to exceed their high estimates. Also, watch out for a new Fernand Leger painting at the Met, Christie’s in China AND a new art fair…

American artist Norman Rockwell’s three most iconic paintings “Saying Grace”, “The Gossips”, and “Walking to Church” will be sold at Sotheby’s this December. These paintings inspired by recognizable and familiar settings, tell stories of cozy “American” life during the forties and fifties. The famous illustrator’s record sale price was $15.4 million in 2006, for “Breaking Home Ties.” Let’s see if the prediction for at least two of these paintings breaking his last record comes true. Exciting! Source: NY Times

“The Village” in a museum

On Thursday September 19th, 2013, The Metropolitan Museum of Art exhibited “The Village” by Fernand Leger in its Modern and Contemporary gallery. Apart from being an important Cubist painting, what makes this announcement striking is that this painting is a supplement to the very generous gift (worth $1 billion!) that Lauder made to the museum earlier this year. He had expressed a desire to add to the collection upon finding the right pieces, et voila, he has kept his word. “The Village”, made in 1914, consists of conical and pyramidal buildings that he made as an homage to France right before his departure to fight in World War I. Thank you Leonard A. Lauder for making such artistic bounty accessible! Source: NY Times

Christie’s Auction House is going to break the ice in mainland China by holding the first auction of Modern and Contemporary art in Shanghai on September 26th. The auction house, which already has a stronghold in Hong Kong, will be offering works by western artists such as Picasso, Warhol, and Alexander Calder, along with Contemporary Asian art. Christie’s is the first foreign auction house to be licensed in mainland China this year and hopes to take advantage of the rising art market in Shanghai (currently Beijing is in the lead). Source: WSJBlog

The Armory Fair is set to debut in New York City from May 8th-11th, 2014. It will be located at the 69th Regiment Armory between 25th and 26th streets on Lexington. The international list of exhibitors will be announced in January. New York City is already home to “The Armory Show” which has been taking place since 1913, and is one of the largest art fairs that takes place in the city.  We are curious to see what this new fair has to offer. Source: Art in America Magazine