Top 10 recommendations from the Jan Krugier Sale at Christie’s

The Krugier sale is what is known as a “single owner auction” where the entire collection is offered during the course of one or two sales sessions. The event is typically surrounded by a series of dedicated PR releases and is accompanied by its own catalogue. This year Christie’s was able to secure the estate of a famous art collector Jan Krugier. The collection focuses heavily on the early to mid 20th century art and features several rare works by Georgia O’Keefe, Pablo Picasso, Otto Dix, Egon Schiele, Wassily Kandinsky and others. Alberto Giacometti’s Nu Debout, a 1958 oil on canvas appears on the cover of the catalogue and is one of our recommendations from the sale.

Click on the images to view them in a slideshow.

As you’d expect, we put together a list of artworks we consider to be smart buys not only for their financial value and the expected rate of appreciation, but also for the art historical importance these works represent. In agreement with recent opinions that certain segments of the art market are overheated, we feel that here too, some of the estimates are rather aggressive. Past sales results are of course taken into consideration, but more importantly it is the work at hand that is considered when trying to gauge its current market value. All in all this sale seems to reflect the season’s overall heavy focus of Picasso and you will see that our top 10 list features 4 works by the Spanish master. 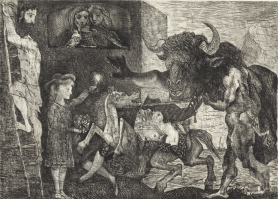 A 1935 etching and engraving with scraper on laid Montval paper, a fine impression of the seventh (final) state. Picasso created these etchings for private use and kept the entire edition of 50 plus artist’s proofs for his own collection. He bestowed more than half of the edition as personal gifts from 1935 through at least the 1960s. At his death in 1973, 23 sheets of the edition of 50 remained unsigned and un-numbered in his studio. An etching from the same run was bought by a private collector from Krujier’s gallery in Geneva and in 2010 consigned to Sotheby’s. It was later given to the Metropolitan Museum in New York.  La Minotauromachie is estimated to sell between $1,000,000 – $1,500,000.

A unique painted bronze bust created in 1951. Jan Krujier bought this painting from Christie’s in November 1997. This is an iconic Giacometti work depicting one of his favorite subjects – his younger brother Diego, who was often credited with having extraordinary patience necessary to pose for one of Giacometti’s portraits. The bust is estimated by Christie’s to sell between $6,000,000 – $9,000,000, which we feel is very aggressive and expect it to place closer to $4,000,000. 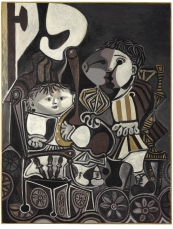 Oil and ripolin on panel, painted in January of 1950. Another iconic Picasso painting in a recognizable style and palette. During the late 1940s and early 1950s, Picasso devoted hundreds of paintings, drawings, and prints to the depiction of his two youngest children, Claude and Paloma, born to his companion Françoise Gilot in 1947 and 1949. The painting was always kept in Picasso’s private collection and came to Krujier directly from Picasso’s grand daughter. This is the first time it’s offered at a public auction. Of course Paloma Picasso is now a well-known figure herself having worked as a jewelry designer for Tiffany’s. But perhaps even more important is the fact that this is not one of Picasso’s “fast paintings”. You can see that quite a lot of time, love and effort went into creating this double portrait. Christie’s estimates this painting to sell between $9,000,000 – $12,000,000 and we feel that the painting’s history, its provenance and current market conditions support this estimate and expect the painting to sell well above the estimated range. 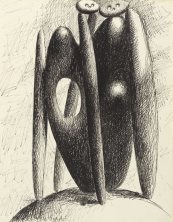 Pen and India ink on paper, 1928. There are two Carnets Cannes, both of which are in the Musée Picasso, Paris. The present pair of bathers is from the Dinard carnet, which was bequeathed to Marina Picasso, the daughter of Picasso’s son Paulo; the sheets were subsequently separated, and this drawing, page 5, together with another fine drawing, page 29 were acquired by Krugier. Our recommendation for this drawing is based mainly on aesthetic reasons. It is a beautifully voluptuous drawing, full of movement and sexuality. The inspiration for the model was Picasso’s young mistress Marie-Thérèse Walter with whom Picasso was nearly obsessed in the summer of 1927. The drawing is estimated to sell between $1,000,000 – $1,500,000. Given that it’s an early work, in a recognizable Picasso style, and the interesting romantic story associate with the model we expect the painting to sell within the estimated range.

A 1958 oil on canvas. This is one of the lots with the highest expectations and the one, as we mentioned earlier, chosen for the cover of the sale catalogue. “A Giacometti painting is, in the end, the sum of countless tentative actions, an unrelenting accretion and layering of pentimenti that ceased only when the painter decided he could proceed no further.” (Christie’s lot notes). Muted, muddy palette with sharp white accents, this painting was a result of Giacometti consolidating his efforts following a crisis he had experienced in his painting while working, over a period of two years, on a portrait which the Japanese professor Isaku Yanaihara had commissioned from him. Around 1950 he chose a few individuals-his wife Annette, his brother Diego, and some close friends-to study their essential human presence, and “to create,” as he stated, “a complete whole all at once” (quoted in J. Lord, A Giacometti Portrait, New York, 1965, p. 59). The work is noted with a very aggressive estimate of  $8,000,000 – $12,000,000. As with the other Giacometti work, we find the estimate to be above the current market for the artist and see the work generating interest closer to $6,000,000 price point. 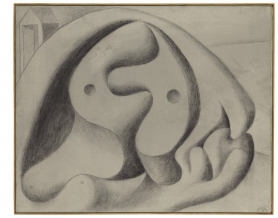 Charcoal and grattage on gessoed canvas, 1931. From Christie’s lot notes: The subject is, of course, Marie-Thérèse Walter, Picasso’s young mistress. Exactly four years earlier, on 8 January 1927, Picasso “came upon the femme-enfant of his dreams: an adolescent blonde with piercing, cobalt-blue eyes and a precociously voluptuous body,” John Richardson has written. “She was seventeen and a half years old. For the next nine years or so, she would be Picasso’s greatest love” (A Life of Picasso: The Triumphant Years, New York, 2007, p. 323). Baigneuse sur la plage, this evocation of Picasso’s year-round sun, moon and sea goddess, is moreover his anniversary portrait celebrating this young woman’s momentous entrance into his life. Marie-Thérèse loved to sunbathe, sleep and dream; Picasso loved to sit by her side and gaze upon her, as she lay sleeping as close to him as she is to the viewer here. “The sleeping blonde paintings of her are lunar,” Picasso told Roland Penrose, “her long neck carries her head like the moon racing through the clouds…like a ball, a satellite” (quoted in ibid., p. 425). The drawing is estimated to sell between $4,500,000 – $6,500,000, but we feel it would sell closer to $4,000,000.

Oil on canvas, 1938.
The surrealist masterpiece is very well priced and represents one of our strongest recommendations from this sale. From Christie’s lot notes: “The motifs that Tanguy paints in his compositions are prolific cellular forms–part organic, part weirdly engineered constructions–that inhabit the vast landscape of no known place. Rendered in meticulous, modeled detail, these bizarre things, or perhaps creatures, manifest the illusion of possessing real substance and their own kind of living existence-ostensibly static, they give the impression of being capable of evolution, growth and even movement, albeit at an imperceptibly glacial pace. In Je te retrouve objet trouvé (“I find you found object”) a quartet of oddly amalgamated beings, some more complex than others, have assembled on a curved lunar plain. Each grouping casts a shadow on the gray earth and is also echoed at the left by spindly doppelgangers. The smallest upright form ressembles a disembodied eye, perhaps a reference to the search that the work’s title implies, and maybe the horizontal form at the lower center edge is the objet trouvé that has been found. The found object was of course most readily associated with a non-art object with little or no modification that were employed by Picasso in his cubist collages and Duchamp in his ready-mades.” We see the painting selling around the $1,000,000 mark. 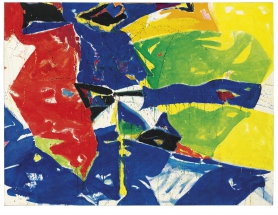 Rounding out the recommendations are Lot No. 38 – Alexej von Jawlensky’s Stilleben mit Hyazinthe, blauem Krug ind Äpfeln, an oil on canvas, circa 1912. The estimate looks a little on the aggressive side, but it should generate enough interest in the $800,000 range. Lot No. 39 – Sam Francis’ Untitled, oil on canvas is priced with a low estimate of $2,500,000 – $3,500,000, so it should definitely find a buyer in that range. The painting is less fluid or layered than some of Francis’ other works so that may be the detracting factor in its appeal, but its size and energetic palette should compensate for the rigidity of the Matisse-like color blocks. And the last item on our virtual shopping list of recommendations is the Kandinsky Landscape. Lot No. 41 Vassily Kandinsky’s Herbstlandschaft is a medium size oil on canvas from 1911 – a pivotal year in the artist’s career that determined his final shift towards absolute abstraction. The painting is estimated by Christie’s to sell for $20,000,000 – $25,000,000 but we feel the painting would be an attractive investment in the mid teens.

If we were to make it the Top 12 list instead, which we are not, we would have likely included Lot No. 50 Edward Hopper’s Dune at Truro, a watercolor and pencil work on paper (we feel a $150,000 range is more appropriate for this work, against the $300,000 – $500,000 estimate range) and Lot No. 51 Georgia O’Keefe‘s small, and delicate Ghost Ranch Cliff  that looks to have a rather low estimate. The 1952 Georgia O’Keefe oil on canvas is deceiving in its medium. The painting is a breathtaking exercise in weightlessness that appears to shimmer with an iridescent glow.