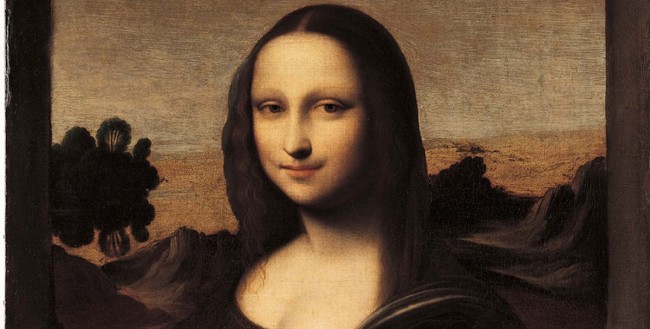 In the top art stories this week, we found some rather interesting art news.Overall, the week was replete with strong auction house report cards and discoveries and analyses of paintings – both, recently discovered and newly hacked. Read on to find out more.

This week’s auctions at Sotheby’s & Christie’s in London delivered top notch results. Gerhard Richter’s ‘Abstraktes Bild’ (1992) & Francis Bacon’s ‘Three Studies For A Self-Portrait’ (1980) were the stars at the Sotheby’s auction, selling for $13 million & $ 22 million respectively. This buoyed the auction, which totaled a sum of $117 million by the end of the evening. Artinfo. Richter was the star at the Christie’s auction the following day as well and Jean-Michel Basquiat’s ‘Museum Security (Broadway Meltdown)’ was the talk of the evening as it sold for $15 million. Artinfo.

How can there be a Valentine’s Day without a few hearts?

Tracey Emin, ‘I Promise to Love You Forever’

This year, massive neon billboards bearing phrases from “I Promise to Love You” series by contemporary British artist Tracey Emin were installed all across Times Square. Between February 1 to February 15, these neon signs (shall we call them artworks?) light up every night for 3 minutes exactly at 11:57 pm. How romantic! CNN wrote in their post that this is yet another of Emin’s projects that “pushes the boundaries”. Maybe they should not look too deep into the meaning behind neon signs on Broadway. Sometimes a heart is just a heart. The signs were specially animated for the Times Square displays. CNN.

The Louvre will be returning seven Nazi-looted artworks to the owners’ families. The French government approved the return of ‘The Miracle of Saint Eloi’ by Gaetano Gandolfi and ‘Saint Francis of Paola’ by Francesco Fontebasso (shown on the left), and five other paintings, including ‘Portrait of Bartolomeo Ferracina’ by Pietro Longhi and ‘The Temptation of St. Anthony’ by Sebastiano Ricci, held by the Louvre after years of research on the paintings’ provenance to confirm ownership. Six of these artworks are owned by Richard Neumann, an Austrian Jew who sold the paintings at a fraction of the value to escape the country during WWII.  BBC

George Bush, ‘Self-Portrait in a Shower’

After a hacker accessed George W. Bush’s personal emails, the world saw Bush’s self-portraits for the first time. He’s no Picasso or Modigliani, and most probably did not intend to paint masterpieces. His paintings seem to be depictions of his personal space and moments of reflection. Are the paintings good or bad? The answer is subjective, as everyone is entitled to an opinion. Interestingly, Jerry Saltz has a positive review with an almost direct message to Whitney Museum of Art to acquire the paintings. Vulture.

Will the real Mona Lisa please stand up?

After months of deliberation, debate and tests, experts have announced that the ‘Isleworth Mona Lisa’ is an earlier version of the famous da Vinci portrait! Zurich-based Mona Lisa Foundation claims that this painting has been made 20 years before the iconic ‘La Gioconde’ that we all thought was the only version that ever existed. According to Leonardo’s early biographer Giorgio Vasari, Leonardo had started to paint Mona Lisa in 1503, but “left it unfinished”. However, a fully finished painting of a “certain Florentine lady” surfaced again in 1517, shortly before Leonardo’s death and in his private possession. The latter painting almost certainly is the one that now hangs in the Louvre. Huffington Post.