The Truppe Fledermaus & the Carnival at the End of the World

I spent yesterday afternoon wandering the dimly lit halls of New York City’s Park Avenue Armory, taking in what the galleries brought to show and sell at AIPAD 2015. One gallery that caught my attention was the Los Angeles based Kopeikin Gallery with its casual installation of photographs by the creative team of Nicholas Kahn and Richard Selesnick. The duo creates layered, multi-character narratives set in different time periods and then proceeds to cast, stage and photograph the scenes from the constructed stories. Each narrative has a title and features around 100 frames within the story. The series on display at Kopeikin Gallery is called ‘Carnival at the End of the World‘ and contains 106 individual leafs. Each one made me feel like I was looking at stills from a yet-to-be-shot Terry Gilliam movie. 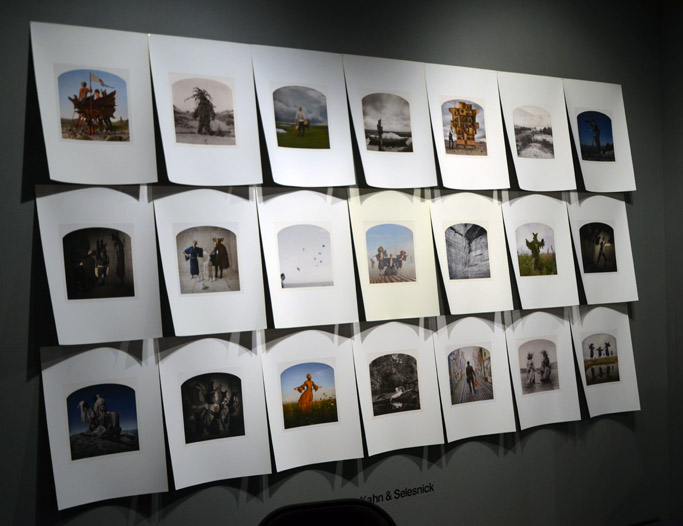 Each image is 10 x 10″ archival inkjet print issued in an edition of 5. Sometimes Kahn & Selznick appear in the images alone, sometimes accompanied by a cast of fantastical characters, not necessarily all belonging to the same time or place. Phenomenally, each image almost appears to have its own soundtrack. Sometimes it’s just the sound of the wind rushing through open planes, sometimes it’s actual notes. As bizarre as it sounds, if you concentrate on each composition, you’ll hear it. 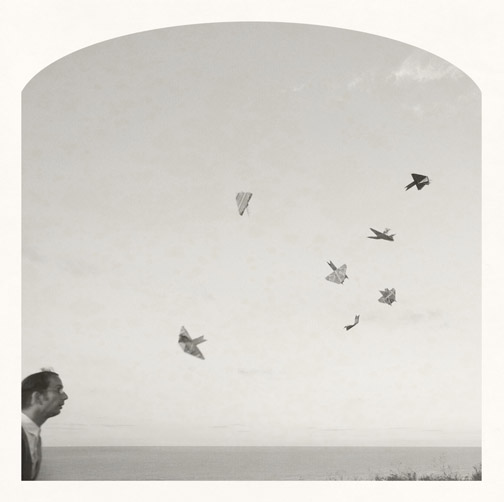 The gentle sloping curvature on the top suggests that all action within each frame takes place on a theatrical stage, thus removing the first-person interaction and assigning a viewer a very specific role: we are to retain our distance and observe. Kahn and Selesnick’s previous series ‘Mars: Adrift on the Hourglass Sea‘ featured very different characters, proportions, palette and time.

As Paul Kopeikin explained, the duo shoots these images all around the world, including Paris, Upstate New York, New Hampshire and counts Gillian Andersen and Michael Stipe among collectors of their work.

Photographs from ‘Carnival at the End of the World‘ come in different sizes. The website lists 10 x 10″ prints for $2,000, which is a fantastic entry point for young collectors and people looking to expand their collections to include photographs. The larger images are 36 x 36″ and are also very well priced at $5,000. Considering that the edition is very small, yet offers a great range of options, I feel that these works would make a great set to consider for any level collector, beginners included.

Artists’ statement about this series is on page 2